LOS ANGELES — The expression “it takes two to tango” holds true in boxing, in or out of the ring, which is why a press conference held on Monday for Miguel Cotto and Ricardo Mayorga’s junior middleweight fight was uneventful.

It appears that Cotto, who will defend his WBA title against Mayorga at the MGM Grand in Las Vegas on Saturday, does not wish to dance with his wild and irreverent opponent until it’s time to step into the ring.

Nobody doubts that the hard-punching veterans will mix it up once the bell rings for their showdown, but only one of the fighters wanted to engage during Monday‘s press conference at the Millennium Biltmore hotel.

It’s no surprise that it was Mayorga who did all of the talking — along with his promoter Don King — before the L.A. media. The brash fighter and bombastic hall-of-fame promoter were in rare form, but Cotto would not play along. 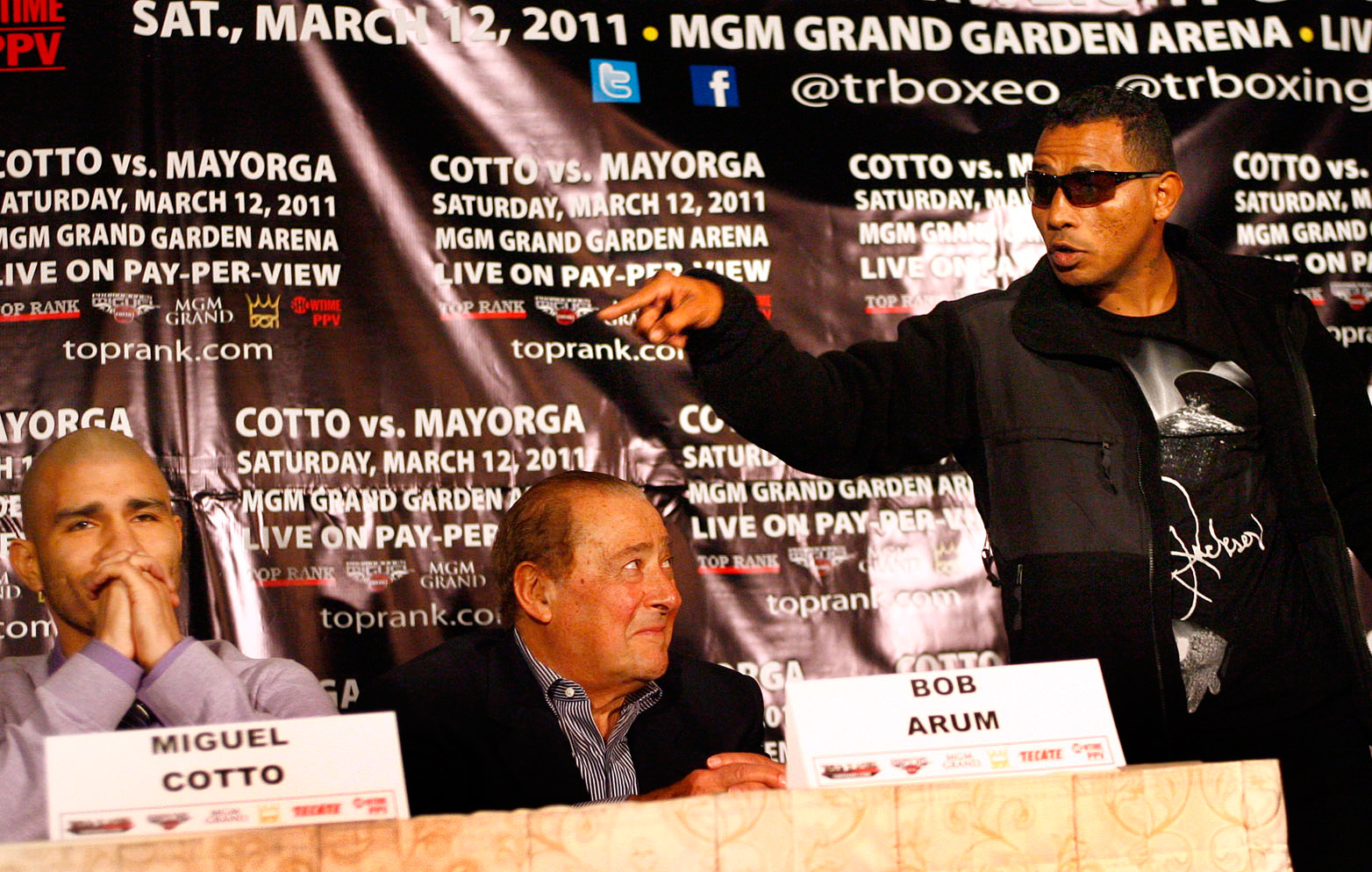 The Puerto Rican star, who did his one-on-one interviews before the press conference began, said very little during his turn behind the podium and then left the downtown hotel as soon as the media event ended. He didn’t even bother with the customary staredown.

Cotto’s brief L.A. appearance may have been influenced by what happened the last time the two fighters posed for pictures, at a press conference in Puerto Rico on Jan. 20, when Mayorga shoved him in the chest after trying to snatch his title belt.

However, Lee Samuels believes Mayorga’s words had more to do with Cotto‘s quick departure on Monday than any roughhouse tactics.

“Things got a bit out of hand during the press conferences in Puerto Rico and in New York City,” said Samuels, a longtime publicist for Top Rank, which promotes Cotto. “Mayorga pointed to Miguel’s mother, who was at both press conferences, when he told Miguel ‘Don’t let your mom or your family suffer anymore by watching you get in the ring.’ In Puerto Rico, he told her directly that ‘You’re suffering is almost over. You won’t have to watch your son get beat up the way he did against Antonio Margarito and Manny Pacquiao anymore, because I’m going to retire him once and for all.’

“Miguel didn’t like that. He and his mother are very close, especially since Miguel’s father passed away, not long after the Pacquiao fight. He engaged with Mayorga a little bit at those press conferences, in part because Mayorga singled out his mother, but I think for this one he just decided that he wasn’t going to lower himself to (Mayorga’s) level.”

Mayorga (29-7-1, 23 knockouts) has been known to stoop pretty low when it comes to drumming up interest for his fights.

He targeted the recently deceased mother of Cory Spinks before their fight in December of 2003, threatening to reunite the two. He had choice words for Oscar De La Hoya’s wife before their 2006 showdown. And Mayorga exchanged more than insults with Fernando Vargas, who clocked him with a hard right cross prior to their fight in 2007.

Mayorga didn’t have Cotto’s mother to kick around at Monday’s presser, but he still hit below the belt with his comments to the proud Puerto Rican.

“Don’t take a knee on me like you did with (Antonio) Margarito,” he told Cotto. “Let me finish punishing you.”

Cotto simply dismissed Mayorga as an “idiot” (in English) when it was his turn to address the media.

Reserved and serious by nature, the 30-year-old veteran obviously doesn’t believe he has to raise his voice or make threats to sell Saturday’s fight, which will be broadcast live on Showtime PPV.

Bob Arum, who has promoted Cotto since the 2000 Olympian turned pro in February of 2001, says the fighter attracts fans with his fists, not his words.

“With the exception of Manny Pacquiao, Miguel Cotto is the greatest attraction in boxing,” Arum said. “Last year his fight with Yuri Foreman was HBO’s highest rated boxing show. There’s a reason for that: When Miguel Cotto is in the ring the fans know they are going to see an all-action fight no matter who the opponent is.”

That’s true, but who Cotto (35-2, 28 KOs) has fought has a lot to do with some of the record gates he’s helped to produce over the years.

Although the 37-year-old veteran upset Forrest to earn THE RING welterweight title in 2003 and defended the belt against the deceased former champ, he lost it to Spinks and was brutally knocked out by De La Hoya, Trinidad and Mosley. 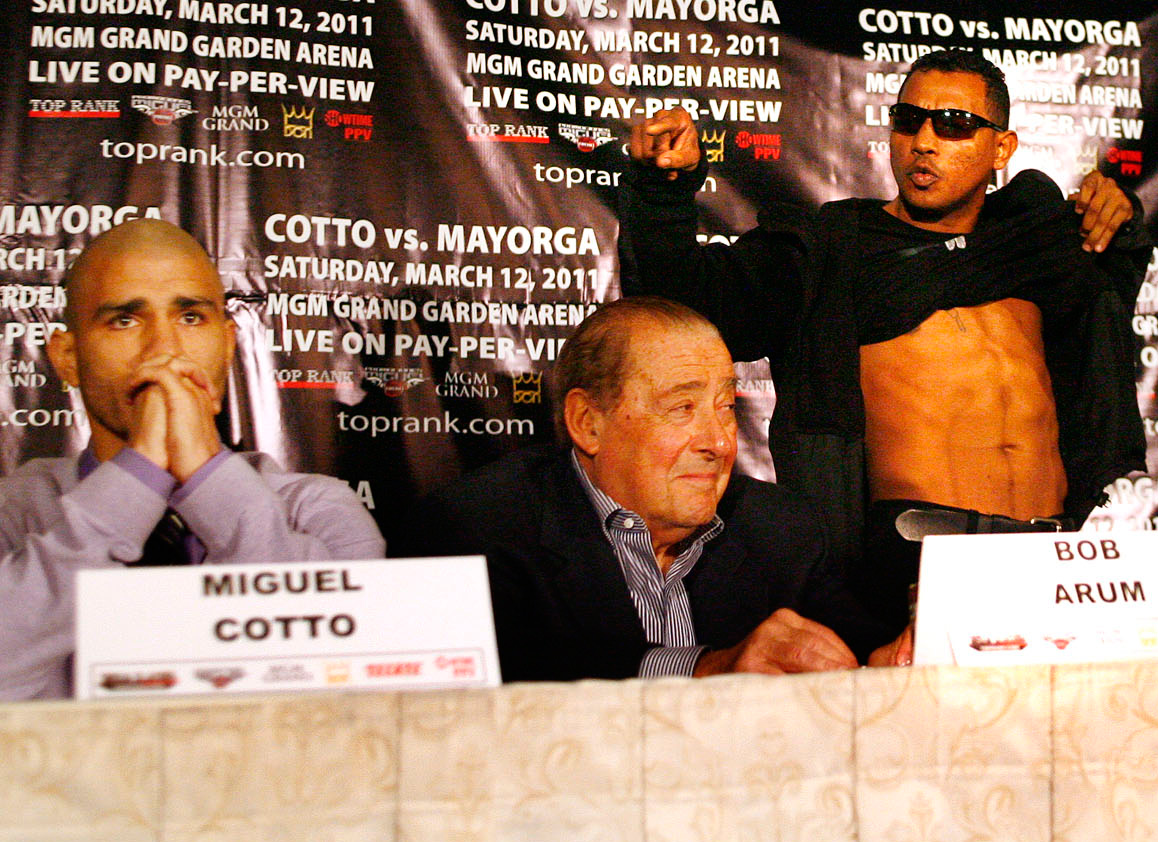 Judging by the manner in which King held court for the majority of Monday’s press conference the 79-year-old promoter still has “it,” but the jury is out on whether Mayorga has anything left when it comes to plying his craft.

The Nicaraguan’s trainers believe that he does and they swear that he is in the best shape of his career.

Mayorga lifted his shirt and exposed a washboard stomach in an attempt to prove their words. He tried to get Cotto to do the same but the star of the show ignored him.

Like the fans, Mayorga will have to wait until March 12.

Relentless: Cotto-Mayorga will be produced and distributed by Showtime PPV, beginning at 9 p.m. ET/6 p.m. PT.

THE RING’s No. 6-rated junior middleweight Yuri Foreman (28-1, 8 KOs), who hasn’t fought since losing to Cotto last May, makes his ring return against Pawel Wolak (28-1, 18 KOs) in a scheduled 10-round bout.

Clottey’s out: Training injuries forced Joshua Clottey to pull out of a scheduled 10-round junior middleweight bout against Calvin Green that was slated to be on the non-PPV undercard of Cotto-Mayorga.

The former welterweight beltholder from Ghana sprained his ankle and wrist when he tripped on a pothole while doing his roadwork in the Bronx, where he trains.