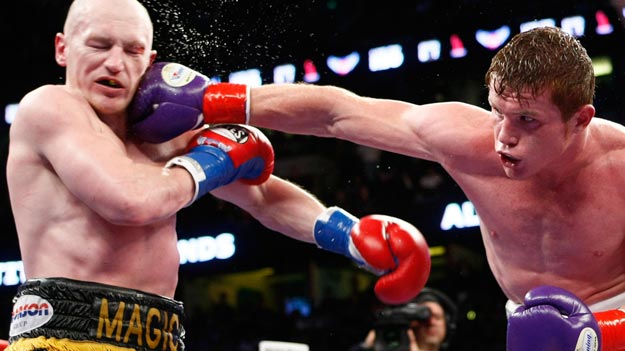 Saul Alvarez: Strip away the fact that the Mexican sensation is overhyped and won a belt that should never have been at stake and you get a nice performance by a talented 20-year-old who is still learning how to fight. Sadly for Alvarez, that’s not how most people perceive him. Many see him as the next Mexican star, which would be difficult for anyone to live up to. Alvarez probably didn’t live up to expectations against Matthew Hatton on Saturday in Anaheim, Calif., on HBO. Everyone expected the bigger, more-gifted fighter to score another spectacular knockout. When he didn’t, the fans were disappointed. I suspect Alvarez can live with that. He easily won the fight, claimed his first major title and had another valuable learning experience. Not a bad night, really.

Matthew Hatton: The younger brother of Ricky Hatton came into his fight against Alvarez on a roll, having gone 8-0-1 against mostly solid opponents in his previous nine fights and claiming a European title. He was exposed for what he is on Saturday, though: A fringe contender at best. His argument that he never had a chance because of the size difference carries some weight, particularly after Alvarez came in 1.8 pounds over the agreed-upon limit. That only goes so far, though. A welterweight fighting a smallish junior middleweight isn’t completely out of line. The fact is Hatton had neither the size nor ability to cope with his younger foe, the result of which was a one-sided decision. He deserves credit for surviving; his conditioning and will were impressive. Nothing else about him was impressive, though, at least not on Saturday night. 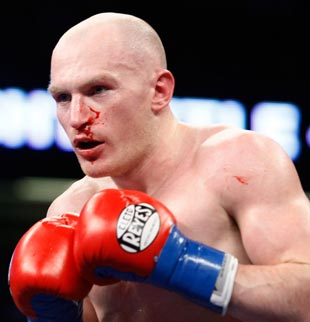 WBC belt: We should thank Jose Sulaiman. The WBC president’s decision to serve up his junior middleweight title to the Alvarez-Hatton winner revealed in the clearest terms how meaningless sanctioning-body “championships” are. The once-precious belts already are watered down to a ridiculous degree because of their sheer number, 68 or more if you count the silly titles Sulaiman and Co. continue to manufacture. And that’s compounded by never-ending manipulation of ratings to generate as much profit as possible, as Sulaiman did here. He elevated Alvarez to No. 1 not because of his accomplishments but because he’s extremely popular in Mexico, which translates to money in Sulaiman’s pocket. No one was fooled. Sulaiman’s garish green belt has never been more unattractive.

Adrien Broner: No one should object to the official decision that gave Broner a victory over Daniel Ponce de Leon on the Alvarez-Hatton undercard. The talented Cincinnati fighter landed the sharper punches throughout a close fight. And we must give him some credit for beating a tough, battle-tested veteran who also delivered a good performance. That’s where any praise stops, though. Broner is a big talker, which is OK if you back it up. I’m not sure he did so in his first fight on premium cable. He was the bigger, faster and presumably better fighter but rarely fought like it. Instead, he showed de Leon too much respect. He fought tentatively, waiting too often for de Leon to make the first move. And he simply didn’t throw enough punches to take charge of the fight. This was an opportunity for Broner to show the world how good he is. In the end, he didn’t show us much.

Tony Crebs: Consensus on press row after the 10-round Broner-de Leon fight was that anything between 96-94 for Broner – the official score of two judges — and 96-94 for de Leon was reasonable. That’s why everyone was shocked when the score of judge Tony Crebs was announced: 99-91 for Broner. Crebs gave de Leon the first round and Broner every round thereafter. The fight was difficult to score for most of us because Broner’s punches were sharper while de Leon was far more active and also effective, a balance that wasn’t reflected in Crebs’ curious scoring. Incompetent? I don’t know. I suppose everyone has an off day, even big-time boxing judges. Crebs’ day was WAY off.

James Kirkland: Kirkland said he had recurring dreams during his two-year hiatus from boxing about exchanging punches in the ring once again. When it actually happened, it became Ashandi Gibbs’ worst nightmare. The former junior middleweight contender unleashed two years of pent up frustration during 34 seconds of mayhem, leaving Gibbs a broken heap in the first round of his comeback fight on the Alvarez-Hatton undercard. Kirkland must’ve crammed 50 punches into the half-minute fight, picking up where he left off when he last fought in 2009. Gibbs never had a chance. Kirkland’s handlers – including new trainer Kenny Adams — want him to fight as much as once a month and don’t rule out a title fight as soon as this year. No one knows how he’ll do but it will a fun ride as long as it lasts. “A REAL fun ride,” Adams said after the fight.

Ismayl Sillakh: Sometimes it’s enjoyable just to sit back and watch a beautiful boxing exhibition. The Ukrainian light heavyweight used one of the best jabs in boxing, sharp combinations and perfect body shots to easily defeat a very good opponent in Yordanis Despaigne on the Friday Night Fights card. I don’t think the performance was perfect. I think Sillakh showed Despaigne too much respect after he put the Cuban down in the second round. I thought he could’ve built on that, broken Despaigne down and then stopped him at some point. And I’m not sure he has the punching power some believe he has. I’m nitpicking, though. The one-time amateur star is still developing as a professional, which should be a frightening notion for other top light heavyweights. He clearly has the tools to become a star.

Klitschko-Haye: The Wladimir Klitschko-David Haye fight reportedly is set for June 25 or July 2 in Germany. This the next best thing to Pacquiao-Mayweather, probably better if you’re European. It might be the biggest and most-meaningful heavyweight matchup since Lennox Lewis pummeled Mike Tyson in 2002. That’s a long wait for those of us who remember when the big boys ruled the sport. I still say that Haye will fare only marginally better than Klitschko’s other recent opponents – if that. You don’t struggle to outpoint Nikolai Valuev and then beat Klitschko. That doesn’t really matter, though. The perception is that this is a real fight, not just one more monotonous demonstration of Klitschko’s chilling ability to dismantle smaller opponents. The world will be captivated. And it’s about time.

Pongsaklek Wonjongkam: The future Hall of Famer has been in THE RING’s flyweight ratings for 520 weeks – 10 years. The fact he could make 112 pounds all these years is remarkable in itself. Consider these other tidbits, though: He has held a major title for roughly eight of those years, he is 41-1-1 since he first won a title and he’s 19-1-1 in non-interim title fights against the best flyweights in the world. Impressive? Some believed he was on the decline when he lost the title he held for seven years to Daisuke Naito and then drew with him in a rematch. However, he stunned respected Koki Kameda in March of last year to regain the belt and has successfully defended once. Once again some believe the Thai wonder (79-3-1, 43 KOs) is ripe for a setback. Don’t ever count him out, though. He has been at the top of his field for so long for a reason.

David Haye: “Klitschko is ready made for me. I eat tall, chinny Eastern European heavyweights for breakfast. Wladimir is a fighter that doesn’t like to fight.” Uhhhh, OK.