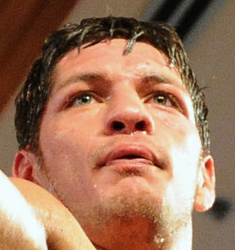 This photo appears to show the clash of heads that caused a cut above Evander Holyfield's left eye in the second round of his fight against Sherman Williams on Saturday. Photo / Tri Nguyen

A cut ended Evander Holyfield’s night early on Saturday in White Sulphur Springs, W.Va. It might also have saved him from a beating.

The former heavyweight champion’s fight against Sherman “The Tank” Williams was stopped after three rounds and declared a no-contest after Holyfield said he couldn’t see because of blood from a gash below his left eyebrow.

“I couldn’t see because the blood was coming in my eye,” he said in the ring afterward.

The referee said the cut was caused by a clash of heads in the second round and replays seemed to confirm it, although Williams (34-11-1, 19 knockouts) said it was the result of a counter right. Officials didn’t go to the scorecards because the fight didn’t go the required four rounds for a decision.

That might’ve been a significant break for Holyfield (43-10-2, 28 KOs). Williams, a squat Bahamian, appeared to win at least the second and third rounds by landing a number of hard overhand punches to the head and several body blows, one of which shook the old man.

Holyfield didn’t appear to be seriously hurt at any time and it would be difficult to predict what might’ve happened in the remainder of the fight. However, the fact he was unable to avoid heavy punches didn’t bode well, particularly because he had difficultly landing his own punches.

Williams seemed to be gaining confidence every second before the fight was stopped. Thus, when it was stopped and then declared a no-contest, he was clearly frustrated.

Afterward, Holyfield said he would be willing to give Williams a rematch. However, Holyfield has a fight against Brian Nielsen scheduled for March 5 in the Denmark. He said he didn’t know whether he’d be able to go through with it because of the cut.

“I cut him with the counter punch, the counter right. I split him open,” Williams said. “Now what can we do for a rematch? ÔÇª Let’s bring the fight to Atlantis [a resort in the Bahamas], Holyfield-The Tank, Part II.”

Holyfield was coming off an eighth-round knockout of Francois Botha last April, although he lost his previous two fights (a one-sided decision against Sultan Ibragimov and a majority decision against Nikolai Valuev).