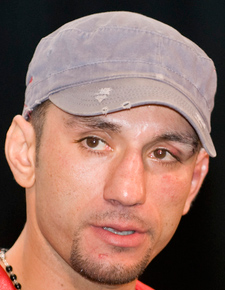 Sergio Mora knows he blew it in the biggest fight of his career, his junior middleweight showdown with Shane Mosley last September.

Mora, who held Mosley to a split draw, did enough to contain the future hall of famer’s offense but he didn’t throw enough punches of his own to convince two judges and many observers that he deserved to win the uneventful 12-round bout.

The former junior middleweight beltholder believes he can make up for his overly tactical performance against Mosley by engaging fellow Contender alum Bryan Vera in an entertaining fight on the Feb. 4 edition of Friday Night Fights.

The 10-round super middleweight bout takes place on the Friday of Super Bowl weekend in Fort Worth, Texas, not far from Cowboys Stadium, where the big game will be played. So Mora (22-1-2, 6 knockouts) understands that the Convention Center, where he’ll face the Fort Worth native, will be buzzing with general sports fans, and the ESPN2 broadcast will probably do strong ratings. He doesn’t want to let those fans down.

“I’m going to get hit more in this fight than in previous fights of mine, but I’m also going to make it a more-exciting fight,” Mora told RingTV.com after a brisk seven-round sparring session Wednesday at Fortune Gym in Los Angeles. “I’m going to settle down and just do more punching than fans are used to seeing from me.”

Mora’s ring identity has always been that of a pure boxer. The 30-year-old East L.A. native wasn’t blessed with KO power, as his record clearly indicates, so he developed a non-confrontational style that enhances his natural abilities — speed, reflexes and, most importantly, his intelligence.

His herky-jerky style served him well enough to win the first season of The Contender reality series and a major belt from the late Vernon Forrest, so why the change of heart now?

It turns out the sting of criticism bothers Mora more than the numbing pain of taking punches in the ring.

While he believes that he clearly out-boxed Mosley, he came to realize a few days after the fight that it didn’t matter who won. The bottom line is that the fight was dreadfully boring, and it was mostly his fault. Mosley did his part to make it a fight; Mora didn’t.

“I could have done a lot more in the Mosley fight,” Mora said. “I realized that once I watched the fight. I never watch tapes of my fights, but there was so much debate and so much criticism about this fight that I had to break my own rule and watch it. I closed myself in for two days after the fight and just watched a DVD of it over and over again. I saw that I could have planted my feet more. I could have thrown more punches.

“I followed my game plan, which was not to let Mosley set himself up to punch. We wanted him to load up and reach with his right hand so I could counter him, and that’s what I did. But I realize that I disappointed a lot of people by sticking to that game plan to a tee.”

Veteran broadcasters Jim Lampley and Larry Merchant, who provided the commentary for the live HBO Pay-Per-View broadcast in the U.S., were disgusted by Mora’s unwillingness to stand and trade with Mosley, and they had no problem expressing it during the fight.

Mora admits that he deserved much of their harsh criticism but he believes some of it could have been directed at Mosley.

“It was ugly on both our parts,” Mora said. “I wasn’t the only one initiating clinches. I could’ve done more, but I have to be honest: I thought Mosley would give me no choice but to fight back and he didn’t. I expected more from Shane. I expected the legend, the beast, but he was missing as much with me as he was with Floyd Mayweather.”

Mora was content with making Mosley miss without making him pay during the fight. Now he knows better.

“I’ve always been about making a dude miss like never before but those days are over because nobody appreciates that,” Mora said.

He will try his best to rekindle fan interest against Vera (17-5, 11 KOs), a participant of the second season of The Contender who has lost four of his last six bouts. However, it should be noted that all but one of the rugged Texan’s opponents — Canadian veteran Sebastien Demers, who he stopped in three rounds — were unbeaten prospects, including James Kirkland and Craig McEwan. Vera was competitive in most of his losses, game in all of them. One of those undefeated hotshots he faced, Andy Lee, was overwhelmed by his relentless pressure and stopped in seven rounds.

Mora is looking forward to facing that aggression.

“You’re going to see me use my jab and my left hook more in this fight,” he said. “I didn’t use those punches against Mosley. I will against Vera, who’s going to come at me in every round.

“That’s what I want. I took this fight on short notice because it was a hometown guy known for exciting fights on a huge sports weekend. It was exactly what I needed after the Mosley fight.”

Doug Fischer can be contacted at [email protected]