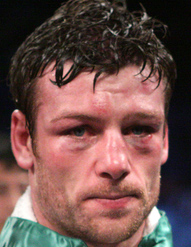 Duddy, a former middleweight contender who lost a one-sided unanimous decision to Julio Cesar Chavez Jr. in his last bout last June, was scheduled to fight fellow Irishman Andy Lee in the HBO-televised co-feature to the Martinez-Dzinziruk bout from the Foxwoods Resort Casino in Mashantucket, Conn.

It was a good style matchup, as both Duddy and Lee are offense-minded boxers, one that most boxing writers beleived would outshine the expected tactical battle between RING middleweight champ Martinez and 154-pound beltholder Dzinziruk.

However, Duddy did not feel the same enthusiasm for his March 12 fight that fans and media felt. And that was sign for him to move on.

“I no longer have the enthusiasm and willingness to make the sacrifices that are necessary to honor the craft of prizefighting,” Duddy wrote in the opening paragraphs of the retirement statement that was sent out on Tuesday. “I used to love going to the gym. Now it’s a chore. I wish I still had the hunger, but I don’t. The fire has burned out. And I know myself well enough to know that it won’t return.

For DiBella, who struggled to find an opponent for Martinez that HBO would approve, had to change locations of the card (from Madison Square Garden's WaMu Theater to Foxwoods), and recently learned that the WBC stripped the middleweight champ of their title, news of Duddy's retirement was just another headache.

However, the New York-based promoter doesn't hold anything against Duddy.

“On one hand, I'm shaken up as the promoter of the event,” DiBella told RingTV.com. “News of Duddy retiring is more stress from a show that's already caused me considerable stress. But as someone who's known John since he first turned pro, I wish him well.

“He says that he doesn't have it anymore. He doesn't feel it in his gut and he doesn't want to fake it. I respect that, because a lot of other fighters who feel the same way would have gone through with the fight just for the money and not given 100 percent, which is akin to fraud. So I give Duddy credit for his honesty and for knowing when it's over.”

However, while Duddy's seven-year pro career has come to an end, DiBella's show must go on, and right now it is without a televised co-feature.

DiBella is already thinking of marketable substitutes for Duddy. Peter Manfredo Jr., who is coming off an ESPN2-televsied decision victory over Daniel Eduoard on Jan. 14, was his first choice.

However, the popular Rhode Island native, who is a strong draw in Connecticut, suffered facial lacerations in his fight with Eduoard that prevent him from training enough be ready for the March 12 date.

McEwan (19-0, 10 knockouts), who is coming off a close 10-round majority decision to Danny Perez last July, is tentatively scheduled to fight on the undercard of Amir Khan's next 140-pound title defense in Manchester, England on April 16.

“If McEwan isn't available I might look to find a British contender to fight Lee,” DiBella said. “I don't know who's out there. I have to do some research but I think a British fighter versus an Irish fighter near St. Patrick's Day will sell tickets.”

Who knows who will ultimately replace Duddy on March 12? One thing fans can count on is that the 31-year-old veteran, who compiled a 29-2 (18) record while routinely drawing crowds of 5,000 to Madison Sqaure Garden's WaMu Theater, where he fought nine times,
will not change his mind or make a comeback later in the year.

Duddy is at peace with his decision.

He made that much clear in his retirement statement:

“Barry McGuigan was one of my childhood heroes,” Duddy wrote in the closing paragraphs of the release. “His photograph was one of the first things that visitors saw when entering our home in Derry (Ireland). He had great influence on me when I was a boy.

Barry McGuigan once said, “Fighters are the first people to know when they should retire and the last to admit it.”

I know that it’s time for me to retire from boxing, and I’m admitting it.

I’m fortunate to have had the support of many good people throughout my career. To my fans; to the people in the boxing business who have been part of my team over the years; and most of all, to my wife Grainne and the rest of my family; thank you for your love and support.

I give you my word; I will not come back.”