Holyfield should be allowed to fight, whether we like or not 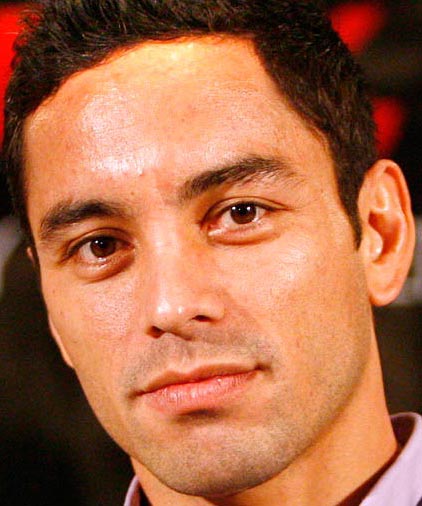 There is no shortage of hand-wringers and head-shakers aghast at the reality that 48-year-old former cruiserweight and world heavyweight champion Evander Holyfield will meet rough journeyman Sherman Williams in a scheduled 12-round bout Jan. 22 in White Sulphur Springs, W. Va.

This is the sort of thing that keeps boxing in the gutter and out of the mainstream, they cry, and it’s no wonder the rest of the sports world can’t respect the fight game. How could it when this sort of thing is allowed to go on? And so on.

Holyfield, of course, has heard this before. He’s been hearing it for 15 years. He heard it all the way back in 1995, when Riddick Bowe stopped him in their rubber match. He was 33 then. Two fights later he knocked out Mike Tyson in one of the great upsets in sport.

He heard it when Lennox Lewis outpointed him in their rematch in 1999, and when Chris Byrd, James Toney and even Larry Donald beat him one after the other in ’02, ’03 and ’04. By the time Sultan Ibragimov, if you can stand it, boxed circles around him in ’07, everyone had more or less quit trying to convince him.

So a year later he went out and fought towering hairball Nikolay Valuev to a standstill in Switzerland, doing at least as well against him as did David Haye, who totes around the alphabet strap that once was Valuev’s and could just as easily be in Holyfield’s possession, thank you very much.

It’s true that even those days are almost certainly gone now, when Holyfield could hope to get the right high-profile opponent on the right day and make a good showing like he did against Valuev. But that’s not really the point. If you want him to quit, you’re going to have to come up with something that hasn’t been said or tried before.

“There’s really nothing to say to the person who came up with the idea that you can stop people from doing things that they want to do,” Holyfield told RingTV.com last week. “I would like them to respect the fact that I wouldn’t get in a fight if I didn’t think I could win it. I don’t get into things unless I believe I can win. I have that kind of respect for myself — to do the right things to win.”

Ask him if he worries about the long-term effects of getting punched on the head, and he doesn’t miss a beat.
“No, I don’t, because God is with me and I believe that the word of God says ‘fear not.’ If I get all caught up worrying about getting hurt, I should stop boxing all together,” he said.

“You have to take chances if you’re gonna win. I got a good defense, I can keep from gettin’ hit. But how am I gonna win the fight? I can compete. Everyone knows I can compete, if I just want to compete. But I want to win. But you can’t win taking no kind of chances.”
Don’t mistake Holyfield’s single-mindedness for delirium. He knows he’s an old athlete. He hired trainer Tommy Brooks in a nod to the indignities of old age. He said Brooks knows him and knows where he has been and what he has done and that when he has to take a break, it’s not because he’s being lazy. As if anyone could accuse him of that.

“He knows me and knows I work hard, and when I say enough, it’s enough,” Holyfield said. “At 48, things change. I can’t run every day, and I can’t do the same things I used to. I can’t keep that same tempo. I’m strong enough mentally to get to the first bell, but I can’t wear my body out to the point where my body can’t recover and have what it takes to win the fight.

“You got to be careful you don’t tear your body down and get injured,” he said. “So it might take you two days to recover where it used to take you one. But you learn to do things that inspire you to let you know you still have it.”
There is no one outside of Holyfield himself who believes he still has it. And it is on this basis that those who care about the sport and about the man plead for his retirement and, failing that, revocation of his boxing license.

They forget that the world is full of cops and surgeons and airline pilots who don’t have it anymore, and football players and teachers and psychiatrists and boxing writers. Few of us have it anymore. Those who do will lose it soon enough. And after they do, they’ll want to keep going to work every day, too, if not to try to regain it, then at the least to keep from vanishing altogether.

Holyfield won’t ever reach the top of his profession again, but, then, few of us will either. We know it. It doesn’t mean we stop going to work. We have bills to pay, identities to cling to. So we keep at it. So too will Holyfield. Assuming he gets by Williams, he will meet come-backing Brian Nielsen in Denmark in March.

“I’m taking it fight by fight, but all these fights are to show myself that I will be ready because you don’t get any better if you don’t participate,” Holyfield said. “I have to continue until I get an opportunity to fight another champion.”

Mauricio Herrera’s upset of Ruslan Provodnikov in the season opener of ESPN2’s Friday Night Fights reinforced an age-old handicapping axiom: Never bet on the guy who comes into the ring with a black eye. ÔÇª

My initial reaction to the new FNF segment “MMA Minute” was one of outrage and revulsion. What the hell were they doing forcing this on us? Then it occurred to me that if it draws some MMA fans to the Friday Night Fights, which I imagine is the point, well, what the hell. ÔÇª

The bad news: For a guy who won’t let Alexander Povetkin fight anyone within driving distance of the Top 10, Teddy Atlas sure complains a lot about the level of Demetrius Andrade’s competition. The good news: Atlas is still the only guy in broadcasting who will tell you when the fight you’re about to watch is crap. ÔÇª

I have nothing against a Bernard Hopkins-Jean Pascal rematch per se, but we all can name about 100 decisions that were worse than that draw and nobody gave a damn, much less ordered a rematch. What makes this one so special? ÔÇª

Surprised to hear Andre Berto is in talks to meet the winner of the Mike Jones-Jesus Soto Karass rematch. Jones should win the return but he’s not ready for Berto, who’s maybe the best fighter in the world without a big name on his record. ÔÇª

What a shock: David Haye won’t be fighting Wladimir Klitschko. I haven’t been this surprised since Bob Arum decided Julio Cesar Chavez Jr. wouldn’t be fighting Miguel Cotto after all.