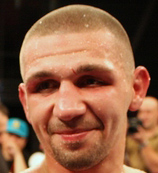 ANAHEIM, Calif. — Junior middleweight fringe contender Pawell Wolak stopped Mexican prospect Jose Pinzon in the seventh round of a scheduled 10-round middleweight bout on the undercard of the Nonito Donaire-Wladimir Sidorenko fight on Saturday.

Wolak (28-1, 17 knockouts), who was scheduled to fight Julio Cesar Chavez Jr. in the main event before the son of the Mexican legend withdrew due to illness, got up from a second-round knockdown and smothered Pinzon (19-2-1, 13 KOs) with relentless pressure in every round until he overwhelmed the young man from the Yucatan with body shots, hooks and several hard right crosses.

Referee Jack Reiss waved the bout off at 2:24 of the seventh round after a weary looking Pinzon had his head snapped back by one too many right hands.

The hard-fought victory was Wolak's seventh consecutive win since the New Jersey-based Pole dropped a 10-round decision to Ishe Smith in 2008.