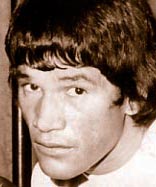 Sergio Martinez blanched when someone compared him to countryman and fellow middleweight champion Carlos Monzon recently. The current champ, who fights Paul Williams on Saturday, took it as a compliment but wanted to make something clear.

“Carlos Monzon,” he said through a translator, “is at a different level.”

Amen. Monzon is the greatest fighter ever produced in Argentina and one of the greatest middleweights of all time, perhaps second only to the great Sugar Ray Robinson.

Monzon also is one of boxing’s most-tragic stories: A poor child grows up to be the toast of the boxing world only to end up in prison for murder and then dead as the result of a car accident.

But 40 years after his greatest triumph — the day he stopped Nino Benvenuti to win the title on Nov. 7, 1970 — his legend lives.

Monzon was typical of many fighters, born into a dirt-poor family in a forbidding neighborhood. His God-forsaken town was San Javier, in the province of Santa Fe, north of Buenos Aires. And, like so many future champions, he took up boxing at a young age and used it as a way out of his dire circumstances. He turned pro in 1963, at 20, and compiled a record of 16-3 in his first 19 fights.

Monzon (87-3-9, 59 knockouts) would never lose again, one of the greatest streaks in the history of boxing.

Dub Huntley, the trainer of Daniel Ponce de Leon and others, traveled to Buenos Aires in August 1968 to fight the then-rising contender. Huntley, stopped in four rounds, remembers his impressions of the future champion vividly.

Monzon was known in Argentina by 1970 as a tough, accomplished boxer with legitimate title hopes but, according to Irusta, he was hardly a superstar.

Until he faced Benvenuti that year in Rome. Monzon dominated the Italian playboy before stopping him in the 12th round of RING’s Fight of the Year to become the 160-pound champion as his countrymen gathered around televisions back home in Argentina.

He became a star overnight, a dashing figure who would hold his title until he retired in 1977 and become an enormous cultural figure in his country and beyond.

Monzon traveled in social circles he could never have imagined as a child, partying with movie stars in Paris and the upper crust back in Buenos Aires. He acted in movies and became a regular guest on television. His romance with glamorous Argentine actress Susana Gimenez captivated the masses.

And he was rich. He drove the most-expensive cars and dressed in fine suits, giving him a look that fit his new-found status.

“When I became champion I was 28,” Monzon said, according to Nigel Collins’ fascinating book Boxing Babylon. “I was not a boy. It was a big change for me because I started to get big money. I could buy the biggest car. I learned to take care of my clothes.

“To become middleweight champion of the world is very important in any part of the globe, including my country. I know Argentinians were proud of me.”

That they were. Irusta said Monzon’s fights, whether overseas or in Argentina, were huge events among his countrymen after he beat Benvenuti. Everything stopped for the duration of the action regardless of the time of day.

And he never disappointed his fans in the ring, beating the likes of Benvenuti (again), Bennie Briscoe, Emile Griffith (twice), Jose Napoles and Rodrigo Valdez (twice) before calling it quits when he was convinced he was beginning to decline at 35.

Outside the ring was a different story.

Monzon’s life changed radically because of his success in boxing but he retained elements of his difficult youth, including an inner rage and a tendency toward violence.

His temper often got the better of him. He was known to be physically abusive to women. He did some jail time early in his career after a brawl. And he was shot twice — in the arm and shoulder blade — by his equally ill-tempered wife in 1973 but recovered to continue fighting.

However, two lives were destroyed by an incident that took place in 1988.

Monzon and his supposedly estranged second wife, Alicia Muniz, with whom he had a stormy but passionate relationship, were together in a second-story apartment in the beach resort of Mar del Plata in Argentina when they apparently began to fight.

The details will always be disputed but one thing is certain: Muniz ended up falling from the balcony and was found dead. Monzon was arrested, setting off an O.J. Simpson-like trial and media frenzy that had Argentina riveted.

Irusta remembers his countrymen glued to their televisions and radios during trial, devouring every bit of information available, as they once were glued to their TVs when he fought.

Monzon maintained his innocence but an autopsy indicated that Muniz had been strangled before she went over the balcony. He was convicted of murder and sentenced to 11 years in prison.

The hero of Argentina had become an inmate.

The former champ continued to maintain his innocence in spite of his comments about his temper, even recalling to Irusta happy days he spent with Alicia, and often asked to see the son they had together, Maximiliano.

“He was another man,” Irusta said. “When he was champion, he was like a king or a lion. He used to walk in a way that made him look important. In jail, he was nothing. The man who used to give orders to people was now a man who said, ‘Yes sir, yes sir.’

And it became even sadder.

Monzon, due to be released soon, was driving back to prison after a weekend furlough when he drove off a road and his car overturned not far from his home in Santa Fe. Monzon, 52, and a passenger were killed.

So ended the life of one of Argentina’s greatest sports and cultural figures, lying on the side of a road “looking up at the Santa Fe sky,” as Irusta put it.

Memories of him are complicated. Those from Santa Fe, obviously forgiving, remember him as a local hero who conquered the boxing world. Irusta said his people chanted his name at his funeral. Those from Buenos Aires, the capital, remember a great fighter but one who took the life of an innocent young woman.

“Many people won’t pardon him,” Irusta said. “It’s a very difficult, sad story. I suppose that night he was drunk or under the affects of drugs. He lost his mind. And I suppose he used to love Alicia Muniz.”

“Many years have passed now. There has never another champion like Monzon. He’s the No. 1 boxing champion in our history. I think now that’s what people want to remember. I think there are other things they want to forget.”