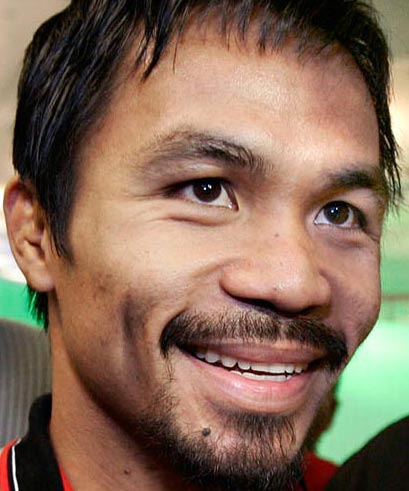 Manny Pacquiao turned a three-time world titleholder who outweighed him by 17 pounds when they entered the ring into a pathetic punching bag, easily outpointing Antonio Margarito on Saturday before 41,734 at Cowboys Stadium.

Margarito (38-7, 27 KOs) never had a chance. Pacquiao, about six inches shorter than his foe, was just what most observers expected him to be: too fast and too good for a tough, but plodding brawler.

Pacquiao landed two-, three-, four-punch combinations apparently at will and used his feet to move before Margarito could react. He could've fought this way the entire fight and won every second of every round, or so it seemed.

He chose not to, though. He purposely put himself in danger a number of times, both fighting inside and with his back against the ropes.

And even there, while Margarito was able to land punches here and there, Pacquiao scored much more consistently. Pacquiao was never, ever in significant danger.

It was clear by the eighth round that Margarito, his right eye shut and left badly swollen, had no chance to win.

To his credit, he kept coming forward, kept throwing punches. He paid a price, though, as Pacquaio's continued to pound his raw flesh and he could do nothing about it.

Even those angry at Margarito over the hand-wrap scandal, in which he was caught with illegal pads in his wraps before he fought Shane Mosley, had to feel sorry for him.

Pacquiao showed class in the 12th around, when he eased up rather than try for the knockout. Clearly, he wasn't comfortable hurting Margarito any more.

Knockout or no, this was another masterpiece, an awesome display of boxing that further enhances the legacy of the greatest fighter of his era.

In the end, the distractions in the Philippines and the size difference amounted to nothing. A great fighters whipped a good one.