Allen Green: Put up or shut up 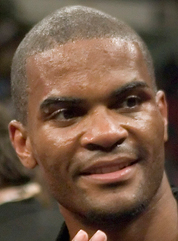 To look at Allan Green outside the ring and to hear him talk you’d think he’s the best thing to happen since Joe Louis. He has the look and swagger of an Alpha male and a cocky charm that only the most self-assured and predatory can pull off. If you didn’t know any better, you’d believe every word he said.

This is what he said before his fight with Andre Ward last June, which he lost by three scores of 120-108:

“I’ll fight him at his church. I’ll fight him behind K-Mart. That’s no disrespect to Andre. That’s me telling you how bad I want this fight. I know for a fact I’ll blow him out of the water. His whole game, whole style of fighting, I know everything about itÔÇª There is no one in the (Super Six) tournament can beat me, nobody.”

On its own, there’s nothing wrong with losing to Ward. Ward is a good fighter. And very often fighters don’t know what they’re getting themselves into with a guy until the bell rings and they walk out to the center of the ring and everything goes to hell.

“I feel great, I feel like a monster and March 3rd the world is going to see a monster. … You know people seem to forget I am a power puncher, and I promise you that he doesn’t hit harder than I do. ÔÇª When you have a nuclear missile coming at your ass at 10,000 miles per hour, then that’s a different story. That’s when you’re talking about Allan Green.”

Green blamed his listless performance on a medical condition that later resulted in surgery to remove a large portion of his colon (and perhaps one of Miranda’s shoes).

Green (29-2, 20 knockouts) gets another shot when he meets veteran Glen Johnson on Nov. 6 in Las Vegas in Group Stage Three of Showtime’s Super Six World Boxing Classic. Johnson, as you surely know by now, is filling in for Mikkel Kessler, who dropped out of the tournament with an injured eye. Or something.

During a recent conference call, I asked Green whether he felt any added pressure to perform well against Johnson because of the awful nature of his performance against Ward.

In case you’re wondering, the right answer here is, “Yes!” That this was not Green’s response was telling.

I asked Green whether he understood why fans and members of the media doubt his ability to get past the level at which he currently finds himself, seeing as how he lost each time he has moved up.

“Of course I can understand that. It only makes sense,” he said. “I had my big opportunity, and my performance was sub-par, so I can completely understand that.” Good for him.

He elaborated on the nature of his weight problems before the Ward fight.

“After the Ward fight got postponed because of (Ward’s) knee injury, I kind of fell into a funk and got real depressed and started eating a lot and not really training,” he said. “I just started blowing up because I didn’t think that fight would happen.

“So I had to play catch up when I came into camp. I think I ended up having to lose 28 pounds in three weeks. I don’t know how I did it. But this time, I stuck to my diet – I’m a vegetarian – I stuck to my diet, ate the right things. This time when I wake up in the morning, I weigh around 176 pounds.”

If Green is in anything other than superb condition, Johnson (50-14-2, 34 KOs) will go right through him. Though 41 years old, Johnson gave 28-year-old light heavyweight belt holder Tavoris Cloud all he wanted for 12 brain-rattling rounds in August. He does not expect to have trouble getting down to the 168-pound weight limit.

“I immediately started doing what I need to do to get down to the weight,” Johnson said. “I haven’t done 168 pounds in like 10 years, so I just have to commit myself and go to work. This is what I do. This is my job, this is how I get paid. This is how I eat. That’s how I look at it. I just went about my business to take care of my job.”

It might be worth noting that Green isn’t telling us all how great he’ll be against Johnson. There is no bravado this time around. That might be because the fighters are friendly and have sparred in the past, sessions about which Green admitted, “I learned a lot from Glen. A lot of days he gave me the business, a lot of days he just put it on me.”

Or it might be because he realizes that he’s used up his boasts, that he’s down to his last chance and has to prove himself. Not with his mouth or his swagger or with his charm. With his fists.

It’s really hard not to root for Johnson, not just against Green, but against anyone. He seems to be an awfully nice guy. But then, he’s not trying to punch my brain stem loose. ÔÇª

Not only is Andre Ward-Sakio Bika a better fight than Ward-Andre Dirrell, Bika is a greater threat to Ward. Those who underestimate Bika do so at their peril. He will be in Ward’s face for 12 rounds. And if he knocks him down, lock up the women and children. It’ll get ugly. ÔÇª

If you’ve been waiting forever, as I have, for HBO to put out a bad 24/7 episode, keep waiting. The debut episode of Pacquiao-Margarito 24/7 is as strong as any they’ve done. ÔÇª

When he was an active pro fighter in his 20s, Freddie Roach was no physical specimen. He’s now 50 years old, has Parkinson’s disease and has sprouted biceps that would put

Cristiana “Cyborg” Santos
to shame. What the hell? ÔÇª

In case you missed it, Main Events has dialed back Tomasz Adamek’s ambitions a bit. Adamek will sell out Newark’s Prudential Center against journeyman Vinny Maddalone on Dec. 9.

You have to feel sorry for Maddalone. He would have been a perfect addition to the cast of “Jersey Shore” or one of the other ubiquitous New Jersey, Guido-themed reality shows currently in vogue, but it’s too late now. Those train-wrecks require their stars to be able to string together a couple single-syllable words every now and then. And by the time Adamek is done with him, Vinny might be out of the talking business altogether. ÔÇª

Kudos to Michael Katsidis for going through with his challenge of Juan Manuel Marquez after the unexpected death of his brother. That’s what he should do; there’s a long history of underdogs pulling off the upset after a significant personal loss (see Douglas KO 10 Tyson). Andre Berto blew the opportunity of a lifetime when he withdrew from his fight with Shane Mosley because of the earthquake in Haiti. ÔÇª

What a shock: Bob Arum visited Pacquiao’s training camp and pronounced himself “concerned.” Sure, concerned that if he doesn’t manufacture some doubt around Pacquiao’s conditioning, he might not get the PPV numbers he’s hoping for. Really, I understand the need to create some drama, but is it really worth giving the Philippines a national anxiety attack? ÔÇª

Good news: Shannon Briggs’ response when asked why he wouldn’t let his corner stop his fight against Vitali Klitschko: “My wife was there, and you don’t quit in front of your wife.” Good for him.

Bad News: Briggs assured his fans he’ll be back as soon as his biceps heals. Just in case any of them were worried they’d never get to see him half-ass his way through a big fight ever again. …

Just a couple more weeks until we start getting more big fights than we know what to do with, folks. Thanks for hanging in there.

Bill Dettloff, THE RING magazine’s Senior Writer, is the co-author, along with Joe Frazier, of “Box Like the Pros.” He is currently working on a biography of Ezzard Charles. Bill can be contacted at [email protected]