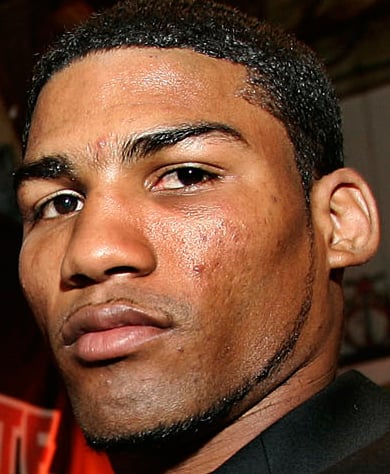 Older guys know they are up against it in a prizefight. Their reflexes aren’t worth a damn anymore, their joints are on fire, and unless they are pathologically angry, that well of resolute rage that propelled them through so much of their youth has run dry, finally.

And now they think about self preservation and the future, which no prizefighter should ever think about.

A lot of them stay in the ring anyway, because it takes nearly a lifetime to get really good at something and to build an identity around it.

Then that day comes when a guy in a suit or with a stethoscope hanging around his neck and no scarring around his knuckles or eyes tells you you can’t do it anymore. You can’t be that man anymore.

In September, CES Promotions announced that Ray Oliveira, a career junior welterweight who hadn’t fought in five years and is 41 years old, was going to face tough club fighter Joey Spina at 168 pounds.

Oliveira always was a popular TV fighter because he worked hard and threw a ton of punches and made for good fights. Also, he couldn’t beat the best guys. And if there’s anything a fight fan loves, it’s a guy who’s just not good enough but either hasn’t figured it out yet or doesn’t give a damn.

Still, no one was happy about the comeback. Not the fans, certainly not the boxing media, who have never seen a comeback they didn’t deride, and not Oliveira’s loved ones.

Still, things were on schedule. Oliveira dropped 20 pounds from his middle-aged physique, and, according to Peter Manfredo Sr., his trainer, was in excellent condition.

“The guy was in shape,” Manfredo told RingTV.com. “And he was doing the necessary things in the gym to beat this guy. When he first came in, everyone was saying, ‘Why is he doing this? He’s gonna get killed.’ But after three or four weeks guys, they were saying, ‘He’s gonna win this fight.'”

And it wasn’t as though Manfredo had Oliveira working with neophytes.

“I had him sparring with (undefeated prospect) Edwin Rodriguez and Peter Jr.,” he said, “and you seen what Junior did to Spina. (Manfredo Jr. stopped Spina in three rounds in 2006). I had him working with guys like that, and they weren’t holding back on him, and he was doin’ fine.”

Three weeks before the fight, which was scheduled for Oct. 2, Oliveira saw Dr. Michael Moore, a neurologist in Concord, Mass., for a full neurological work-up in accordance with the requirements of the local boxing commission. Moore, who has been in practice for 48 years, noted some slight abnormality with respect to Oliveira’s spinal cord, but pronounced him fit to fight.

On the Wednesday before the fight, Oliveira was notified by the Mashantucket Pequot Tribal Nation Gaming Commission, under whose auspices the Spina fight would take place at The Foxwoods, that Dr. Michael Schwartz, their chief ringside physician, wanted him to see their neurologist.

(It is fairly unusual that a chief ringside physician would ask for a second opinion, but it’s not unheard of; indeed, the Web site of the American Association of Professional Ringside Physicians, of which Dr. Schwartz is chief, states clearly that the athletic commission may require any additional tests it deems necessary. In the case of a 41-year-old man who hasn’t fought in five years, a mandated second opinion does not strike one as unreasonable.)

Oliveira told the commission he had already seen a neurologist who passed him. It didn’t matter, and Oliveira made an appointment with Dr. Robert Cantu, considered one of the nation’s top sports concussion specialists and the neurologist who in 2006 supported Joe Mesi’s re-licensing and in fact worked Mesi’s corner as a cutman in his comeback fight against Ronald Bellamy.

Oliveira arrived at Cantu’s office, paid the $500 fee — out of his own pocket — and was shocked at what happened next.

“He did every test my doctor did,” Oliveira said. “I passed them, and then at the end of the conversation he looked at me and says, ‘You’re good. You did well. But it’s too risky, so I’m not going to allow you to fight.'”

“Too risky? Every fighter in that ring is at risk,” Oliveira said a few days after Spina stopped his replacement, Antwun Echols, in three rounds, which was maybe the most painful irony of all: Echols has now lost nine of his last dozen fights, five by knockout. It’s hard to imagine one couldn’t find a reason to pull him out of a fight if one were so inclined.

“Risk? That’s what we take in that ring, is risk,” Oliveira said.

Jimmy Burchfield, the fight’s promoter, said he felt terrible for Oliveira because he’d trained very hard and had done everything that was asked of him.

“Ray was in unbelievable shape and would have put a hell of a fight on,” Burchfield said.

Regarding Oliveira’s status, he said, “I’m never gonna put a fighter in the ring who’s been told it’ll endanger his life to be in there. I wouldn’t even consider it. On the other token, if a fighter has done all his due diligence and he wants to fight, and he can be 41, or 44, or 38, if he’s done everything he’s supposed to, it’s hard to tell him he can’t.”

Certainly many will read this story and be happy that Oliveira was pulled from the fight, that the opinion of one physician was seen as more valid than the opinion of another — which is what all of this boils down to in the end.

It might also be that the “safer,” more conservative opinion, the one that would put the Foxwoods and local commission at less risk would have prevailed no matter what.

But there is this to consider too: Most fighters can’t put the game behind them until they’ve been convinced they’re really through. That convincing comes in the form of a bad beating from an inferior guy. That ends things for them. It closes the loop. It allows them to put boxing behind them and move on with the rest of their lives.

And that can lead to that most precious commodity of all: Peace of mind.

It is likely Spina would have given Oliveira that gift. History is full of stories in which better fighters than Oliveira lost to worse guys than Spina simply because they weren’t any good at fighting anymore.

“At least he’d have some closure,” Burchfield said, when I asked him whether it would have been better if Oliveira had fought to Spina and lost badly.

“Ray came up the hard way and put a lot into boxing. At least if he had (the fight and lost) he would know he can’t fight anymore.”

That knowledge is liberating to an old fighter in a way that no one who is not a fighter can be expected to understand. It moves him forward. Maybe he starts working on a new identity. Becomes a new man.

But this way? Believing you can still fight but not getting the opportunity to prove or disprove it, if to no one but yourself? Moving ahead then is a much trickier business.

Here’s to hoping Ray Oliveira can figure it out.

Showtime executive Ken Hershman said the tourney will go on regardless, with Betty White, Carrot Top and Audley Harrison stepping in to replace the injured fighters, who we will keep in our prayers. ÔÇª

Mike Arnaoutis, who Danny Garcia stopped Friday night in Philadelphia, has now dropped four straight. What the hell happened to this guy? ÔÇª

I received several emails from listeners upset with me for predicting during the most recent episode of Ring Theory that when he gets old Omar Sheika will be in an assisted-living facility and that his upcoming fight with Adrian Diaconu will bring him one step closer to eating creamed rice three times a day.

Let me set the record straight: I never said it would be when he’s old. ÔÇª

Various sources are reporting that Timothy Bradley-Devon Alexander is a done deal, which can only signal forthcoming reports to the contrary. ÔÇª

Somebody quoted James Toney recently complaining that the Klitschkos are still ducking him. What do you think the color of the sky is in James’ world? ÔÇª

Robert Garcia, who’s training Antonio Margarito for his fight with Manny Pacquiao, was quoted recently saying Pacquiao is “very beatable.” That’s true — if you’re a lion, or a giant, man-eating squid, or a zombie. A boxer between 135 and 150 pounds? Not so much. ÔÇª

Reports out of Australia claim “mobsters” were behind Paul Briggs’ apparent quit job against Danny Green in July. Thank goodness. I thought for sure it was PETA, or maybe Mothers Against Drunk Driving.