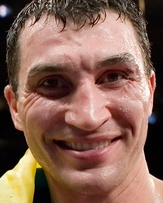 TALENT: The fighter we’re seeing now is actually the third version of Klitschko. He was a punishing knockout artist when he made his pro debut after winning a gold medal at the 1996 Olympics. Then, from 2003-2005, he was the fragile Klitschko who had trouble staying on his feet. Now, as Wlad 3.0, he is an overly cautious, sometimes dull fighter who controls fights with a long, probing jab. His left hook and straight right are excellent, and at 6 feet, 6¾ inches (199cm) and around 245 pounds (111kg), he is an imposing, statuesque heavyweight. Still, what has kept him undefeated since 2004 is his unwavering concentration. Grade: A-

ACHIEVEMENT: Klitschko has fought twice this year, brutally stopping Eddie Chambers in the 12th round in March and then doing the same in his rematch with Sam Peter in the 10th round on Sept. 11. The latter victory was his 14th successful title defense spread out over two reigns and the second defense of THE RING championship. Not bad for a guy who started out beating the likes of “Wimpy” Halstead, and “Bigfoot” Martin. Klitschko victims include Chris Byrd (twice), Francois Botha, and Hasim Rahman. Klitschko also gave a number of undefeated heavyweights their first losses, including Peter, Calvin Brock, Eliseo Castillo, Ruslan Chagaev, and, in one of the all-time worst stinkers, Sultan Ibragimov. You could say he hasn’t beaten any great fighters, but your argument would be stronger if you could actually name a great heavyweight since the retirement of Lennox Lewis. Grade: A-

MARKETABILITY: Klitschko is a Caucasian with charisma and a knockout percentage that would impress Ernie Shavers, but he can’t barely get a fight on American TV. The moronic statement by HBO president Ross Greenburg regarding viewers not being able to discern between Wladimir and his brother Vitali as the reason for Wladimir not securing HBO dates shows how little Wladimir means in this country. Had Greenburg said the same thing about the Marquez brothers, he’d be labeled a bigot. Apparently, though, fighters from the Ukraine are safe targets. Fortunately, the German public treats Klitschko like a superstar. Grade: A+ (in Europe), C- (in USA)

SUPPORT SYSTEM: Bernd Boente and Shelly Finkel have worked as Klitschko’s business advisors, while Klitschko’s promotional group is K2 Promotions. They seem competent, but a couple of huge international bouts – Klitschko vs. Oleg Maskaev, and Klitschko vs Nikolay Valuev – fell through the cracks. Rather than try to figure out who is at fault, let’s focus on the strong work of trainer Emanuel Steward, who began working with Klitschko when “Dr. Steel Hammer” was beginning to look like a chinless wonder. Steward’s resurrection of Klitschko may go down as one of the great reclamation projects in boxing history. On the personal front, Klitschko is dating gorgeous actress Hayden Panettiere, which means not everyone saw the Ibragimov fight. Grade: A

GROWTH POTENTIAL: Klitschkok has Dec. 11 reserved for a fight against a yet to be determined opponent who he will undoubtedly will pummel. Let’s hope a bout with David Haye happens eventually. Grade: B