Alvarez takes another step toward stardom 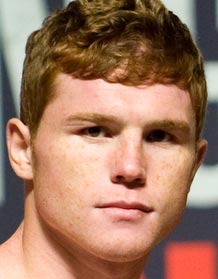 LOS ANGELES — Victor Ortiz scored an impressive knockout of Vivian Harris, putting the veteran down four times in less than three rounds, on Saturday at Staples Center. Daniel Ponce de Leon looked positively scary in his KO of Antonio Escalante. And Shane Mosley’s listless performance in his draw with Sergio Mora was further evidence that he is in decline.

Saul “Canelo” Alvarez was the talk of this card, though.

Alvarez (34-0-1, 26 knockouts) was nothing short of sensational, becoming the first to knock out Carlos Baldomir since very early in the Argentine's career as 13,591 mostly Mexican and Mexican-American fans roared their approval.

And it wasn’t just the result, which wasn’t terribly surprising given Baldomir’s age (39) and the fact he has lost whatever hand speed he once had. It was how Alvarez did it.

The 20-year-old from Guadalajara demonstrated maturity beyond his years, patiently outboxing a clever, awkward opponent with far more experience than he has. He displayed a world-class jab to set up powerful, well-timed rights.

Baldomir (45-13-6, 14 KOs), reputed to have one of the best chins in boxing, took many of Alvarez’s best shots early in the fight but gradually broke down as his baby-faced foe landed more and more telling blows.

Then Alvarez gave the crowd exactly what it wanted – a thrilling finish in the third round. He landed one hellacious shot ÔÇª then another ÔÇª then another and Baldomir started to wilt. Finally, a straight left put the Argentine on his face and ended the fight two seconds before the end of the round as the crowd erupted.

“I’m very happy, I’m full of emotions to be the first to knock out Baldomir in a big fight,” he said through a translator.

Again, we shouldn’t read too much into a victory over a faded opponent who was never particularly good to begin with. Baldomir was a good test, though, a tough, veteran fighter who was desperately trying to hang on as a contender. And he aced the test.

Of course, he must continue to win. And one person with considerable knowledge of boxing is fairly certain he will.

“He hits really hard,” Baldomir said through a translator. “I was surprised by his power. No one has hit me like he did. He’s definitely going to be a real champion. He’s the real deal.”