The best of all time A to Z: Olivares 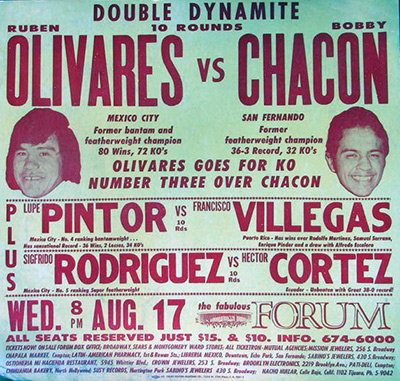 This is the 15th in a 26-part series in which RingTV.com endeavors to name the best boxers of all time based on last name – A to Z. We’ll post one letter each day for 26 days. Our criteria in making the selections were fairly simple: Accomplishments in the ring, with heavy emphasis on strength of opposition, as well as impact on the sport. This wasn’t easy, as our first installment — the letter “A” (Armstrong vs. Ali) — demonstrates. However, we’re confident that our choices are arguably the best. We also are including five more fighters for each letter to indicate others that were considered. Also, noted author and boxing historian Bert Sugar — who provided input — tells us where he ranks our choices among the greatest fighters pound-for-pound and gives us a thought on each selection. And, finally, we’d love to get your thoughts on the project. Here goes … today’s letter: “O.”

O: RUBEN OLIVARES
Lifespan: 1947-
Hometown: Mexico City
Record: 88-13-3 (77 KOs)
Active: 1965-81; ’86-88
Weight class: Flyweight through junior lightweight
Titles: Bantamweight, featherweight
Sugar’s ranking: No. 36
The thought process: Olivares still receives an enthusiastic reception from Mexican fans and other admirers whenever he’s introduced before big fights in Southern California. And it’s no wonder. Julio Cesar Chavez might’ve been the best fighter ever from their country but no one, not even the great Chavez, provided more thrills than Olivares. Fans of all nationalities love frenetic action and dramatic knockouts; El Puas gave them both on a regular basis and always handled himself with class outside the ring. Olivares was one of the most-powerful punchers in history, particularly a lethal left hook; he ranked No. 12 on THE RING’s all-time list of greatest punchers. But he also was a complete fighter with an extensive amateur background. He started his career with 23 consecutive knockouts and then a record of 60-0-1 (54 KOs) before losing for the first time to rival Chucho Castillo on a cut in the second of their three fights. He once also had a 21-KO streak in the middle of his career. Olivares won the bantamweight title in 1969 when he stopped Lionel Rose in five rounds at the Forum in Inglewood, Calif., where he fought 22 times and developed a passionate following. He would go on to win four titles in all in two divisions and claim victories over the likes of Castillo, Bobby Chacon, Jesus Pimentel and Jose Luis Ramirez before he was finished. In the end, he was left with one of the most-impressive knockout ratios in history and legions of grateful fans because they never felt cheated after his fights. For the record: “O” was a difficult decision. Carlos Ortiz, a five-time titleholder in two weight classes, and Manuel Ortiz, who successfully defended his bantamweight title a total of 19 times over two reigns, are also worthy of the No. 1 spot.

Sugar quote: “Look at his number of knockouts. He was a dual champion. He was never in an unexciting fight. He had a left hook from hell. Everything about him said ‘great fighter.'”