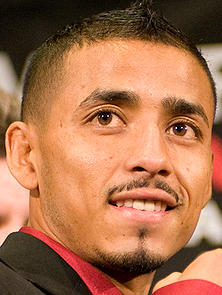 Segura unified the two of the 108-pound titles and handed Calderon, considered one of the best boxers in the world, his first loss with a body shot that ended the fight at 1:34 of the eighth.

Calderon (34-1-1, 6 knockouts) had gone nine years as a professional without tasting defeat.

Segura (25-1-1, 21 KOs) is a latecomer to boxing who has relied more on his punching power and fighting spirit than technique to build a successful career.

The resident of Bell Gardens, Calif., has now won five fights in a row after his only loss, a decision to Cesar Canchila in 2008 that he avenged with a fourth-round KO the following year.