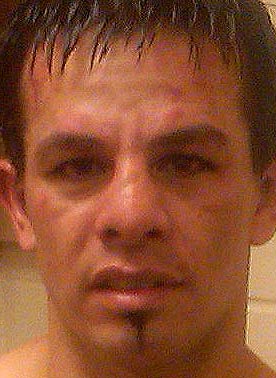 It’s a sure bet that none of the 11,000 or so fans crammed into the Prudential Center in Newark, N.J., on Saturday night were there to see Lenin Arroyo, a club fighter from Costa Rica now living in Miami.

Arroyo, or “Volcano,” as it read across the front of his waistband, was hired by the event’s promoters more or less to become the ninth pro fighter to lose to Sadam Ali, the prodigiously talented welterweight who in 2008 became the first “Arab-American” to represent the United States at the Olympic box-offs. This is very important to people who follow such things.

Arroyo entered the ring wearing powder-blue trunks with fringes on the sides. The fringes looked worn down and a little faded, which would seem to defeat the whole point of fringes. Across the back of his white T-shirt there was an advertisement for a factory or some such: “We don’t use machines. We build them.”

Across the back of his waistband read the name, “Celeste.” He told me later Celeste is his daughter. She’s 9 years old and lives in Costa Rica.

Ali’s shirt was an over-sized, multi-colored construct of some expensive-looking material that could only have been fashioned by a talented and exclusive tailor. In another setting you might call it a cape. Across the back: “World Kid Ali.”

Against this backdrop Arroyo did his job against Ali, taking a knee in the fifth round and rising just after referee Steve Smoger’s count reached its conclusion. Ten seconds earlier Ali had landed a perfect left hook to Arroyo’s liver and not even volcanoes can withstand so precisely landed a blow.

A few moments before the end, an overly talkative man connected somehow to the promotion and seated next to me said to someone — possibly me, but as a matter of self-preservation I had ceased paying close attention long before — that Arroyo “is like a Gatti. He even looks a little like Gatti.”

This gentlemen spent much of the evening sharing mostly preposterous observations punctuated with “there’s no doubt about it.” He openly rooted for and cheered on Tomasz Adamek in the main event, trampling on the most-sacred press row commandment. Through much of the fight he called Adamek “Adam.” After a while, he realized his error and switched to “Tommy.”

Nevertheless, I mentally ceded his point about Arroyo and the late Arturo Gatti. Though light years more talented and successful, Gatti at his most desperate moments did the only thing he could to lessen the talent gap between him and his opponent: put his head down, charge in and hope for the best. You never got the sense it embarrassed him, or that he wished he could do more. He just did it.

Arroyo didn’t do even this as well as Gatti, and what’s more has no big punch on which to pin his meager hopes, as Gatti did. But he had the same kind of fearless resignation about him as he charged into Ali, winging overhand rights and left hooks that had roughly the same chance of landing as they would have if had I been throwing them from my position roughly 20 feet from the ring.

Arroyo (20-13-1 with four knockouts) kept at it all the same, never looking discouraged, egging Ali on, taking flush on the jaw and face every kind of punch there is to take. A long right staggered him in the first and it never got better, especially when he turned southpaw for a moment in the fourth round and was quickly blasted for his effort.

The crowd, clearly on Ali’s side, chanted, “Ali! Ali!” One can safely guess that none of them had been born yet when that chant first became fashionable.

Ali enjoyed it nonetheless, grinning at Arroyo’s creeping ineptitude while bombarding him at will. Arroyo, for his earnestness, could land nothing.

Later he acknowledged Ali is “class A” fighter and much better than Jones, whom he called “lazy.” His face was a lumpy connection of angry red bumps, as if he’d been attacked by an entire colony of Africanized bees.

He added, “These guys are too big for me. I have to be a real lightweight. I can’t get a big fight at 135, so I have to fight bigger and bigger guys.”

Arroyo’s trainer, Richard Acosta, chimed in. “He should be fighting at 135 or 140 but he can’t get fights in those weight classes. He doesn’t have a big promoter so he has to fight these guys.”

“Fighting these guys is more money,” Arroyo said. “They don’t want fight someone with a good record so they fight me.”

Arroyo said that when he is not fighting he is a personal trainer in Miami, and that he plans on just two more fights before he quits the game.

“Just one or two more fights and that’s it.”

He knows as we all do that there never are enough tough guys willing to charge into a bigger fighter and slug away, especially if he’s firing mostly blanks.

You can always find guys to fall down. They’re all over the place. The ones who go down fighting are harder to find. Arroyo goes down fighting. That will keep his phone ringing for as long as he cares to keep picking it up.

For my money the most entertaining fight on the Adamek-Michael Grant card was Joel Julio’s hard-fought distance win over Philadelphia’s tough, well-schooled Jamaal Davis, who is far better than his 12-7 (6 knockouts) record suggests. ÔÇª

Outside Poland, there’s not a better place for Adamek to fight than The Prudential Center in Newark. Remember how it was with Gatti and Boardwalk Hall? That’s how it is. Adamek shouldn’t fight anywhere else. ÔÇª

Look for a in-depth feature on Grant and his fall from “heir apparent” to heavyweight nonentity in an upcoming issue of THE RING. ÔÇª

Prediction: Many fight writers will correctly report that Grant’s size advantage was of little use to him against the quicker, more agile Adamek. Those same writers, next time they handicap a fight, will out of habit pick the bigger guy. ÔÇª

Yeah. Why not Pacquiao-Marquez III?. ÔÇª

Count on Texas giving Antonio Margarito a license to box. They have very low standards. For example, I heard they gave a really important job to a guy named “Dickie.” ÔÇª

Between Grant and Chad Dawson losing, Eddie Mustafa Muhammad is having a bad stretch. Thank goodness for Zab Judah. Wait. Is it possible to use those five words together in a sentence like that? ÔÇª

Did you hear? The WBC wants Andre Berto to fight your garbage man’s niece’s prom date or they’re going to strip him. Keep paying those sanctioning fees, guys. How’s that working our for you? ÔÇª

If you’re in the business of housing dementia patients, employing home-duty nurses or selling foods that have been creamed, put into little jars and sold by the gross, then maybe the comeback of 36-year-old Vassiliy Jirov is good news. To the rest of us, not so much. ÔÇª

So Macro Huck rolled over Matt Godfrey. Great. More proof that if there’s anything more useless than a cruiserweight, it’s an American cruiserweight. ÔÇª

I thought my eyes were deceiving me when I read that former Contender contestant Jimmy Lange won a fight. Then I saw it was against 12-40-2 (4 KOs) Mike McFail, possibly the most appropriately named fighter in the entire history of prizefighting. ÔÇª

Hey did you hear? BJ Flores is a free agent! Here’s a list of all the promoters clamoring to sign him:

Bill Dettloff, THE RING magazine’s Senior Writer, is the co-author, along with Joe Frazier, of “Box Like the Pros.” He is currently working on a biography of Ezzard Charles. Bill can be contacted at [email protected]