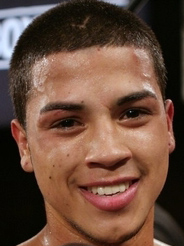 CHRIS AVALOS vs. CHRISTOPHER MARTIN
Rounds / weight class: 10 / bantamweights
Location: Hinckley, Minn.
Television: Showtime
The backdrop: Avalos (16-0, 13 knockouts), a 20-year-old boxer-puncher from Lancaster, Calif., is already building up Prospect of the Year-level hype from some members of the boxing media. And why not? The kid is whacking out everyone he faces. His fourth-round KO of Jose Nieves in January was especially impressive given the seasoned Puerto Rican pro had never been stopped. Martin (18-0-2, 5 KOs) is a popular 24-year-old prospect from San Diego who stopped undefeated Mexican boxer Eduardo Arcos (15-0) after seven rounds to earn the California State 122-pound title last November.
Also fighting: Lateef Kayode vs. Alfredo Escalera Jr., eight rounds, cruiserweights
Rating the card: B+. This card is what ShoBox is all about: Young prospects being tested. Avalos will test Martin’s chin. Martin’s crafty, on-his-toes, counter-punching style will test the technical ability of Avalos. The eight-round telecast opener between hard-punching Kayode (12-0, 11 KOs), who is trained by Freddie Roach, and Escalera Jr. (18-2-1, 12 KOs), the capable son of the former 130-pound champ from Puerto Rico, features the same story line.

BREIDIS PRESCOTT vs. HARRISON CUELLO
Rounds / weight class: 10 / junior welterweights
Location: Chicago
Television: ESPN2
The backdrop: Colombia’s heavy-handed Prescott (22-2, 19 KOs) is one-fight removed (a third round TKO over Jason Davis in May) from back-to-back decision losses to Miguel Vazquez and Kevin Mitchell. His one-round blowout of Amir Khan has almost been forgotten by fans. Cuello (19-12-3, 14 KOs), a journeyman/spoiler from the Bronx by way of the Dominican Republic, should give Prescott some quality rounds and a second consecutive victory.
Also fighting: Prentice Brewer vs. Patrick Lopez, eight rounds, junior welterweights
Rating the card: B-. The co-featured bout between Brewer (15-0, 6 KOs), a 22-year-old Cleveland-based prospect, and Lopez (19-2, 11 KOs), a seasoned 32-year-old southpaw from Venezuela, is probably the fight of the night on the Friday Night Fights broadcast. Both boxers are skilled and coming to win. The same probably can’t be said about the main event. Cuello has his pride but he’s 5-8-1 in his last 14 bouts. Not a good sign. It should be noted that among those victories are upsets of one-time prospect Edgar Santana (TKO 3 in 2007) and former 130-pound beltholder Steve Forbes (MD 8 last September). The draw was with 10-1 Rashad Holloway last June and the losses were to prospects and former 140-pound titleholders Randall Bailey and DeMarcus Corley. The card also features popular Chicago-area heavyweight Mike Mollo.

ANTONIO ESCALANTE vs. EDEL RUIZ
Rounds / weight class: 10 / featherweights
Location: El Paso, Texas
Television: Telefutura
The backdrop: Escalante (23-2, 14 KOs), the 25-year-old hometown hero of El Paso, is riding a nine-bout win streak that includes third-round blowouts of former East Coast standouts Mike Oliver and Gary Stark Jr., a 10-round beating of dangerous Cornelius Lock and a 10-round unanimous decision over Mexican rival Miguel Roman in a Fight of the Year candidate in February. Ruiz (34-22-4, 25 KOs), a 32-year-old journeyman from Los Mochis, Mexico, has won four in a row, including a fourth-round stoppage of former 122-pound beltholder Bones Adams, since getting blasted in one round by Robert Guerrero.
Also fighting: Omar Figueroa vs. Kanat Kartenbayev, six rounds, lightweights
Rating the card: C+. The main event doesn’t figure to be very competitive, although Escalante is fun to watch regardless of the level of his opposition. The co-featured bout of the Solo Boxeo broadcast, which pits Figueroa (10-0, 8 KOs), a fresh-faced prospect out of Weslaco, Texas, against Kartenbayev (10-4-2, 4 KOs), a 32-year-old journeyman from Kazakhstan, should be a decent fight. Figueroa is heavy handed but he’s only 20 and hasn’t fought past six rounds. Kartenbayev, who has only been stopped once (by a world-class opponent), has fought the eight-round distance twice and 10 rounds once against experienced opposition. The card also features undefeated Houston-based welterweight prospect Jermell Charlo.

DEVON ALEXANDER vs. ANDREAS KOTELNIK
Rounds / weight class: 12 / junior welterweights
Location: St. Louis
Television: HBO
The backdrop: Alexander (19-0, 12 KOs), a 23-year-old St. Louis native that many boxing writers believe has pound-for-pound potential, takes on his third consecutive RING-rated junior welterweight in former beltholder Kotelnik (31-3-1, 13 KOs), who is coming off a one-sided decision loss to Amir Khan last July.
Also fighting: Tavoris Cloud vs. Glenn Johnson, 12 rounds, light heavyweights
Rating the card: B+. In the main event of this HBO Championship Boxing show, fans will get the chance to see a very special talent continue his fast rise in the sport, but the co-featured bout of the broadcast, a title match between Cloud (20-0, 18 KOs), a boxer-puncher with a take-no-prisoners attitude, and Johnson (49-13-2, 33 KOs), the relentless volume-punching former champ, will no doubt be the fight of the night.