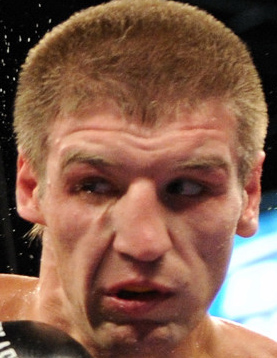 DELVIN RODRIGUEZ vs. ASHLEY THEOPHANE
Rounds / weight class: 10 rounds / welterweights
Location: Miami, Okla.
Television: ESPN2
The backdrop: Rodriguez (25-4-1, 14 KOs) bounced back from back-to-back losses by soundly outpointing former title challenger Mike Arnaoutis in April and move back into contention for a another title shot. The Dominican-born resident of Danbury, Conn., lost a split decision to Issac Hlatshwayo in his only title fight. Theophane (26-4-1, 7 KOs) lost a split decision to unbeaten prospect Danny Garcia in February, a clear indication that the slick-boxing Londoner is no pushover. Theophane has little power.
Also fighting: Donovan George vs. Francisco Sierra, 10 rounds, super middleweights; Andy Lee vs. James Cook, eight rounds, middleweights
Rating the card: C+-. Rodriguez, a regular on the “Friday Nigh Fights” series, proved against Hlatshwayo that he has the ability to win a title.

DANNY GARCIA vs. JORGE ROMERO
Rounds / weight class: 10 rounds / welterweights
Location: Cancun, Mexico
Television: Telefutura
The backdrop: Garcia (17-0, 11 KOs) gave a strong performance in his last fight, a seventh-round KO of Christopher Fernandez, after struggling so badly to outpoint Ashley Theophane that some began to doubt the 22-year-old Philadelphian. Garcia should be able to handle Romero (17-2, 15 KOs). The 20-year-old, from the hometown of Julio Cesar Chavez, Culiacan, has an impressive knockout ratio but has never fought outside his native state of Sinaloa and has lost to journeyman.
Also fighting: Marco Antonio Periban vs. Franco R. Sanchez, eight rounds, light heavyweights; Mauricio Pere vs. Arturo Garduza, eight rounds, middleweights.
Rating the card: C+. The jury is still out on how far Garcia will go but he’s fun to watch. And Romero’s apparent power adds an element of intrigue.

GABE ROSADO vs. DEREK ENNIS
Rounds / weight class: 12 rounds / junior middleweights
Location: Cancun, Mexico
Television: Telefutura
The backdrop: Rosado (14-4, 8 KOs) doesn’t have an eye-popping record but the Philadelphian has had some good moments in the ring. He dropped Fernando Guerrero before losing a close decision early last year and upset Kassim Ouma a few months later. He was KO’d in two rounds by Alfredo Angulo a few months after that. Ennis (21-2-1, 13 KOs) is a solid boxer who has fought primarily in the Philadelphia area.
Also fighting: Anthony Flores vs. Gustavo Dailey, six rounds, junior lightweights; Dennis Hasson vs. Alberto Mercedes, six rounds, super middleweights.
Rating the card: C. Rosado has proved that he can compete against quality opponents. He’s a prospect to watch.

JUAN MANUEL MARQUEZ vs. JUAN DIAZ
Rounds / weight class: 12 rounds / lightweights
Location: Las Vegas
Television: HBO Pay-per-view
The backdrop: Marquez (50-5-1, 37) and Diaz (35-3, 17 KOs) both have a great deal to prove. Marquez, 36, is coming off a pathetically one-sided loss to Floyd Mayweather Jr. at welterweight and is coming back down to lightweight to defend his 135-pound titles. What does he have left? Will the weight fluctuation have an effect on him? Diaz suffered a brutal KO against Marquez and then looked mediocre in two fights against Paulie Malignaggi, in which he went 1-1. Is he declining at only 26? This fight will tell us a great deal about both fighter, one of whom will go on to a bigger fight while the other could face a difficult decision.
Also fighting: Daniel Jacobs vs. Dmitry Pirog, 12 rounds, for a vacant middleweight title; Joel Casamayor vs. Robert Guerrero, 10 rounds, junior welterweights; Jorge Linares vs. Rocky Juarez, 10 rounds, lightweights; Frankie Gomez vs. Ricardo Calzada, 4 rounds, junior welterweights; Sakio Bika vs. Jean Paul Mendy, 12 rounds.
Rating the card: A. This is a very good card top to bottom. Marquez-Diaz isn’t exactly Pacquiao-Mayweather but it’s compelling, particularly coming on the heals of their 2009 Fight of the Year. And the featured undercard fights are all interesting. Jacobs is going for his first title. Guerrero, a rising star, faces a crafty veteran in Casamayor. Linares and Juarez are in must-win situations. Should be fun to watch.

SIMPHIWE NONGQAYI vs. JUAN ALBERTO ROSAS
Rounds / weight class: 12 rounds / junior bantamweights
Location: Tepic, Mexico
Television: Fox Sports en Espanol
The backdrop: Nongqayi (16-0-1, 6) will be defending the 115-pound title he won when he outpointed Jorge Arce in September. The South African is an athletic, skilled boxer but doesn’t have much power. Rosas (31-5, 25 KOs) knocked out his first 17 opponents but hasn’t been mortal against stiffer competition. He lost his biggest fight, a one-sided decision to Fernando Montiel in 2008, but has bounced back with three convincing victories to earn a title shot.
Also fighting: Jorge Arce vs. Martin Castillo, 10 rounds, bantamweights
Rating the card: B-. Any card with Arce on it is worth watching. And, for those who like excellent boxers, Nongqayi is your man.