Marvis Frazier has no regrets 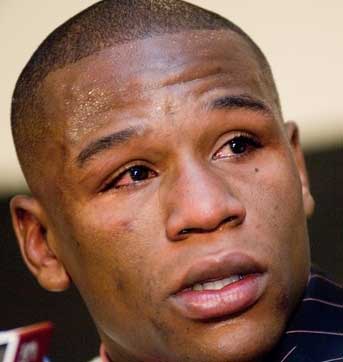 It was 24 years ago next week that Mike Tyson effectively ended the professional career of Marvis Frazier in Glen Falls, New York by demolishing Frazier inside a round.

Yes, Frazier fought thrice more, beating Tom Fischer, Robert Evans and Phillip Brown before retiring at age 28, but the Tyson loss made it painfully clear to all that there would be only one “Frazier” listed among the great heavyweights and his first name was Joe.

Almost a quarter century later, Marvis, now impossibly a grandfather, has no regrets about the way things ended for him in the ring.

Looking back now it seems most improbable that anyone at the time believed that Marvis, who retired at 19-2 (with 8 knockouts), had a serious chance to become the world heavyweight champion.

After all, he hadn’t come up dirt poor like his father had. He was never hungry. He never suffered through minimum wage work in a slaughterhouse. He was a jock in school, wrestling and playing football and basketball: a wealthy man’s son.

The circumstance that drove him to the ring was not a street fight or a stolen bike or poverty. It was watching his father lose to Muhammad Ali in Manila on October 1, 1975 in one of the great heavyweight fights ever.

He wanted to bring the heavyweight title back to the family. He was 15 years old.

“I was in the training camp with all the guys and it was really (sparring partner) Scrap Iron Johnson who told me I could do it. He said, ‘Yeah, you could do it, bring it back, man.'”

Marvis started training at his father’s gym in Philadelphia under Val Colbert and George Benton and five years later he was the top-rated amateur heavyweight in the country.

After winning the national Golden Gloves, Frazier came home feeling good about himself and let it be known during a sparring session with his old man.

“I came back home and thought I was really heavyweight champion of the world. So I was boxing with my dad. I was hitting him with jabs, right hands, I mean I was tagging him,” Frazier said.

“And I was remembering when I was little and thinking, ‘Yeah, this is for the time when I didn’t want to do something and you made me do it,’ you know, in my head, and then I did like a little Ali shuffle. And then BOOM, a left hook caught me. Woo! He caught me and kept me from falling. That’s the last time we sparred.”

Marvis’ amateur victims included Jimmy Clark, Tony Tubbs, Tim Witherspoon and Mitch Green, among others. He was favored to represent the United States in the 1980 Olympics but was upset by James Broad, whose first-round right hand pinched a nerve in Frazier’s neck, temporarily paralyzing him.

He left the amateurs with a record of 56-2 and turned pro.

Frazier was moved quickly, facing 21-1 Steve Zouski in just his fourth pro fight. The ambitious schedule didn’t bother him; he was getting excellent work in the gym, sparring with good fighters: Tex Cobb, Marvin Stinson, Michael Spinks, and Willie “The Worm” Monroe, a local celebrity who had once bested middleweight champion Marvelous Marvin Hagler.

“Willie taught me to move my head because if you didn’t he would bust your nose,” Frazier recalled. “I remember Val telling me, because I said to him, ‘Man, this guy keeps hitting me in the nose. And he said, ‘Just keep coming in, it’s going to change after a while.’ And one day, it changed — he couldn’t hit me and I started hitting him back.

After avenging his loss to Broad and then outpointing veteran contender Joe Bugner (who his father had beaten 10 years earlier) Frazier was offered a fight with world heavyweight champion Larry Holmes. Everyone said it was too soon. Many blasted Joe for pushing his son too fast. Marvis disagreed.

“You couldn’t tell me I wasn’t ready,” he said. “There’s a possibility it was a little early for me at that time but you know, as a warrior you believe there’s no one that can beat you and if you don’t believe that you’re in the wrong place. So I have no regrets.”

Holmes stopped him in the first round but Marvis mounted a comeback, beating, among others, James Tillis, Jose Ribalta and Bonecrusher Smith before meeting Tyson in the Catskills.

“Tyson was just another guy who was going to be a statistic,” Frazier recalled. “Yeah, that’s what I thought. I threw a jab and that’s all I remember.”

He retired after beating Brown in Tucson in 1988 because, “Pop said when it starts feelin’ like a job, do something else. It started feeling like a job. And you got to know when to get out the game. It just didn’t feel like I was there. The spirit left me. I just wasn’t there anymore.”

And unlike so many others who have been where he has, Marvis never attempted a comeback and doesn’t wish he were young again and in the ring.

Today Marvis is engaged to be married to his second wife — his first died of cancer in 2001 — and has two daughters and three granddaughters. Profoundly religious, he spends most of his time preaching, and does occasional security work.

“Life is too short to be unhappy,” he said. “You just got to keep living and loving people. God always has a plan for us and a purpose for us. I don’t think my purpose was to be the heavyweight champion of the world. My purpose is to spread the love of Christ and tell people how much God loves us all. Life is good.”

Clearly, there are things more important than being a champion boxer.

If you were disappointed in Tim Bradley’s performance on HBO Saturday night, it probably means you underestimated Carlos Abregu, who is both tough and good. If welterweight weren’t so packed with top-notch guys he’d be near the topÔÇª

Still looking for the guy who’s strong enough to back up Alfredo Angulo or slick enough to outbox him. And no, Kermit Cintron doesn’t countÔÇª

Don King has been about as relevant as Huey Lewis the last few years, but the show he’s put together for August 7 looks damned good: Devon Alexander-Andriy Kotelnik, Tavoris Cloud-Glen Johnson and Cory Spinks-Cornelius Bundrage. By today’s standards, that’s a blockbuster. Now let’s see if the fighters make enough between them to hit a Denny’s after the fights and not have to run out the back door when the bill arrivesÔÇª

The rumor that Vitali Klitscho will face Shannon Briggs — as reported first by Teddy Atlas on Friday Night Fights a couple weeks ago — won’t go away. If it happens I give Briggs a shot for the first nine seconds or so. After that, not so muchÔÇª

The skill level was deplorably low, but Shawn Porter and Ray Robinson put on a cracking good fight on ShoBox. Good for themÔÇª

I have a theory about Ishe Smith, who is the best fighter in the world who’s lost 20 percent of his bouts and to whom the judges would have been justified giving the win over Fernando Guerrero Saturday night: he doesn’t want to win the bigger fights. Not really. He’d rather lose close and be indignant. Some guys are like thatÔÇª

I usually don’t do commercials, but Al Bernstein is one of the good guys in this business and it’s for a good cause, so what the hell: if you’d like a chance to co-host a radio show for an hour with Al on ESPN radio, go here and click on Al’s photo to place a bid. The proceeds will go to The Caring Place, a non-profit center dedicated to supporting cancer patients. Bernstein's wife co-founded the placeÔÇª

Speaking of good guys in this business — there are a few, here and there — Showtime analyst and former editor of THE RING Steve Farhood will be our guest on the next episode of Ring Theory. You don’t want to miss itÔÇª

Bill Dettloff, THE RING magazine’s Senior Writer, is the co-author, along with Joe Frazier, of “Box Like the Pros.” He is currently working on a biography of Ezzard Charles.

Bill can be contacted at [email protected]