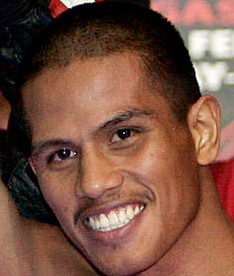 Bernabe Concepcion was a decided underdog in his challenge to undefeated featherweight beltholder Juan Manuel Lopez on Saturday, however the 22-year-old vet possesses the kind of raw athleticism that made many think he could compete with the budding Puerto Rican star.

Concepcion (28-4-1, 15 knockouts) was competitive — for about 10 seconds at the end of the first round when he caught Lopez with a left hook that knocked the 5-to-1 favorite to the seat of his trunks.

However, Lopez (29-0, 26 KOs), THE RING’s No. 2-rated featherweight, exerted his dominance in the second round and Concepcion was stopped for the first time in his career.

The loss dropped Concepcion from No. 6 to No. 9 in THE RING’s 126-pound ratings.

Concepcion’s fall in the featherweight rankings was the most dramatic in week of minor movement in the magazine’s ratings.

“Donaire has expressed that he’s going to move to bantamweight, but THE RING will not rate him there until he has a fight at 118 pounds and builds a solid resume at bantamweight,” Santoliquito said.