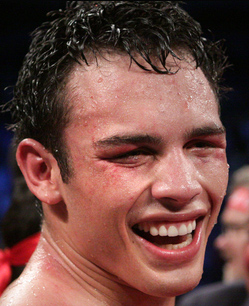 BIGGEST WINNER
Julio Cesar Chavez Jr.: We shouldn’t get carried away in light of the opponent but Junior was impressive against John Duddy on Saturday in San Antonio. Chavez, perhaps for the first time, looked like a real fighter after only four weeks with new trainer Freddie Roach. He dominated the fight from both the outside and the inside in a dominating performance against a limited but tough guy. Again, this doesn’t mean he can beat an elite fighter (and possible opponent) like Sergio Martinez. He can’t. He might be able to compete with a fringe contender or even some Top 10 fighters, though. This might sound wacky but he might actually give Alfredo Angulo some trouble. Bottom line: Junior deserves at least somewhat more respect that he has received.

BIGGEST LOSER
John Duddy: Duddy was Duddy against Chavez, a limited technician who is easy to hit but one who goes down swinging. He certainly has nothing to be ashamed of. This was a bad beating, though, the type that can shorten a fighter’s career. And it wasn’t Duddy’s first taxing fight; he’s had other nights in which he left a part of himself in the ring. That would include brawls against Yory Boy Campas and Walid Smitchet. The wear and tear combined with his limited ability probably means he’ll never realize his dream of winning a major title. This isn’t to suggest Duddy should retire, something he probably won’t even consider at 31. It is to suggest that the charming Irishman might start thinking about what he wants to do after his career ends.

MOST INTRIGUING
Chavez’s future Chavez, still a work in progress, would have trouble with any titleholder or Top 10 middleweight or junior middleweight contender but he probably could make it interesting against several of them. I already mentioned Angulo, a relentless, well-conditioned brawler whose skill level isn’t that much higher than Chavez’s. How about Kelly Pavlik? I’d pick Pavlik in that fight because of advantages in size, strength and experience but that fight might not be as one-sided as we once would’ve thought. And there’s Miguel Cotto, a fellow Top Rank fighter. Cotto gets a significant edge in skill and experience but Chavez is stronger and would be catching Cotto at a good time. Chavez could not compete with the likes of Martinez, Paul Williams and Sergei Dzinziruk. They’re too good.

BEST PROSPECT
Gary Russell Jr.: Three fine young fighters competed on the Fight Night Club card Thursday in Los Angeles – Frankie Gomez, Jesse Vargas and Russell. Gomez and Vargas are thrilling brawlers with the natural ability and commitment to the sport to become elite fighters one day soon. Russell, the former U.S. Olympian, was probably the most impressive of the three on Thursday. He demonstrated excellent boxing skills and off-the-charts hand speed against reasonably capable Rodrigo Aranda, who had recently taken prospects Ronny Rios and Charles Huerta the distance. Aranda simply couldn’t handle the combination of Russell’s speed and ferocity and was stopped in two rounds. Russell has now stopped his last five opponents within three rounds. Now it’s time to step up the opposition.

MOST EXPECTED
Marco Antonio Barrera’s victory: Don’t make too much out of Barrera’s one-sided victory over overmatched Brazilian Adailton De Jesus on the Chavez-Duddy undercard. De Jesus, who also has been knocked out by Yuriorkis Gamboa, is a journeyman at best. Barrera hadn’t fought since he was stopped by Amir Khan 15 months ago yet is talking about fighting the likes of lightweight titleholders Humberto Soto or Miguel Acosta. We all understand that Barrera wants to make as much money as possible before he has no choice but to retire permanently but some fear an opponent like Soto or Acosta could dominate this version of the great Mexican champion. Does he really want to go out that way?

MOST BAFFLING
No pardon for Jack Johnson: The 100th anniversary of the famous 1910 Johnson-Jim Jeffries fight is on July 4, the day the then-hated black heavyweight champion knocked out the greatest of the “Great White Hopes” during a horrendously bigoted time. Not long afterward Johnson was convicted on trumped up charges of transporting a woman over state lines for immoral purposes. President Obama is now considering a pardon for Johnson, whose legacy is stained by the injustice, but he has thus far failed to act. What’s the hold up? The Justice Department has refused to endorse the pardon because, it said, it generally doesn’t support pardoning the deceased. This is an unusual case, though. Johnson was an important figure who was wronged by a vicious society. He deserves justice even after death. And it would mean a great deal to his descendents.

BEST QUOTE
Julio Cesar Chavez Jr. (quoted by The Associated Press): “To fight in the same building that my father did is almost surreal for me. I never thought in my wildest dreams that I’d be headlining at the Alamodome.” Chavez Sr. drew with Pernell Whitaker at the San Antonio Stadium in 1993.