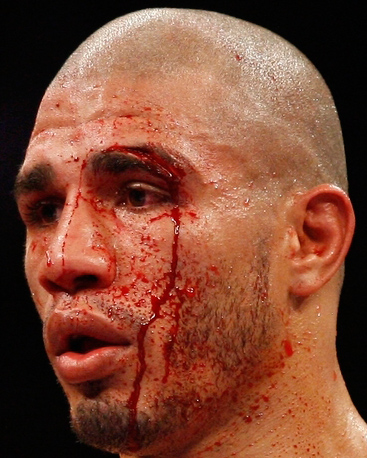 VAZQUEZ-MARQUEZ IV SHOULD NOT HAVE HAPPENED

Dougie,
Before the fight even started I could tell Israel Vazquez's periorbital skin (skin around the eye) was not 100% healed and he was not suitable to fight. Being a surgical resident I have seen and treated several facial lacerations. One thing that is widely accepted is that scar tissue is never as strong as normal skin. In fact the maximum strength that scar tissue can attain is 80% that of normal skin. However even at 80% strength, scar tissue can hold itself together reasonably well. With that being said, the ease with which that cut occurred coupled with the profuse bleeding that followed the cut, tells me that the tissue was not done healing from his previous fight or sparring session. In my opinion the fight should have never happened until that tissue was completely healed. Vazquez lost the fight before even stepping into the ring. — Dre

I think Vazquez’s team knew winning the fourth bout was a longshot even if the veteran had magic surgery that replaced all of his facial skin with cow hide. Vazquez barely got by Angel Priolo, a journeyman who had been knocked out by Brian Viloria at flyweight, last October. His struggle in that fight had more to do with his legs and reflexes than the cuts that were opened up around his eyes. His management knew that his days of being a world-class fighter were over. They also knew that he could retire with a nice-sized nest egg if he had one more fight with Rafael Marquez.

Maybe the ethical thing to do was retire him after the Priolo fight but I don’t think Vazquez would have listened to Frank Espinoza (his longtime manager) at that time. Vazquez was convinced that he still had some fight left in his system. Had Espinoza told Vazquez to hang up his gloves late last year I truly believe the fighter would have continued his career under some other management. I’m not saying that Izzy isn’t a loyal dude but warriors like him are always going to believe they have one great fight left in them.

Hey Dougie,
I hope things are well. Can you please tell me how you see the Miguel Cotto v Yuri Foreman fight going? I have only seen Foreman defeat Daniel Santos so I don't know much about him at all. I can't get a handle on this fight.
Many things have changed for Cotto since his last fight. His father passed away, he has teamed up with Emanuel Steward and he is moving up a weight division. I'm a big fan of Cotto and I hope he does well and wins. If he loses I think his career is over at 29. He has been in many. Have you seen Cotto in preparation for this one? Thanks heaps Dougie. — Choppa B, Sydney, Australia

I have not seen Cotto train for next Saturday’s fight and I have no idea what to expect from him on fight night, but I don’t think junior middleweight is his most effective weight class. And I don’t envision him
having an easy time with Foreman’s height, reach and stick-and-move style.

I think Steward is a good trainer for Cotto, he’ll get the squat boxer-puncher to tighten up his technique and get the most out of his power, but the hall of famer is not a miracle worker. If there are lasting physical effects from Cotto’s brutal losses to Antonio Margarito and Manny Pacquiao, Steward is not going to be able to restore the Puerto Rican star’s legs, reflexes or ability to take a punch.

If Cotto has a confidence issue, however, I think Steward, who could make a nice living as a clinical psychologist if he ever gets sick of boxing, can do wonders for the fighter’s psyche.

And I’ll be honest, I do question what kind of mind frame Cotto is in. The last time I saw him, he was pretty wasted at a bar at one of the host hotels after the Pacquiao-Clottey fight in Dallas. My guess is that he was drowning out his emotional pain. He’s been through a lot lately with his split with uncle/former trainer Evangelista, the loss to Pacquiao, and of course, the passing of his father.

Cotto’s one of my favorite fighters of the past 10 years but I consider him an underdog vs. Foreman, who has been very active and is going to be extremely confident and motivated on June 5. I don’t believe the future rabbi is going to have an easy time with Cotto, but I think Foreman will rise to the occasion and win a competitive unanimous decision.

Hey Doug,
I don't think anyone up here besides Eric Lucas actually thinks he will make it to the final bell against Librado Andrade on Friday. Lucas has a good trainer in Stephane Larouche, who is Bute's trainer as well. Do you think that Larouche saw something in Andrade that Lucas can capitalize on? Because all I can see is Lucas getting painfully sent back to retirement. I really can't understand this fight. Lucas has no chance whatsoever.

I have no idea about the guy Jose Navarro is fighting, which leads me to believe Navarro will probably win tonight.

Let's say he does, do you think he has a shot at finally winning a title? I can't call myself a big Navarro fan but I have followed him a little bit and he’s the type of guy I’d like to see win a belt. — Steve, Montreal

I’d like to see Navarro win a world title, too. He’s one of my favorite people in the sport, and I enjoy watching him box. He got the job done against game journeyman Benji Garcia last night, exhibiting the jab, counter punching and ring generalship that made him a top junior bantamweight contender for four or five years, but he also looked a bit slower at bantamweight than he did at 115 pounds.

I think it’s too early in his comeback to tell if he can go all the way to winning a title shot. He looked sharp enough winning a shutout six-round unanimous decision to move on to the next step — fighting a more skilled and accomplished opponent over eight or 10 rounds — and hopefully he’ll be back in the ring soon. I think Jose, who is now trained by veteran coach Jess Reid, is serious enough about his comeback to make it back to contender status, but he’s got his work cut out for him at bantamweight, which is home to some of the most talented, skilled and complete fighters on the planet (Montiel, Anselmo, Cermeno, Hasegawa, Perez, Mares, Agbeko, and Morel).

The perfect fight for Navarro would be Jorge Arce. That’s a natural main event for L.A.’s Staples Center.

As for Lucas, I think he has to be considered a big underdog vs. Andrade considering his age (38), mileage (19 years in the pro game) and inactivity (only on fight in the last five years). Maybe his trainer believes he can hurt Andrade to the body, given the manner in which Lucian Bute took the Mexican slugger out last year, but I don’t think Lucas is as fast, mobile and nimble as the current undefeated beltholder. I think Andrade will wear Lucas down to a late stoppage in a good fight.

I think it’s time for the cross roads fight — Chris Arreola vs. Samuel Peter. See if you can speak to Henry Ramirez and have him stir the coffee with Dan Goosen and Top Rank to make it happen. “Cant Miss” is all over this one, Doug!!!!!! — Deric

I agree Deric. Peter-Arreola has the makings of one hell of a heavyweight scrap. I have talked to Ramirez (who is Arreola’s trainer for those who don’t know) about this fight, and it’s one that he likes for Chris, but only if his fighter is going to take the matchup seriously and train like a professional for it. Top Rank would make the fight in a minute because Peter has been training hard for his recent seems to have recaptured the fast-and-furious form he had when he was a prospect. But Arreola has not been focused on boxing this year. I won’t go into details but the Mexican Michelin Man has been dealing with personal issues that conflicted with his training for the Tomasz Adamek fight. To say that Arreola showed up to the gym for HALF of the days during his training camp period would be giving him the benefit of the doubt. As Ramirez told me “Chris basically gave Adamek the victory” by refusing to prepare.

I like Arreola — and I still believe in him because, hey, I’m an idiot, as Mayweather fans love to tell me — but there’s no point in pontificating about future matchups for the L.A. native if he’s not going to behave like a professional fighter. I’d love to see him battle David Haye, Alexander Povetkin, Peter, and Adamek in a rematch because those are all action matchups, but if Arreola doesn’t train for them I already know that he’s going to lose those fights. Oh, he’ll make those fights interesting and fun just on guts and stubbornness, but he will be outboxed and outworked if he’s not in 100-percent condition. And when’s the last time we’ve seen him in tip-top shape?

Bottom line: Arreola has to get his personal life in order before we can talk about his professional career.