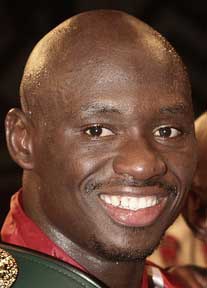 Amir Khan’s U.S. debut against Paul Malignaggi was the highlight of a busy weekend of boxing but the young British star’s dominant victory over the brash New Yorker didn’t dramatically effect THE RING ranking of either junior welterweight.

The major movement in the magazine’s ratings involved veterans.

The most notable of these experienced fighters is former light heavyweight champ Antonio Tarver, who departs THE RING’s 175-pound top 10 after 608 consecutive weeks in the magazine’s ratings.

Tarver, who was rated No. 5 last week, exists due to inactivity. The 41-year-old vet hasn’t fought since a rematch loss to Chad Dawson last May and he doesn’t have a fight scheduled.

Most fans believe Tarver, who serves a commentator on Showtime’s boxing broadcasts, has already begun his transition from the combat side of the sport.

However, despite the very positive reviews he’s received for his broadcast work, Tarver told RingTV.com that he’s not ready to hang up his gloves just yet.

“I appreciate all the kind things fans have said about my commentating work and I’ll to try to get better at it, but as far as my boxing career is concerned I'm definitely still active,” he said. “I’ve been trying to secure a fight with Danny Green in Australia over the last few months.

“I know that he knows that I’m a risky fight. I’m sure his team would rather he continue fighting the Manny Siacas of the boxing world or local guys like Paul Briggs, but Al Haymon (Tarver’s manager) says we’re getting close to making a deal. I think Green wants another soft touch before our fight so I'm looking for a stay-busy fight somewhere near mid-to-late August and then maybe I’ll face Green in November.”

Whether or not the former two-time champ lands the fight with Green and continues his fighting career in earnest, the more than 600 weeks in THE RING’s rankings is something he can be proud of. It means the magazine has considered him to be among the best light heavyweights for more than 11¾ years.

No other fighter currently ranked by THE RING has more than 500 consecutive weeks in the ratings. Only two have more than 400 weeks, flyweight champ Pongsaklek Wonjongkam (479) and No. 5-rated junior bantamweight Alexander Munoz (425).

If Tarver is serious about remaining a world-class light heavyweight he can draw inspiration from Sergiy Dzinziruk, who got back into the junior middleweight rankings with an impressive 10th-round stoppage of once-beaten Daniel Dawson, and Orlando Salido, who found his way back into the rankings following his split-decision rematch victory over Cristobal Cruz.

Salido’s re-entry into the featherweight ratings pushed out pound-for-pound-rated Celestino Caballero, a move that is explained in more detail in the Ratings Update.

Giacobbe Fragomeni falls from No. 5 to No. 8 following is knockout loss to Krzysztof Wlodarczyk, THE RING’s No. 2 contender. Fragomeni’s demotion allows Troy Ross (No. 6 last week), Danny Green (No. 7 last week), and Denis Lebedev (no. 8 last week) to advance one spot each.

Tarver (No. 5 last week) exits due to the fact that he has not fought in more than one year and has no bout scheduled. Tarver’s departure bumps up all 175-pounders rated No. 6 or below last week one rung each and makes room for Chris Henry to return at No. 10.

Undefeated beltholder Dzinziruk, who fell out of the ratings due to inactivity, is back, replacing Deandre Latimore at No. 9.

Khan retained his No. 3 position with a one-sided decision over Malignaggi, who slips from No. 5 to No. 8. Malignaggi’s demotion allows Juan Urango (No. 6 last week), Kaizer Mabuza (No. 7 last week), and Adreas Kotelnik (No. 8 last week) to advance one slot each.

Kevin Mitchell (No. 9 last week) is gone following his third-round knockout loss to No. 1 contender Michael Katsidis. Mitchell’s exits pushes up John Murray from No. 10 to No. 9 and makes room for Roberto Guerrero to debut at No. 10.

Salido (unranked last week) rockets to the No. 3 spot following his 12-round decision over Cruz, who slips to No. 4. All 126-pounders ranked rated No. 4 or below last week are forced down one notch each by Salido’s inclusion. This also forces out Celestino Caballero (No. 10) last week.

“Although Celestino Caballero remains No. 10 in THE RING’s pound-for-pound ratings, he loses his featherweight ranking because he has only fought once at 126 pounds since moving up from the junior featherweight division,” said Nigel Collins, Editor-in-Chief of THE RING magazine. “Caballero could possibly be the best featherweight in the world, but our divisional ratings are based on results within the particular weight class. Boxers, such as Caballero, who move from one division to another have to fight their way up the rankings by beating top men in their new division. It would be unfair to the fighters who have been campaigning at the weight on a regular basis to do otherwise.”

Longtime flyweight beltholder Omar Narvaez moves up and enters at No. 10 on the strength of his victory over Everth Briceno. Narvaez’ debut at 115-pounds bumps Jorge Arce (No. 10 last week) out of the ratings. The decision to drop Arce was predicated on the fact that his most recent fight was at bantamweight and his next scheduled bout, against Eric Morel, is also at bantamweight.

Narvaez (No. 5 last week) is now campaigning as a junior bantamweight. Narvaez’ exit allows all 112-pounders rated No. 6 or below last week to climbs one rung each and makes room for Richie Mepranum to debut at No. 10.