Arum will ‘do darndest’ to make Pacquiao-Mayweather happen 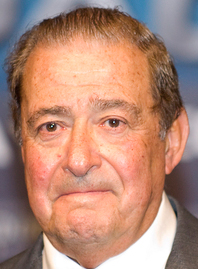 Bob Arum, Manny Pacquiao’s promoter, said Wednesday that he will try to make a fight with Floyd Mayweather Jr. in November but refused to offer details for fear of jeopardizing any possible agreement.

Arum had just returned from the Philippines, where he went to support Pacquiao in his successful bid to become a congressman in his home province of Sarangani in southern Philippines.

“It’s amazing how many people came up to me as I was leaving the Philippines and asked me, ‘When is the Mayweather fight going to happen?'” Arum said on a conference call. “That’s the fight people want to see. That’s the fight I’m going to do my darnedest to make happen. I don’t want to discuss any of the issues to make that fight because we’re going to be involved in negotiations. My first goal and Manny’s first goal is to make it happen.

” ÔÇª I’ll not negotiate this thing in the press, though. If I do, given the egos of both camps, it’s just never going to happen.”

Arum wouldn’t indicate when the talks will begin other than to say, “I have my marching orders. It will be sooner rather than later.”

Arum has reserved a target date – Nov. 13 – at Cowboys Stadium and said Pacquiao will definitely fight in that month. However, he said the site of a prospective fight with Mayweather could also take place at the MGM Grand in Las Vegas and would be part of the negotiations.

He also said a pending lawsuit against several people connected to Mayweather for suggesting Pacquiao took performance-enhancing drugs might come up in the talks.

Negotiations for a March 13 fight broke off after Mayweather demanded that Olympic-style drug testing be used for the fight and Pacquiao balked, saying Mayweather had no right to make such demands and that he believes giving blood weakens him.

Arum was asked whether he can see either side softening their stances.

“Negotiations are negotiations,” he said. “A lot of nice things can happen if people negotiate in good faith, if people want something to happen. We’ll negotiate without going through the media and see what happens.”

He further explained his reasons for staying tight lipped.

“Once you start negotiating through the media, it becomes an ego contest,” he said. “Then each side can’t wait to give his statement to the press. The flames just shoot up and there’s no real opportunity for rational behavior to take over.”

Arum reiterated that the No. 1 alternative is Antonio Margarito – probably at Cowboys Stadium — if a fight with Mayweather can’t be made.

Margarito is coming off a one-sided decision over Roberto Garcia in Mexico in his comeback fight after more than a year away from the sport. He was suspended in California because he was caught with illegal pads in his hand wraps before his fight against Shane Mosley early last year.

“Obviously, if we went to a Margarito fight, he would apply for a license in the state he’s going to fight in next. Whether that’s Nevada or Texas, we would expect a good result,” Arum said.

Arum said his trip to the Philippines was among the most-gratifying of his life, joking that “I think now I’m considering whether to pack it in as a boxing promoter and be a political consultant.”

Pacquiao defeated Roy Chiongbian, whose family has controlled both economically and politically the region in which the fighter won the election for the past 25 years, Arums said.

“People don’t realize that this victory over the candidate he beat was a tremendous upset,” Arum said. “Nobody, very few people expected him to pull it off. The Chiongbian family holds all the major businesses in the province. Every major elected official in the province – governors, mayors, all of them – are either related to the family or are associates of the family. Mannny Pacquiao was running against the elder son in the family. They hadn’t been defeated, had won overwhelmingly, in every election contest for 25 years. And Manny Pacquiao, with his grit and determination, was able not only to win but win by a landslide.

The obvious question in terms of boxing is whether Pacquiao will have the time to train properly in light of his new duties.

Arum isn’t worried. Pacquiao will have time to be a public servant before he opens camp for his next fight and can use down time during training for his new work.

“When he’s training, he runs in the morning and then sleeps,” he said. “Then he trains in the gym. Then he eats dinner. Then he has all this free time. You’ve seen it on (HBO’s) 24/7. He sings, he’s around his people. He’ll have a lot of free time to devote to his political responsibilities.”

Arum said Pacquiao has indicated that he’ll probably fight three more times. After that, the sky is the limit.

“When he’s 35, he can run for the senate in the Philippines,” he said. “By the time he’s 40, he’ll be, I’m sure, president of the Philippines. This man is something special. We’re blessed to have him as part of the sport.”