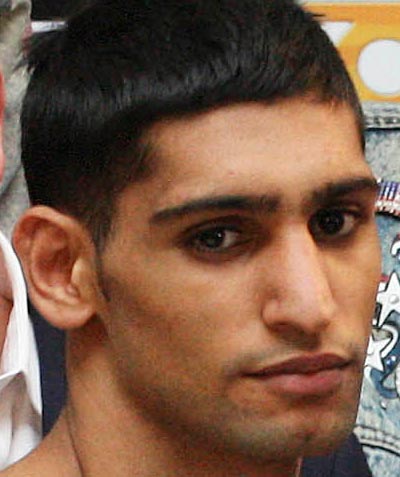 The Paul Williams-Kermit Cintron fight on Saturday was just heating up when Cintron fell through the ropes and the fight ended. Photo / Naoki Fukuda

Williams vs. Cintron: The interesting junior middleweight matchup on Saturday in Carson, Calif., which moved slowly in the first few rounds, seemed to be picking up steam when the fighters got tangled in the fourth round. Williams went down and Cintron went out — through the ropes, onto a table and then to the floor. A ring doctor decided that it would be too risky for Cintron to continue in spite of his apparent protestations and he was carried off in a stretcher. Williams was awarded a split technical decision but really nothing was accomplished, to which many disappointed fans at the Home Depot Center and watching on TV would attest. I can’t remember a situation in which a rematch was more warranted.

California’s: In California, a fight that ends by an accidental foul or injury goes to the scorecards if the fourth round has begun and the scoring includes the partial final round. The fourth round must be completed according to the rules of the Association of Boxing Commissions. I don’t think another 2 minutes, 25 seconds of boxing (Cintron flew out of the ring about 35 seconds into the round) would’ve clarified anything. But I do believe we should have uniform rules nationwide — and worldwide — if possible. Also, I believe those calling for the result to be changed to a no-contest will be disappointed. Officials used the rule in place. They can change the rule but it won’t — or shouldn’t — apply to this fight.

Paul Williams’: A victory is a victory but this one was next to meaningless. Williams was unusually cautious in the first few rounds, probably because Cintron was fighting well, but appeared to be picking up the pace when Cintron went through the ropes and the fight ended. The fight had the feel of a no-contest even if it was a technical victory for Williams, which means it was neither a step forward nor a step backward for him. Williams hasn’t had an impressive victory since he easily outpointed Winky Wright 15 months ago. Let’s hope that Williams and Cintron agree to terms on a rematch and pick up where they left off.

Kermit Cintron: Cintron fought cautiously but looked sharp and seemed to be a legitimate threat to upset Williams during the short bout, which would’ve been a career-changing victory for him. Instead, the bizarre ending and the fact he lost a split decision left him devastated. He pounded his gloves together in frustration even as he was being placed into an ambulance, aware immediately of what slipped away. Here’s the good news: If he did it once, he can do it again. The former wrestler and late comer to boxing might yet have a great performance in him. He deserves another chance to show it.

Kermit Cintron’s: I generally hate to second guess ring doctors, who are right to err on the side of caution when it comes to injured fighters. Cintron raised a good question in a video interview on badlefthook.com, though. He asked: “Why didn’t the doctors give me my five minutes?” He was referring to the rule that allows him five minutes to recover after such an incident as occurred Saturday. Cintron said he told the ring doctors that he merely had the wind knocked out of him and that he wanted to continue fighting. A few more minutes might’ve made that clear had the doctors allowed him the time. As it was, they might’ve been overly cautious and Cintron paid the price. Again, however, it’s hard to fault the doctors.

Antonio Margarito: The former three-time welterweight titleholder looked somewhat rusty against Roberto Garcia on Saturday in Aguascalientes, Mexico, which is understandable in light of his long layoff. We wonder whether a sharp version of Margarito would’ve broken down someone like Garcia. But Margarito did what he had to do — win. He’ll probably take another fight or two and then — assuming he can get licensed in the U.S. — possibly face Manny Pacquiao, which would allow him to make up tenfold for any money he lost during his suspension. Promoter Bob Arum, who handles both fighters, thinks that matchup could fill Cowboys Stadium. Other interesting possibilities for Margarito: Sergio Martinez and Alfredo Angulo.

Yordanis Despaigne: The Cuban defector isn’t reminiscent of compatriots Yuriorkis Gamboa, Erislandy Lara and Guillermo Rigondeaux but he gave a nice performance against Richard Hall in a 10-round light heavyweight fight on Friday night. Hall, a big puncher and one-time contender, is 38 and has been inactive the past few years but he had a pronounced edge in experience. Despaigne, an accomplished amateur, had only five pro fights compared to 36 for Hall. Plus, the Cuban was left with little time to prepare for a rangy southpaw because the fight was made on short notice. Thus, a shut out on national TV that helps set up bigger fights in his near future was reason for he and his handlers to celebrate.

Danny Garcia: The unbeaten junior welterweight from Philadelphia, perhaps starting to take victories for granted, looked shaky in his split-decision victory over Ashley Theophane of England in February but apparently learned from the experience. Garcia dominated Chris Fernandez on national television, slowly but surely breaking down his foe before landing several brutal power punches in the seventh round that prompted Fernandez’s corner to throw in the towel. Garcia wasn’t the only hot prospect on the Philadelphia card. Karl Dargan, trained by cousin Naazim Richardson, beat Jorge Diaz to remain undefeated. He is one to watch.

Manny Pacquiao: The No. 1 fighter in the world is a candidate for a congressional seat in today’s (Monday’s) election in the Philippines and reportedly is doing well in the polls. I have no idea what kind of public servant he would be but I believe his heart is in the right place. Pacquiao grew up in dire poverty, which I suspect allows those similar circumstances to relate to him. And he comes across as very genuine when he discusses his reasons for going into politics. He genuinely wants to help his people. In terms of his boxing career, if he wins, I still wonder how he would be able to train for a big fight and fulfill his duties as a congressman. One thing I know: He’ll work hard to make it work.

Freddie Roach, on how Pacquaio would do against Mayweather (as told to the Manila Bulletin): “Easy (fight). Manny’s going to knock him out. ÔÇª He couldn’t move, he’s got no more legs.” You gotta love Freddie Roach.