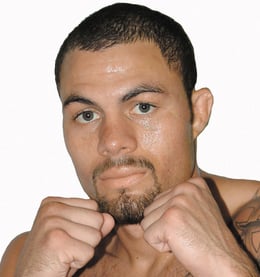 Kermit Cintron, who fell through the ropes during his fight with Paul Williams and had to be carried out on a stretcher, had a bad night in Carson, Calif., on Saturday. Photo / Craig Bennett-Fightwireimages.com

How’s this for a bad turn of events just as his junior middleweight showdown with Paul Williams was getting interesting:

He was tossed from the ring midway through the fourth round, shortly after rocking Williams with a big right hand.

He banged his head on a ringside table and the floor of the Home Depot Center.

The ringside physician, Dr. Paul Wallace, would not allow him to continue fighting even though he said he wanted to get back into the ring.

Cintron was carried out of the outdoor tennis arena on a stretcher as it was being announced that he lost the three-and half-round fight by a technical split decision.

It doesn’t get any worse than that.

It wasn’t so much the scorecards, which the New York-based promoter disagreed with, that irked DiBella. It was the fact that the scheduled 12-round bout was governed by the rules of the California State Athletic Commission, which allows a bout to go to the scorecards as long as three rounds have been completed and the fourth round has started.

Under California rules, the fourth round of a bout that is stopped due to an accidental foul or injury is scored even if it only lasts a little over a minute as the round for Williams-Cintron did.

“Who should get a loss after three and a half rounds?” DiBella pleaded to the ringside media, many of whom agreed that his fighter was winning at the time of the stoppage. “That shouldn’t count against my guy.”

Under the Association of Boxing Commission’s unified rules, which usually govern title bouts and high-profile bouts scheduled for 12 rounds that take place in the U.S., four rounds must be completed before a fight can go to the scorecards. If a fight is stopped before the end of the fourth round the bout is declared a No Decision under the unified rules.

DiBella and Cintron’s trainer Ronnie Shields believe a No Decision was the correct call in a professional bout that ended before it really got started.

“We need uniformity in our rules just for this sort of thing, because this is a dumb-ass rule they have in California,” DiBella said.

“We didn’t want California rules for this fight,” Shields said. “We complained to the officials when they told us before the fight. I called Kermit’s manager into the dressing room to protest that decision because we wanted the ABC (Association of Boxing Commissions) rules.

“I can see using California rules for a four- or six-round bout, but this was a 12-round fight.”

It wasn’t much of a fight before the start of the fourth.

For the first three rounds Williams and Cintron, two giant welterweights fighting at junior middleweight because most 147 pounders avoid them, were like the two biggest kids in school getting into a playground stand off, both afraid to throw a punch.

Williams was the first to react to the boos from the sparse crowd in the tennis arena. The towering southpaw pressed the attack at the start of the fourth round and ran into a big right hand from Cintron (32-3-1, 28 KOs). Williams was rocked but immediately fired back with a hard left of his own. Suddenly the fight was on and the crowd erupted as the two fighters briefly exchanged heavy punches.

However, the cheers turned into a collective “Ooooh!” when the two tumbled to the canvas and Cintron was thrown from the ring.

“He hit me with a nice little shot and I hit him with a nice shot,” Williams recalled after the fight. “We were both throwing punches and we got tangled up. He fell out of the ring. I saw him trying to get up.

DiBella and company want Williams to say that he will grant Cintron a rematch.

“I know that Paul’s a man’s man and if it’s up to him he will fight Kermit again,” DiBella said.

Williams, unhappy with the way the fight ended, probably is in favor of a return bout.

“I don’t want to see a fighter get hurt like that. I wanted to hurt him with a punch, not by him falling out of the ring. I hope he’s alright.”

Cintron was taken to Harbor-UCLA Hospital in nearby Torrance, Calif., for a precautionary examination.

He’s probably fine. He seemed a alert as he pleaded his case with Dr. Wallace, who under California rules had the authority to halt the bout.

However, the bad taste of California’s rules will probably linger a lot longer than the pain from the bump on his head.

The fans in attendance also had a bad night.

“I feel bad for the fans,” Williams said. “They didn’t get their monies worth.”