Haye: Not your grandfather’s British heavyweight 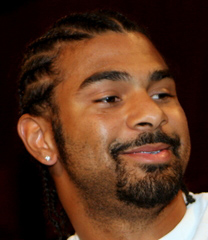 If David Haye’s recent stoppage of veteran barnacle John Ruiz did little to convince the masses of his legitimacy as a title challenger to the two-headed monarchy that is The Brothers Klitschko, it was not totally without merit.

It may have reduced to complete irrelevance the term “horizontal heavyweights.”

For those of you who came to boxing over the last 10 or 15 years or so, or during what we reluctantly will call the Lennox Lewis era, the term is a mild pejorative once used to describe British heavyweights.

Veteran observers will recall that time when decades came and went without the Brits producing any big man of much note, or at least one who could stay with the better American heavyweights.

You had to go all the way back to Bob Fitzsimmons, who won the title in 1897 against James J. Corbett, to find a product of the United Kingdom who wore the heavyweight crown. And even that could be noted with an asterisk: Though born in Helston, Cornwall, Fitzsimmons was a small boy when he and his family moved to New Zealand.

That it took a century for Lennox Lewis to arrive and win it again and then almost 10 years more for Haye to happen along could be viewed as something as an embarrassment, considering England is the birthplace of modern boxing.

“I would say that Lewis and Haye have banished forever the image of British horizontal heavyweights, even if neither possessed the chin of George Chuvalo,” author and Ireland-based historian Patrick Myler told RingTV.com.

“Lewis and Haye have the essential heavyweight requirement of a pulverising punch, backed by decent skills, movement and supreme confidence. British fans talk nostalgically of Henry Cooper, Tommy Farr and Frank Bruno, but none of these could hold a candle to Lewis and Haye.”

Haye (23-1, 22 knockouts) is indisputably a top heavyweight – THE RING ranks him second, right behind Vitali Klitschko – and already has caused a stir in an otherwise moribund division, even if reviews are mixed.

“He only did what he was expected to do (against Ruiz),” Colin Hart, considered the dean of British boxing writers, told RingTV.com.

“He did it rather well and he did it excitingly, and he’s a charismatic character and the British have now fallen in love with him. He’s a good talker, has a good personality and is a breath of fresh air for the heavyweight division.”

Charisma aside, Haye’s ascension toward the top of the heavyweight division – and, to a lesser degree, Lewis’ before him – has been aided by the shortage of good American heavyweights, which has produced what Hart said is the worst group of heavyweights he has seen over the course of his career, which spans 40 years.

“Never in my working time have I ever seen such a poor division and it is dominated by the Eastern Europeans, who are the present day hungry fighters,” he said.

“But I was spoiled by covering what I call the golden age of heavyweight boxing, which was the era that gave us Ali and Frazier and Foreman and Norton and Jerry Quarry and Jimmy Young and Ron Lyle and so many others. Even Joe Bugner would be a heavyweight champion today.”

Myler agrees that the success of Lewis and now Haye does not necessarily reflect an improvement in British heavyweights that took place in a vacuum.

“It has a lot to do with the dearth of good American heavyweights, admittedly,” Myler said. “We can all remember when Americans dominated the division since Gentleman Jim Corbett won the first world heavyweight title fight with gloves, but where today is the Larry Holmes, the Mike Tyson, even the Tim Witherspoon?

“While we Europeans rejoice in the upsurge of heavyweight talent that now allows us to monopolize the alphabet bodies strap, we would welcome the emergence of an exciting, hard-hitting American for a change. Haye and Lewis might have competed well in average eras, but would have bitten the dust against Louis, Marciano or Dempsey.”

As one American heavyweight after another has fallen to a Klitschko – nine over the last four years by our count – American boxing fans have turned to the lower weights, where fighters from the United States remain among the very best; of the 10 fighters that make up THE RING’s pound-for-pound ranking, five are American.

But at heavyweight, once the game’s glory division, America’s loss is England’s gain.

The latest installment of Fight Camp 360 was as entertaining as its predecessors. Speaking of which, I know that as a member of the boxing writers union I’m supposed to believe Andre Dirrell was seeing a bright light and dead relatives after taking Arthur Abraham’s uppercut, for cripes’ sake, but I still don’t buy it. ÔÇª

What a sweet gig Jimmy Montoya has lucked into. He doesn’t have to do anything with Mikkel Kessler to get his man a win over Carl Froch other than to remind him to punch. Unless Kessler has lost his zest for battle, he should find Froch an easy target. ÔÇª

Note to all Indonesian boxing trainers: The mullet is out. Let’s move on. ÔÇª

Only the guys who put together HBO’s 24/7 could use the theme from Rocky during a training montage and not have it seem trite and clich├®d. Well done, boys. ÔÇª

Add me to the list of those who think Andre Berto’s chin will be his undoing. ÔÇª

The best recent news in boxing? Joe Calzaghe is having a hard time with retirement. Come on back, Joe. You know you want to. Won’t it feel great to pull out of a fight again? ÔÇª

I’ve taken a lot of shots at Gary Shaw over the years, but give him this: He’s not afraid to put his guys in fights that, on paper at least, look tough. Tim Bradley-Marcos Maidana is a good example. ÔÇª

There’s been a lot of misplaced outrage over Hasim Rahman’s win over one Clinton Boldridge in late March, I guess because Boldridge wins a fight for about every two that he loses. Know this: Not only does the game need guys like Boldridge, but guys who do what he does are no danger to themselves or anyone else. For more on that subject, go here: https://www.ringtv.com/blog/528/a_journeyman_who_enjoys_the_journey/

Bill Dettloff can be reached at [email protected] You can read his articles every month in THE RING magazine.