Hauser: Officials got it wrong in three recent fights 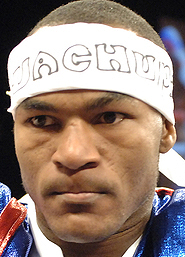 HBO would send a strong message if it banned Joan Guzman (right) for coming in nine pounds overweight for his recent fight against Ali Funeka. Photo / Tom Hogan-Hoganphotos-Golden Boy Promotions

One fight slated for last month was canceled. Two others should have been.

Steve Cunningham (promoted by Don King Productions) and Matt Godfrey (promoted by Jimmy Burchfield) were supposed to fight on March 26 for the vacant IBF cruiserweight title on ESPN2 Friday Night Fights. The match-up had gone to purse bid with the winning bid ($65,200) coming from King.

Then King and ESPN reached a contractual impasse over clauses in the network’s standard form contract that give ESPN foreign rights and income from ring-mat advertising. On March 17, DKP announced that the fight was off. That left King in default. After some confusion within the IBF, it was determined that the right to promote Cunningham-Godfrey resided with Main Events (the runner-up bidder), which had ninety days to promote the fight.

Rather than wait, Main Events quickly put the pieces of a new puzzle together. It applied for a promotional license in Illinois; received approval for the fight from the Illinois State Athletic Commission; arranged with local promoter Dominic Pesoli to put the fight at the top of an already-scheduled night of boxing that Persoli was promoting in Chicago; and arranged with ESPN2 to televise the fight.

That left one problem. While Cunningham had continued to train for the March 26 match-up, Godfrey hadn’t. On Friday, March 19 (or Saturday, March 20, depending on one’s version of events), Godfrey was told that the fight was back on. And Godfrey said, “No, thank you.”

Thereafter, IBF president Marian Muhammad announced that the IBF was dropping Godfrey from its rankings and replacing him with Troy Ross (who presumably will fight Cunningham at some point in the future). Godfrey has been pilloried in the boxing media.

But it’s not that simple.

Godfrey didn’t fight professionally for six years and train hard for a championship bout with the intention of blowing that bout off without cause. Two days off from training (and not watching one’s diet during those two days) in close proximity to a fight can make it exponentially harder for a fighter to make weight.

Also, whether one approves or not, fighters have been known to relax by taking a puff or two when there’s no fight on the horizon. I have no idea what Matt Godrey’s habits are. But it’s not beyond the realm of possibility that he put something in his system that might have shown up in a urine test and thus rendered fighting on March 26 impractical.

Nor will punishing Godfrey help Steve Cunningham, who’s the other victim in this mess. The culprit is Don King, who failed to make good on his contractual obligation to promote the fight. Under IBF Rules, King has forfeited the 20 percent deposit ($13,040) on his purse bid. That money will be divided equally between Godfrey and Cunningham. Further penalties by way of litigation might be in order.

Meanwhile, the March 27 rematch between Ali Funeka and Joan Guzman should have been called off but wasn’t. That fight, televised by HBO on Boxing After Dark, was for the vacant 135-pound IBF title.

Guzman has a history of weight problems. Eighteen months ago, his title fight against Nate Campbell was canceled when he came in 3¾ pounds overweight. So it was no surprise when Joan failed to make weight for Funeka II. What was surprising was that he weighed in for his latest 135-pound fight at 144 pounds.

The always-eager-for-sanctioning fees IBF decreed that the fight could proceed as long as Guzman didn’t weigh more than 150 pounds at 7 o’clock on Saturday morning. If Funeka won, he would be the IBF champion. If Guzman prevailed, the title would remain vacant.

Then the Nevada State Athletic Commission (which has become a prime enabler of misconduct) gave its blessing to the bout after announcing that Guzman would be fined 25 percent of his purse (with half of the fine going to Funeka and the other half enriching the state’s coffers).

At that point, HBO should have pulled the plug on the telecast. Presumably, its contract allowed it to do so. If not, HBO needs better contracts. After all, HBO contracted for a competitive fight between in-shape fighters at 135 pounds.

Instead, HBO presented a farce to its subscribers. The fighters weighed in again on Saturday morning. Guzman tipped the scales at 148 pounds, Funeka at 143. In all likelihood, Guzman entered the ring one, and possibly two weight classes above Funeka. We don’t know what the final weight differential was because, when fight night arrived, HBO didn’t ask the combatants to get on “the unofficial HBO scale.” Guzman won a split decision.

HBO should state plainly and simply that it will not televise Guzman in the future. That would send a message and go a long way toward eliminating the growing problem of fighters blowing off their contractual obligations with regard to making weight.

And, finally, Hasim Rahman, we’re advised via press release, made a triumphant return to the ring on March 27 when he knocked out Clinton Boldridge in the first round of a “special attraction” bout in Kansas City.

Question: Who is Clinton Boldridge?

Answer: He’s a 43-year-old heavyweight with a 9-16 record. What makes this record remarkable is that all sixteen of Boldridge’s losses have come by way of knockout.

Rahman-Boldridge was a grotesque mismatch. The state of Missouri should not have approved it.

Thomas Hauser can be reached by e-mail at [email protected] His most recent book (“An Unforgiving Sport”) was published by the University of Arkansas Press.