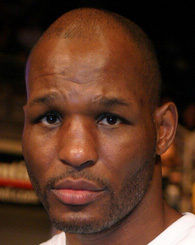 Light heavyweight prospect Ismayl Sillakh (right) lands a big right cross to David Whittom en route to stopping the tough journeyman in the sixth round of their bout that took place on May 9, 2009. Photo by Ray Kasprowicz / Fightwireimages.com

Best night of pro career: Stopped rugged Canadian journeyman David Whittom (10-8, 6 KOs) in the sixth round of their scheduled six-rounder on the undercard of the Chad Dawson-Antonio Tarver rematch last May. Whittom had gone the distance with then-light heavyweight titleholder Adrian Diaconu (25-0 at the time) and hard-punching former super middleweight beltholder Manny Siaca (20-6 at the time) in his two previous bouts. Sillakh, who used intelligent pressure and combination punching to wear down his more experienced foe, was in his eighth pro bout.

Worst night of pro career: Was taken the distance the first and only time of his pro career by Armen Azizian in a six-round bout that took place in Germany in October of 2008. Sillakh, who traveled to Germany only a few days before the bout and may have been jetlagged from the long plane ride, fought a sluggish bout (by his standards). Sillakh dropped Azizian in the third round but could not finish the tough Armenian journeyman.

Next fight: Takes on former contender Daniel Judah (23-4-3, 10 KOs) on the undercard of the Bernard Hopkins-Roy Jones Jr. rematch at the Mandalay Bay Resort & Casino in Las Vegas on Saturday. The 10-round bout will kick off the live pay-per-view broadcast. Sillakh’s first television exposure in the U.S. will come against his most experienced opponent. Judah has gone the 12-round distance three times during his 11-year pro career and the 10-round distance four times, including a draw and a loss to former champ Glen Johnson.

Why he’s a prospect: Standing almost 6-foot-4 with the wingspan of a heavyweight and possessing above-average speed and power it’s obvious that Sillakh has the physical tools to compete in 175-pound division. Factor in the technique and poise he carries from his decorated amateur career — which includes 2001 World Junior and European Junior Championship gold medals in the middleweight division and a 2007 European Championship silver medal in the open light heavyweight division — and it’s possible that Sillakh could be something really special.

Why he’s a suspect: The word from the European amateur scene is that for all his skill and talent, Sillakh does not take a good punch. He had trouble with aggressive and hard-punching amateur standouts such as Russia’s Artur Beterbiyev (who scored a standing 8-count en route to a points win at the 2006 European Championships) and Ireland’s Andy Lee (who out-pointed Sillakh at the 2002 World Junior Championships). In the pro ranks, he was rocked by an overhand right from Whittom during their fight but defended himself well while he quickly recovered to return fire before the round had ended.

Story lines: Sillakh grew up in an educated, middle-class household in Zaporozhye, Ukraine. His parents — Mohammad of Sierra Leon and Natalya, a Ukraine native — met in college and had no particular connection to boxing but he found the sport at a local recreation center at age seven and quickly discovered that he had the athletic ability to excel at it. He began competing at age nine and was recognized as one of Ukraine’s better amateurs a few years later before establishing himself as one of Europe’s premier open-class boxers. Sillakh had been a world-ranked amateur for two years going into the 2007 World Championships in Chicago where he lost a close and spirited slugfest to the more mature Christopher Downs. It was in Chicago that manager Ivaylo Gotzev got his first look at Sillakh.

“I had no idea who he was when I first saw him, but there was an aura about him, a presence to this kid that the others lacked,” Gotzev said. “He threw some crazy combinations with a fluid style that blew me away.”

After the tournament Gotzev talked to Sillakh about his future, including the possibility of staying amateur. Sillakh told him that he wanted to turn pro and insisted on relocating to America, where he felt he would receive the best instruction and development.

Gotzev, who has a home in Southern California, asked L.A.-based trainer Shadeed Saluki to take a look at Sillakh in the gym. Saluki, who trained former heavyweight titleholder Lamon Brewster and former multi-division champ James Toney, loved what he saw and agreed to train the young man.

“At times he reminds me a of a young Ali,” Saluki said. “He makes moves you really can’t teach. You have to let a fighter like that be free in the gym and I think he’s blended in well in Southern California because he’s very confident. The only drawback to training him is that it’s hard to find quality sparring. We go everywhere — to the Wild Card, the Fortune Gym, Joe Goossen’s gym — to find sparring, even against heavyweights, but people know who he is now. ‘Is that The Black Russian?’ they ask and they turn him down.”