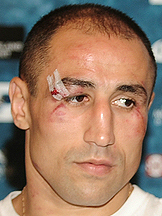 The respective promoters of Arthur Abraham and Andrell Dirrell issued statements after Abraham was disqualified for hitting Dirrell while he was down on Saturday in Detroit. Here are their unedited statements.

Wilfried Sauerland: “Arthur would have knocked Dirrell out”

DETROIT (March 28, 2010) ÔÇö Wilfried Sauerland has no doubts that Super Six World Boxing Classic tournament point leader King Arthur Abraham would have knocked Andre Dirrell out had it not been for his controversial disqualification in the 11th round. “After a slow start, Arthur was finally landing his power punches,” Sauerland said. “He clearly knocked Dirrell down in the tenth and was following it up in the 11th. There is no way Dirrell would have seen the end of the 12th round.”

After reviewing the tape, Sauerland stated that a clearly exhausted Dirrell seized his chance to sneak out of the fight when the chance presented itself, especially with Abraham upping pressure before the controversial ending. “The TV pictures indicate that Dirrell was down, but there is no way Arthur could have realized that in the heat of the moment. He was just trying to keep up the attack. However, Dirrell is a very good actor. We are glad that his check-up at the hospital turned out just fine but frankly we did not expect any other outcome since he was just acting. He deserves an Oscar for his performance.”

The 26-year-old American was taken to hospital after the fight. “I wish him all the best and hope he is fine,” Abraham said. “I thought I could still punch because the referee did not stop us. In the heat of the moment I was not watching his feet but only his head. As a professional boxer, you always try and make pressure.”

Abraham said it was a very competitive fight. “I am a slow starter,” he added. “That is how I fight. But I picked up in the later rounds and connected.” Abraham was knocked down for the first time his career in the fourth but returned the favour in the tenth when he floored Dirrell, although no knock-down was credited.

DETROIT (March 28, 2010) – Not satisfied with Arthur Abraham’s underhanded performance against Andre Dirrell on Saturday night at Joe Louis Arena, which would warrant his suspension by most members of the Association of Boxing Commissions (ABC), Abraham’s promoter Wilfried Sauerland issued a release on Sunday accusing Dirrell of seizing “ÔÇª his chance to sneak out of the fight when the chance presented itself. ÔÇª Dirrell is a very good actor.”

The “chance” Sauerland was referring to was when Dirrell (19-1, 13 KOs), of Flint, Mich., did the “splits” after slipping in Abraham’s (31-1, 25 KOs), of Germany, water-soaked corner, and while on one knee and defenseless got knocked out by a sweeping Abraham right. Referee Laurence Cole immediately stopped the fight at 1:13 of the 11th round, awarding the victory, via disqualification, to Dirrell, who was leading on all three judges’ scorecards by 98-91, 97-92 and 97-92. It was the opening bout of the Group Stage 2 of the Super Six World Boxing Classic.

“Sauerland is a sourpuss. Is he Abraham’s promoter or minister of propaganda?” asked Gary Shaw, Dirrell’s promoter. “Maybe Abraham is used to having his partners fake it, but thanks to Showtime, the world witnessed not just Abraham’s heinous act, but a multitude of replays from every angle showing that Abraham was looking at Andre while he was down on the canvas before deliberately unleashing his illegal blow. As far as I’m concerned, Abraham is a coward and his promoter is an enabler. It was a desperate act by a desperate man.”

“But rather than dwell on a pack of lies, let’s focus on Andre’s magnificent performance,” Shaw continued. “He tagged Abraham with his first knockdown and his first loss in a 31-bout professional career. Both are huge accomplishments. Plain and simple, Andre boxed Abraham’s ears off. He was faster, stronger and smarter. Andre painted a masterpiece on a 20-by-20 canvas. It was his Mona Lisa.”

Shaw continued, “Andre went straight to the hospital after the fight where he gave his post-fight urine test to the Commission and spent three hours getting examined before being released early this morning. I’m very proud of Andre Dirrell. When his back was against the wall he fired back and against the leader of the Super Six World Boxing Classic.”

“I want to thank all my fans for their support and I especially want to thank everyone in Flint, Detroit and the surrounding areas as well as the entire Midwest for coming out on Saturday night,” said Dirrell. “I'm excited to have the chance to rest and relax with my family at home in Flint.”

The Abraham-Dirrell fight will be replayed tonight (Monday) at 10 p.m. ET / PT on Showtime 2.