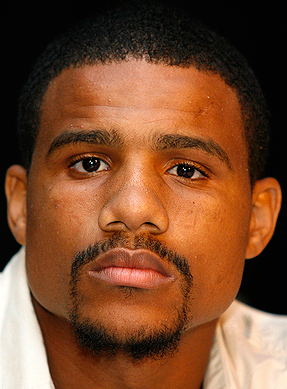 Arthur Abraham on the canvas against Andre Dirrell? Who would've predicted that? Photo / Tom Casino-Showtime

Andre Dirrell: Dirrell didn’t look like a winner after the bizarre ending to his fight against Arthur Abraham but the DQ shouldn’t obscure a special performance by the super middleweight from Flint, Mich. Dirrell, with only 19 pro fights under his belt, outclassed a then-unbeaten veteran with 31 fights who was among the favorites to win the Super Six World Boxing Classic. He outboxed, outworked and outsmarted Abraham, reducing the powerful Armenian to swinging wildly in a desperate attempt to salvage a victory. Dirrell will be very difficult for anyone to beat assuming he comes back 100 percent from the unfortunate 11th-round debacle. His uncle told the Flint Journal that tests showed no damage to his brain.

Arthur Abraham: The Germany-based Armenian lost his first fight in ugly fashion and then compounded the disaster with stupid comments in the ring. Not a good night. Dirrell demonstrated that Abraham could be dominated by a quick, athletic boxer with a good game plan. Abraham, considered one of the best fighters in the world going into the fight, looked remarkably ordinary. He also didn’t win any fans when he insisted it was no foul even after watching the replay and then suggested that Dirrell was acting and not really injured. He also suggested Dirrell might be on steroids because he was taken to the hospital before giving a urine sample. So much for Abraham becoming a star in the United States.

American success in Super Six: The experts predicted that Mikkel Kessler or Arthur Abraham would win the Super Six 168-pound tournament, with the young Americans Andre Ward and Andre Dirrell long shots because of their relative lack of experience. Sometimes talent is more important than experience, though. First, Ward schooled Kessler en route to an easy decision and then Dirrell was in the process of doing the same thing to Abraham until the 11th-round disqualification. We should’ve seen it coming. Plodding, stand-up Europeans have often had trouble with Americans who are particularly quick and athletic, especially when the Europeans have limited experience against such fighters. Ward and Dirrell have very unusual talent.

Super Six: The beauty of this is that great matchups just keep coming, even if we have to wait for a while. Next up: Carl Froch vs. Mikkel Kessler on April 24 in Herning, Denmark. After that: Andre Ward vs. Allan Green on June 19 in Oakland, Calif., to complete the second round of fights. I think Kessler finally hands the limited Froch his first setback, although the Englishman’s toughness and determination cannot be denied. And Ward is now my pick to win the tournament. The next round of fights are as follows: Ward vs. Dirrell, Froch vs. Abraham and Kessler vs. Green. And then it’s on to the semifinals. Isn’t this fun?

Marcos Maidana: The tough little Argentine isn’t the best boxer but does anybody care? He goes to war every time he steps into the ring and is one of the biggest punchers in the world pound for pound, as his 27 KOs in 28 victories suggest. I don’t put him in the same class as Timothy Bradley, Devon Alexander or Amir Khan in terms of talent but he would have a decent chance of beating any of the top 140 pounders because of his power. He broke down a more-talented Victor Ortiz last year and, on Saturday in Las Vegas, he did the same to Victor Cayo before ending the fight with a nasty body shot. And it’ll be fun to watch even if he loses. Andreas Kotelnik must be a pretty good, resilient boxer to have outpointed Maidana.

Maidana knockdown: Maidana put Cayo down with a blow to the back of his head a split second after the bell to end the second round yet was awarded a knockdown by referee Joe Cortez, which cost Cayo an extra point. What if the fight had gone the distance and Maidana won by a single point? This was one case in which an instant-replay review was warranted. Nevada officials, who have the option of doing so, could easily have reviewed it and ruled that the punch came after the bell and shouldn’t have counted. To be fair, the officials might’ve done exactly that after the fight.

Joan Guzman: The Dominican actually might’ve salvaged his career by pulling out a victory over Ali Funeka on the Marcos Maidana-Victor Cayo undercard. He didn’t look particularly good in his draw with Funeka in November, raising speculation that he would never be elite after moving from junior lightweight to lightweight. Then he comes in nine pounds overweight for the fight on Saturday. NINE POUNDS! That’s profoundly unprofessional. One wonders whether he had a significant edge because he didn’t have to taper down to 135 pounds as Funeka did. And it’s not the first time this has happened. His fight against Nate Campbell was canceled when he came in over the limit. The good news is that Guzman didn’t win the title and will have to pay Funeka 25 percent of his purse.

Ali Funeka: The tall, talented South African must not have the warmest feelings for North America, where his last three fights have taken place. He loses a disputed decision to Nate Campbell for a major title in Florida, draws with Joan Guzman in what seemed like a clear victory for the same title in Canada and then loses a legitimate split decision to Guzman in the rematch for the title after Guzman comes in nine pounds overweight. I hope he keeps at it because he’s bound to catch a break. He might even get another immediate shot at the same title, which remains vacant because Guzman didn’t make weight. One way or another, Funeka will win a major belt.

Pongsaklek Wonjongkam: The 32-year-old Thai fighter is 79 fights into his career and still winning titles. Some wondered whether Wonjongkam (75-3-1, 39 KOs) would rebound after losing his flyweight title to Daisuke Naito in 2007 and drawing with Naito the following year. However, on Saturday in Tokyo, he proved he has plenty left by outpointing then-unbeaten and extremely hot Koki Kameda to regain the 112-pound title. He might’ve clinched his place in the International Boxing Hall of Fame in the process. Wonjongkam lost two fights very early in his career, meaning he’s a remarkable 70-1-1 in his last 72 fights. It’s a shame Americans generally have to rely on internet videos to see him in action.

Abner Mares: The bantamweight contender, who beat journeyman Felipe Almanza on the Fight Night Club card on Thursday in Los Angeles, has to be one of the most-complete fighters in the world. I’ve rarely seen a fighter as aggressive as he is yet extremely effective defensively, meaning he can pound the you know what out of you and deftly avoid punches at the same time. The 2004 Mexican Olympian will fight good friend Yonnhy Perez for Perez’s title on the Israel Vazquez-Rafael Marquez card on May 22 at Staples Center. Perez is very tough but I don’t think he has enough talent to beat Mares, who went 2-1 against Perez in the amateurs.

David Haye vs. a Klitschko: The Klitschkos said they both want to fight the loquacious Briton, assuming he beats John Ruiz on Saturday. Let’s hope one of them actually does. The Ukrainian giants have made it abundantly clear that no one can compete with them. They’re too experienced, too big and too good. The only heavyweight given a chance to give them a challenge is Haye, who was scheduled to face both Klitschkos before the fights fell out. I think Haye would meet the same fate as the rest of the Klitschkos’ recent opponents. The promotion would be big, though, a throwback to the days when heavyweight title fights meant something. And it would undoubtedly be on TV in the U.S. Imagine that.