Maidana is most exciting of junior welterweight contenders 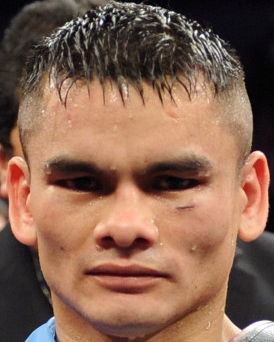 Marcos Maidana punishes Victor Cayo with a right cross en route to stopping the undefeated prospect in the sixth round of their entertaining junior welterweight bout at the Hard Rock Hotel & Casino in Las Vegas on Saturday. Maidana isn't the most talented 140-pound contender but he's the most fun to watch. Photo / Naoki Fukuda

Marcos Maidana does not have the level of technique and talent that his fellow 140-pound contenders possess but no discussion of marquee junior welterweight matchups is complete without the inclusion of the Argentine slugger.

There’s no doubt that young titleholders Timothy Bradley, Devon Alexander and Amir Khan are more skilled and athletic than Maidana, but in stopping Victor Cayo on Saturday, the rugged South American once again proved that his blend of toughness, power punching and pressure is enough to overwhelm the most gifted up-and-comers.

Maidana (28-1, 27 knockouts), who made his second successful appearance on HBO with his sixth-round KO of Cayo, has also proved to be must-see TV.

His attitude and style guarantees excitement for the fans and a lot of pain and punishment for his opponents, as Cayo (24-1, 16 KOs), an awkwardly elusive but gutsy prospect from the Dominican Republic, discovered.

Cayo, who was coming off a decision victory over former lightweight beltholder Julio Diaz, was able to repeatedly connect with looping punches delivered from odd angles as he stuck and moved about the ring but nothing he did could deter Maidana, who dropped him with a hook just as the bell sounded to end the second round.

Maidana landed the harder, straighter and more compact punches whether Cayo was moving away or boldly taking the fight to him, as he did in rounds four and five. However, although Cayo showed his mettle by trading with the harder puncher, he paid the price as Maidana ravaged him with an assortment of power shots until a hard right to the solar plexus in the sixth round sent him to the canvas for referee Joe Cortez’s 10 count.

The stoppage was somewhat reminiscent of Maidana’s first fight on HBO, which was also his American debut, a fight-of-the-year candidate with ballyhooed prospect Victor Ortiz last June. He got up from three knockdowns to batter Ortiz into submission in the sixth round of their thrilling shootout.

American fans have learned much about Maidana in his two fights on U.S. soil.

They know he has the heart and power to overcome a hard-punching technician like Ortiz. They know he’s savvy and relentless enough to figure out and overwhelm an unorthodox speedster like Cayo.

They’re pretty sure he’s formidable enough to compete with the likes of Bradley, Alexander and Khan. And they know he’ll make those fights worth watching.

If Maidana has trouble getting one of the 140-pound beltholders to fight him, perhaps he can settle for a junior welterweight showdown with Joan Guzman, who won his lightweight title rematch with Ali Funkea in Saturday’s co-featured bout but didn’t do so as a 135-pounder.

Guzman, who won a close split decision over the rangy South African in the opening bout of HBO’s Boxing After Dark broadcast, tipped the scales at a ridiculous 144 pounds at Friday’s weighin, nine pounds over the lightweight limit.

Funeka (30-3-3, 25 KOs) received 25 percent of Guzman’s purse per Nevada State Athletic Commission rules and the vacant title belt that was on the line could only be won by the 6-foot-1 contender, who weighed in at 135 pounds on Friday. But most observers believe the unbeaten Dominican got away with breaking (or at least bending) the rules Saturday night.

The rematch with Funeka wasn’t the first time Guzman (30-0-1, 17 KOs) has failed to make weight for a lightweight title bout. The slick veteran weighed in at 138 pounds for his shot at then unified beltholder Nate Campbell in September of 2008. That fight was canceled when Guzman claimed that he couldn’t get down to 135 pounds.

Guzman made the lightweight limit for his first bout with Funeka last November but didn’t exhibit the smooth footwork and quick reflexes that guided him to titles at 122 and 130 pounds. For much of that bout Guzman was a sitting duck for Funeka’s constant punches, which bloodied his face and repeatedly wobbled him down the stretch of the 12 rounder. Just about everyone who saw the fight believed Funeka won, but two judges scored it a draw resulting in an unpopular majority draw verdict.

Guzman, who won the split decision 116-111, 114-113 and 113-114, fought a much better fight on Saturday. He stuck and moved effectively, making Funeka miss and countering his towering antagonist with body shots and overhand rights.

Funeka outworked the Dominican in rounds three, four and five, but in the sixth, shortly after getting his nose busted, Guzman connected with an overhand right to the temple that dropped the South African.

From that point on, though Funeka was a game aggressor, Guzman appeared to be the boxer in control of the fight.

Unlike their first bout, Guzman was able to take Funeka’s best shots without being stunned. His punches were harder and he moved with confidence and fluidity.

The question that must be asked is would Guzman have been as strong and effective if he had to drain his body — as Funeka did — to make the contracted weight of 135 pounds?

Hopefully, Funeka will receive a fourth shot at a lightweight title.

The 32-year-old contender is 0-2-1 in his three 135-pound title bouts, which have all taken place in North America, but all three setbacks have asterisks by them.

His first shot, versus Campbell last February, was a majority decision loss to the veteran, who weighed in at 137¾ pounds. His second shot was the controversial draw to Guzman. His third shot was against a welterweight version of Guzman.

Campbell moved to the 140-pound division after failing to make weight against Funeka. Guzman needs to do the same.