Trainers of Jones and Hopkins say rematch will be different 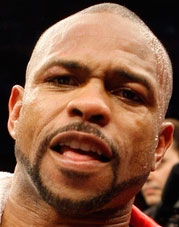 Ask 10 fight fans if they are excited about the April 3 rematch between Bernard Hopkins and Roy Jones Jr. and eight will probably tell you they’re not even paying attention to it.

However, most will admit they would have been into the rematch had it taken place at least six years ago, before Jones began his dramatic slide from his pound-for-pound perch.

Even Alton Merkerson, Jones’ longtime coach, feels this way and said so on a Wednesday conference call with Hopkins’ trainer Naazim Richardson.

“As a coach, I would have liked to see the rematch happen eight years ago,” Merkerson said. “Both guys were experienced but closer to their primes.”

However, one thing that can be disputed is whether or not the matchup between the two titans would have been a good fight.

Lost in the 17 years since they last met in the ring is the fact that their first bout, which Jones won by unanimous scores of 116-112, was a rather uneventful 12-round affair.

Veteran insider Bobby Goodman, who was on the conference call as a representative of Jones’ promotional company, was present at the first fight, which took place in 1993 at RFK Stadium in Washington, D.C.

The hall-of-fame matchmaker described Jones-Hopkins I as a matchup of “two extremely talented fighters who had great respect for each other and were just coming into their own.

“Bernard tried to press the action but Roy’s hand speed was a little more than Bernard’s,” Goodman continued.

“It was a very technical fight,” recalled Merkerson, who worked Jones’ corner for the fight. “We got Bernard frustrated in that fight by keeping him at the end of the jab.”

In other words, Hopkins was an ineffective aggressor for most of the fight and Jones was not willing to engage much with the Philadelphia tough guy. Tony Zale-Rocky Graziano it wasn’t. It didn’t even come close to Jermain Taylor-Kelly Pavlik in terms of action and drama.

However, the trainers of the future first-ballot hall of famers reminded media members on Wednesday’s call not to expect the same fight when Hopkins and Jones do it again at the Mandalay Bay in Las Vegas.

“They’re not the same fighters,” Richardson said. “You have to reinvent yourself to stay in the game as long as these guys have.”

Merkerson said Jones is more of a thinking fighter now than he was in the 1990s and the early part of the last decade, when he dominated opponents with other-worldly speed, power and reflexes. But he’s quick to add that it was more than fast hands and feet that befuddled Hopkins in their first fight.

“It was his physical ability (that outclassed Hopkins) but it was more his ability to think,” he said. “He capitalized on Bernard’s mistakes and Bernard couldn’t adjust.”

Richardson said that Hopkins has evolved into a fighter who makes very few mistakes and is now a master at adapting to his foes.

“Bernard was a seek-and-destroy guy (when he fought Jones),” he said. “He was overly aggressive and Roy took advantage of it. Now he’s about detecting flaws and weakness in his opponents and gradually taking them apart to the point that they’re never the same after the fight.”

Both fighters are indeed smarter but they’re also older. Hopkins, who is 45, has aged a lot better than Jones, who is 41 and coming off a first-round knockout loss to Danny Green in December.

Prior to that humiliation, Jones had gone 4-4 in his previous eight bouts, including brutal back-to-back knockout losses to Antonio Tarver and Glen Johnson in 2004.

The line of thinking among skeptical fans who plan to skip the April 3 pay-per-view broadcast is that “older is not better.”

Other fans, particularly those who have followed the sport for a few decades, believe that aging fighters — especially rivals — can often put on as entertaining a show as they did when they were in their athletic primes.

The fans who plan to buy the pay-per-view show also believe that great fighters, even those on the downslide, always have one last great performance in them.

They point to the exciting rematch between Sugar Ray Leonard and Thomas Hearns, which took place nine years after their classic first encounter, and they bring up how the “Thrilla in Manila” was the most savage and dramatic of Muhammad Ali and Joe Frazier’s legendary trilogy.

Amateur historians will recall that Hearns was coming off a shaky majority-decision victory over unheralded James Kinchen, who dropped him in the fourth round of a tough fight, prior to fighting Leonard again. Prior to the Kinchen fight, Hearns was knocked out by huge underdog Iran Barkley. Frazier was 3-2 in his previous five bouts, including a devastating KO to George Foreman, going into his third match with Ali.

And yet both Hearns and Fraizer gave their arch rivals hell in those now-legendary return matches.

Of course, Ali and Frazier and Leonard and Hearns matched up well stylistically speaking.

The $50 question is how well an old Hopkins and a faded Jones match up.

Fans shouldn’t expect a war but Merkerson believes the rematch will be a better fight than the first one.

“Both guys might be defensive starting out but it will heat up as the fight goes on,” he said. “There’s a lot of pride at stake and both men are taking this fight very seriously. Jones is working as hard as he ever has because he knows that Bernard is really working hard for this.”

Richardson expects a much-sharper version of Jones than the one who lost to Green, Tarver and Johnson.

“We’re not taking anything for granted. He’s still an exceptional talent and the man is desperate. A desperate man is dangerous.”

And one thing that hasn’t changed about each fighter, even after 17 years, is their competitive nature.

“We’re in the last chapter of this book,” Merkerson said. “Both men have made history. They’re not trying to prove anything to anybody. It’s about self-satisfaction now.

“It boils down to Bernard saying ‘You can’t whup me now’ and Roy saying ‘Yes I can.'”