Mike Jones ready for Bruseles and beyond 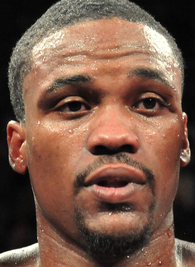 It’s simple cause and effect. Cause: Manny Pacquiao and Floyd Mayweather walk away from the richest fight in history. Effect: Mike Jones’ breakthrough opportunity slips through his fingers.

You’re probably asking yourself two questions right now: First, what does one thing have to do with the other? And second, who the heck is Mike Jones?

Answering the second question first, Jones is an undefeated Philadelphia welterweight who has enjoyed barely 15 seconds of his 15 minutes of fame so far, thanks to the fact that only a handful of his 19 fights have been televised. There was an eight-rounder on ESPN and a couple of Telefutura bouts, but otherwise, it’s been all $5.99 Internet broadcasts and handheld-camera-in-the-crowd videos on YouTube. But along the way, Jones has collected considerable buzz, much of it as backlash to the fact that he’s been unable to land a ShoBox date or an opening slot on Boxing After Dark. He’s that underexposed, under-hyped talent about whom several writers have made a point of publicly asking, “Why won’t HBO or Showtime give him a chance?”

Now for the answer to the second question. HBO was seriously considering giving him that chance. According to Jones’ co-manager Doc Nowicki, back in December/January a fight between Jones and Joshua Clottey was “just about made” as the co-feature to Kelly Pavlik’s April fight (which turned out to be against Sergio Martinez). It was an enormous step up from the Juliano Ramoses and Dairo Esaleses of the world, but it was a leap that Jones and his team believed he was ready for, with the knowledge that a win over Clottey would instantly make Jones a contender with name value in boxing’s most star-studded division.

But on Jan. 6, Pacquiao declared the Mayweather fight dead, and on Jan. 8, Top Rank announced that Pac-Man would be fighting Clottey instead. You certainly couldn’t blame Clottey for walking away from a dangerous fight against a complete unknown in favor of a seven-figure pay-per-view payday. But you had to feel bad for Jones, who was left doing exactly what he’d been doing the past couple of years: waiting. Waiting for a chance to make some money. Waiting for a chance to prove what he’s capable of.

He can do a bit of the latter this Saturday at Bally’s in Atlantic City, when he takes on Henry Bruseles in a 10-rounder. The fight will take place in front of a sell-out crowd of approximately 1,500 and will be televised nationally by Fox Sports Net and Fox Sports Espanol. So Jones should have plenty of eyeballs watching him try to justify the underground hype.

And Puerto Rican veteran Bruseles certainly qualifies as a meaningful measuring stick. Bruseles once got the HBO exposure that has thus far eluded Jones, losing to Floyd Mayweather via eighth-round stoppage in a junior welterweight fight in 2005, and since then he’s tallied seven straight wins, including decisions over the likes of Cesar Bazan and Ben Tackie. It’s debatable whether Bruseles is really a welterweight ÔÇö he made 140 pounds two fights ago against Tackie ÔÇö and he’s giving away four inches in height to the 5-foot-11 Jones. But he’s still more or less in his prime at 29 years of age and his resume surpasses that of anyone Jones has fought so far.

“I know he’s a tough guy, he beat Ben Tackie,” Jones said. “And Floyd’s one of the best, so no shame in losing to him. Stylistically, I expect him to keep his hands up good, and he’s a shorter guy, so he’s going to try to get on the inside of my jab. Basically, I want to keep him on the end of my shots, keep him turning, and outbox him.”

So does Jones consider Bruseles the toughest adversary of his four-year pro career?

In preparation for the fight, Jones kissed his two young daughters goodbye, left his home in the Frankfurt section of Philadelphia and relocated for six weeks to the nearby suburb of Newtown. His whole life for those six weeks is nothing but hardcore training ÔÇö and Jones wouldn’t have it any other way.

“He’s the definition of the term ‘gym rat,'” said running coach John Howell. “We have to hold him back sometimes.”

“There’s a river nearby,” said co-manager Jimmy Williams, “and there’s a running loop about four miles long along the river. Normally, an in-condition fighter will do it in 28 minutes. The first time we took him over there, he just went out and did it in 21 minutes.”

Howell picks Jones up at his hotel room in Newtown every morning around 7:00 and takes him for a five-mile run. Jones goes back to the hotel, has breakfast, rests, then goes to the Rock Hard Fitness & Boxing Club in nearby Fairless Hills, Pennsylvania, for two to three hours of boxing work with head trainer Vaughn Jackson. Then he rests for a bit before heading over to the Newtown Athletic Club for two hours of swimming and weights. And if that’s not enough to satisfy Jones’ need for exercise, he often sneaks in a spinning class or some other bonus cardio at the NAC.

RingTV.com went to Rock Hard Fitness last Thursday to observe Jones’ final day of sparring prior to the Bruseles fight. Earlier in training, he sparred with such recognizable names as Demetrius Hopkins and Derek “Pooh” Ennis. For this session, Jones’ opponents were Julias Edmonds, a junior welterweight with a 5-6 (0) pro record, and Miguel Corsino, a 1-0 (1) welterweight prospect.

After conducting a sit-down interview with local reporter Derrick Gunn of Comcast SportsNet (the Philadelphia station that carries Fox Sports Net fights and will televise the Bruseles fight in Jones’ hometown), Jones put in six rounds against Edmonds and four against Corsino, with just 30-second breaks between each round. The dedication to conditioning that his team bragged about was evident; at no point was Jones breathing hard.

Edmonds didn’t really have the tools to trouble Jones, but he was game and applied pressure as best he could. For the most part, though, Jones was able to toy with him, letting Edmonds ÔÇö who’s listed at 5’8″ but looked to be about six inches shorter than Jones ÔÇö crowd him but never land anything of substance. One round, Jones almost exclusively played defense. Another round, he concentrated on firing a busy jab and keeping Edmonds on the end of it. Another round, he fought as a southpaw.

When Corsino stepped in the ring, it immediately looked more like a real fight. They fought at a distance and both men were letting serious power punches go. Corsino was shifty and clever on his feet, forcing Jones to think and to perform ÔÇö which the lanky Philly bomber did rather impressively. In their third round, Jones hurt Corsino with a body shot, prompting a pause in the action while everyone made sure Corsino was all right to continue.

During the training session, RingTV.com asked Nowicki and Williams, “Is it fair to assume Mike hasn’t been a financially profitable investment for you yet?” The response was mixture of laughter and nodding.

“No, it hasn’t been profitable at all,” Nowicki said. “But when the big one happens, we’re all there.”

The question is, when will the big one happen? Even getting the medium ones to happen hasn’t been easy, as evidenced by the repeated attempts to schedule a fight with Larry Mosley in 2009. First Mosley pulled out with an injury on short notice, and then when it was rescheduled, Jones injured his biceps and had to pull out on short notice.

“The Larry Mosley fight just wasn’t ever meant to happen, you know?” Jones said. “I believe in things being meant to happen, and if you put your hard work in, your time will come. When it’s time for me to shine, I’m going to shine.”

It’s simple cause and effect. Cause: Jones gives a performance against Bruseles that forces the boxing world to take notice. Effect: His “time to shine” stops being some hypothetical part of his future and instead becomes a very real part of his present.

ÔÇó If you heard last week’s episode of RING Theory, you know that I specifically said I had no intention of watching Mike Jones train, even though the gym is just a few miles from my home, because I’m too lazy. So what changed my mind? Let’s just say it’s hard coming up with something to write about week after week, especially when the boxing calendar is as light on major matchups as it has been so far this year.

ÔÇó If you believe Shawn Porter won every single round against Russell Jordan on Friday Night Fights, then you also probably believe Tiger Woods’ list of regrets extends beyond getting caught. We can go ahead and add Eugene Glenn to that ever-growing list of judges who should never again be allowed within 50 feet of a pencil.

ÔÇó I was glad to hear Giovani Segura call out Ivan Calderon after turning away Walter Tello on Saturday night. You won’t find a better pure puncher vs. pure boxer matchup than this, and it would be for THE RING championship at 108 pounds. Not a bad replacement for Calderon vs. Brian Viloria if you ask me.

ÔÇó Maybe this was intentional as an advertisement for the product, but did anyone else notice that, on Saturday’s Fox Sports Espanol show, the two Tecate girls both had beer bellies? Maybe I shouldn’t criticize because I’m not exactly sporting six-pack abs myself these days ÔÇª but then again, I’m not parading around on television in just a sports bra.

ÔÇó After watching Omar Chavez blast out Eugenio Lopez, I have to ask: How do you spend your entire childhood in Julio Cesar Chavez’s house and end up with sloppy boxing technique?

ÔÇó Note to the folks at Fox Sports Espanol: If you want to cover the bottom third of the screen with advertisements for upcoming programs, try to do it when the tale-of-the-tape graphic isn’t on the screen.

ÔÇó Has there ever been a more appropriately surnamed boxer than Adrian Young? Jeez, Christy Martin could grow a better mustache than that kid. I could have sworn I was looking at my own ninth-grade school picture, minus the braces and mullet.