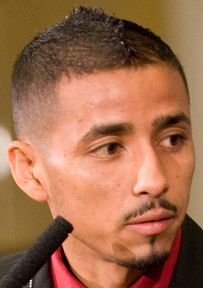 WILLIAM GONZALEZ vs. JESUS VAZQUEZ
Rounds / weight class: 12 rounds / bantamweights
Location: Miami
Television: Telemundo
The backdrop: Gonzalez, a tall, rangy southpaw, is hoping to work his way toward another title shot after losing a majority decision to then-bantamweight titleholder Joseph Agbeko in 2008. The Nicaraguan (23-3, 20 KOs) has power – as his KO ratio indicates – but he also can box. He’s a complete fighter. Vazquez (19-3-1, 17 KOs) also appears to have some pop but the Mexican is only 2-2 in his last four fights against journeymen. He doesn’t seem to be in Gonzalez’s class.
Also fighting: Clarence “Bones” Adams vs. Edel Ruiz, 12 rounds, featherweights
Rating the card: C+. Gonzalez and Vazquez can both punch, which is a plus. However, Vazquez probably won’t provide too much resistance. Adams, a former titleholder, is fun to watch.

SHAWN PORTER vs. RUSSELL JORDAN
Rounds / weight class: 12 rounds / junior middleweights
Location: Cleveland
Television: ESPN2
The backdrop: Porter (12-0, 10 KOs) probably is a titleholder in the making. The former U.S. Olympic alternate from Akron, Ohio, is short (5-7) and powerful with good boxing and athletic skills. Jordan (15-6, 10 KOs) is a 6-2 southpaw with some ability. However, he’s 3-4 in his last seven fights and hasn’t been in the ring in 16-plus months. He was stopped in his two biggest fights, to Luis Collazo and Sergio Martinez. He’ll probably suffer the same fate on Friday night.
Also fighting: Lanard Lane vs. Martin Tucker, 8 rounds, welterweights
Rating the card: B-. It’s always fun to watch a rising prospect like Porter. And the size difference – seven inches in height – adds an intriguing element.

GIOVANNI SEGURA vs. WALTER TELLO
Rounds / weight class: 12 rounds / junior flyweights
Location: Acapulco, Mexico
Television: Fox Sports Net and Fox Sports en Espanol
The backdrop: Segura (21-1-1, 17 KOs) didn’t start boxing until he was 19 and his rough-edged skills show it. However, the 108-pound titleholder from the L.A. area was born with the ability to crack, as he demonstrated in the past year. He stopped legitimate contenders Cesar Canchila, Juanito Rubilar and Sonny Boy Jaro in his last three fights. And Segura is only getting better. Tello (14-3, 6 KOs) has fought outside his native Panama only once and is 3-2 in his last five fights. He probably has some ability but is overmatched in this one.
Also fighting: Urbano Antillon vs. Luis Arceo, 10 rounds, lightweights
Rating the card: C +. This is a stay-busy fight for Segura but a fighter with his power is very entertaining. Don’t look away. Antillon hasn’t fought since he was KO’d by Miguel Acosta in July.