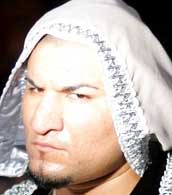 The anticipated heavyweight matchup between contender Chris Arreola and former cruiserweight champ Tomasz Adamek will take place on April 24, according to members of Arreola's team.

The fight, which will be the main event of an HBO Boxing After Dark broadcast, will be officially announced on Friday, according to a press release from Goossen Tutor, Arreola's promoter.

Arreola (28-1, 25 knockouts), who lives in nearby Riverside, Calif., is coming off a fourth-round TKO of Brian Minto in December. The L.A. native was stopped by THE RING's No. 1-rated heavyweight, Vitali Klitschko, after 10 rounds last September.

Adamek (40-1, 27 KOs), a former light heavyweight titleholder from Poland, won THE RING world cruiserweight championship in December of 2008. The New Jersey-based Pole made two defenses of his cruiserweight title before venturing into the heavyweight division, where he scored a fifth-round TKO of Andrew Golota last October and outpointed fringe contender Jason Estrada over 12 rounds on Feb. 6.

“It's going to be a fun fight for the fans,” Arreola's trainer, Henry Ramirez, told RingTV.com. “Adamek is a veteran who can box but he also likes to fight. Chris is already in training and he's starting this camp at the same weight he fought Minto at, so he's going to be ready.”

An interesting note about Arreola-Adamek is that it falls on the new date of the Andre Ward-Allan Green super middleweight title bout, which will take place in Oakland, Calif., and is part of Showtime's Super Six World Boxing Classic tournament. Ward is also promoted by Goossen Tutor, which means company president Dan Goossen will have to make a choice as to which event he personally attends.

“The Citizen's Business Bank Arena is right by the Ontario Airport,” Ramirez joked. “Depending on when the main events start, maybe Dan can get on a private jet and make both fights.”