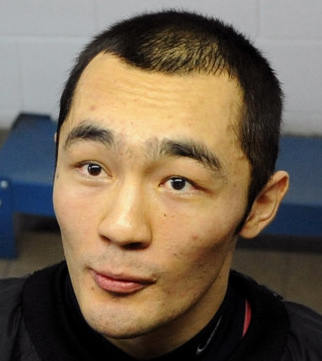 Self-promoted light heavyweight Beibut Shumenov shadowboxes in preparation for his rematch with beltholder Gabriel Campillo in a Fox Sports Net-televised main event from Las Vegas on Friday. Shumenov, who challenged for Campillo's title in only his ninth pro bout, dropped a close majority decision to the Spaniard last year. Photo / Naoki Fukuda

Boxing fans with TiVO and DVR will be using the digital video recorders on Friday as the sport will be featured on four cable networks.

Here's a look at the major bouts on all four shows appearing on Fox Sports Net, ESPN2, Showtime and Telemundo:

The two 175 pounders are not well known to American audiences but both are talented and worthy of attention. Campillo, a 31-year-old Spaniard fighting in the U.S. for the first time, is a capable southpaw with a classic stand-up boxing style predicated on a busy jab. Shumenov, 26-year-old native of Kazakhstan who now resides in Las Vegas, is a 2004 Olympian who defeated two former titleholders in his first eight pro bouts before fighting Campillo to a close, majority decision in his ninth pro bout.

The two are engaging in an immediate rematch and the clash of styles, Shumenov has an athletic-but-unorthodox approach to boxing, should make for another nip-and-tuck 12-round battle.

The fight could turn out to be an ugly one. Brewer, of Lawton, Okla., can be very awkward when he wants to be, and Lara, a former Cuban amateur standout, has been known to box safety first at times. However, the bout is significant because Brewer figures to test the talented 26-year-old southpaw.

Brewer is 39 years old but the journeyman-turned-fringe contender is on a four-year, eight-bout win streak that includes a second-round stoppage of previously undefeated Albert Onolunose (18-0) in his last fight.

Should the Lara-Brewer bout end early, undefeated welterweight prospect Jessie Vargas (7-0, 3 KOs), a Las Vegas-based Mexican national who some compare to a young Antonio Margarito, will be featured in a four-round swing bout against Rickey Kinney (3-1, 2 KOs), of Baton Rouge, La.

Brinkely, of Yerington, Nev., is best known for his participation on the first season of The Contender reality series but the 33-year-old vet has quietly raked up eight consecutive victories dating back to mid-2007, often fighting in front of energized crowds in Reno.

Brinkley’s performances have been hot and cold depending on the shape he’s come in. He looked sharp battering fellow first season of The Contender alum Joey Gilbert en route to a one-sided 12-round decision last February, but he was overweight and sluggish in a 10-round decision over light heavyweight Mike Paschall last July.

Stevens, only 24, has only fought four times since losing a one-sided 10-round snoozer to Andre Dirrell in a forgettable track meet two and half years ago. The heavy handed New Yorker looked vulnerable while going life-and-death with spoiler Dan Mouton in a close eight-round win last April, but he appeared formidable in stopping then-undefeated (22-0) prospect Piotr Wilczewski in three rounds last July.

Brinkley is by far the most experienced fighter Stevens has faced in his 5¾-year pro career. The 12 rounder, which is a title eliminator for one of the sanctioning organizations, should be a good one. It will be interesting to see if Stevens can hurt Brinkley with his vaunted power and if the younger man has the stamina to last the distance with the battle-tested veteran.

The best news about Showtime’s ShoBox telecast from Albuquerque, N.M., is that beloved commentator Nick Charles, who took a leave of absence from the broadcasts to battle bladder cancer, which is now mostly in remission, is returning to the show he’s co-hosted with Steve Farhood since its inception in 2001.

However, the 10-round main event between undefeated bantamweight prospect Chris Avalos (14-0, 11 KOs) and Jose Nieves (17-1-3, 8 KOs) is certainly worth mentioning.

Avalos, a 20-year-old boxer-puncher from Lancaster, Calif., is taking a huge step up in competition with Nieves, a 29-year-old southpaw from Carolina, Puerto Rico, who was fighting in 10-round bouts more than two years before the young prospect turned pro.

Melendez, an aggressive 30-year-old southpaw, dropped Fernando Montiel before being stopped in the 12th round of a spirited 115-pound title challenge in October of 2007. However, who knows where the Colombian’s head is after his 10-round loss to Z Gorres last November nearly resulted in the Filipino veteran’s death.

Melendez and Gorres went toe to toe for much of their fight until the Colombian dropped the Filipino lefty in final round. Gorres got up and won the bout on points but then collapsed in his corner and was rushed to a hospital where he was put into a medically induced coma in order to treat a subdural hematoma he suffered during the bout. Gorres eventually regained consciousness and is expected to make a full recovery but the fight must weigh heavily on Melendez’s heart.

Will he be able to let his hands go against the hard-punching young Ruiz?

Arce is only 30 but the little warrior turned pro when he was 15 and he has many brutal extended slugfests among his 59 pro bouts, perhaps too many. Arce took a frightful beating during an 11th-round TKO loss to hard-punching 115-pound king Vic Darchinyan last February and the Los Mochis, Mexico native did not appear to have his legs or reflexes in a one-sided 12-round decision loss to South Africa’s Simphiwe Nongqayi last September.

Who knows what the heavily tattooed Angkota brings to the table? One thing is for certain, the 28-year-old boxer-puncher did not had it easy on his way to the top. He was put in with future 105-pound titleholder (then 39-5-2) Muhammad Rachman in only his second pro bout back in 2001. The poor kid was smashed in one round as could be expected.

However, Angkota went on to win more fights than he lost, including 10-round decisions over former and future 105-pound titleholders Joma Gamboa and Donnie Nietes in 2004. He hasn’t been knocked out since that first-round KO in his second pro bout, so he doesn’t appear to be soft touch for Arce.