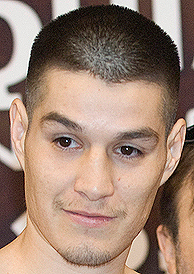 Dioniso Miranda fought Roman Karmazin on even terms until the 10th round, when he was put down twice and stopped. Photo / Miriam Preissel

GLENDALE, Calif. — Roman Karmazin was in deep trouble in the third round after Dionisio Miranda rocked him with a huge right. At that moment, at 37 and feeling old, he was faced with the end of his long career.

If he could survive and somehow win, he would continue his quest to win a second major title. If Miranda could finish the job – and was oh so close to doing so – he knew even in a daze that he was through.

Well, Karmazin wasn’t ready to find new work. He survived not only that episode but a harrowing knockdown in Round 9 before stunning a pro-Karmazin crowd by stopping Miranda at 2:34 of the 10th round in a middleweight title eliminator.

Karmazin is in line to challenge for Sebastian Sylvester’s belt.

“I gave my kids my word that I’d win the fight,” Karmazin said through an interpreter when asked how he survived the third-round crisis. “And I don’t want to quit boxing; I don’t want to retire. If I lost that fight, I knew I’d have to retire because I’m 37.

“I want to stay in boxing. I couldn’t lose.”

For a while, it appeared he couldn’t win.

Karmazin, a native of Russia who trains in Los Angeles, decided in pre-fight preparation that Miranda (20-5-2, 18 knockouts) was a one-dimensional fighter – big right hand but not much else – and would simply outbox him.

Once the opening bell rang, though, he realized he miscalculated. The Columbian has a good jab and boxes well, in addition to a lethal right.

By the third round, Karmazin (40-3-1, 26 KOs) thought he was beginning to figure out the Miami-based Colombian and then ÔÇª BAM! The right buckled the Russian’s knees and made his eyes glassy early in the round.

“He really shook me. It was difficult coming out of it,” Karmazin said in his dressing room.

As his children and desire to continue boxing raced through his mind, he clutched, he bobbed, he punched back some – anything to avoid that coup de grace and regain his composure. And somehow he was standing when the bell rang to end the round.

He walked back to his corner and trainer Freddie Roach on unstable legs as the crowd sighed in relief.

“He was hurt bad,” Roach said. “He was so wobbly when he came to corner after the round. I was worried.”

The fight was close from then on even with the ninth-round knockdown, the result of another big right that also hurt Karmazin. Two judges had it 85-85 after nine rounds and the third had Miranda leading 87-84.

That didn’t matter, though. With about a minute remaining in the 10th ground, Karmazin put Miranda down with a combination – he wasn’t sure what punch did the most damage – and then pounded the Colombian into the canvas to end the fight.

The fans at the Glendale Civic Auditorium, many of whom spoke Russian, leaped to their feet and cheered wildly as Karmazin – well aware that he’d survived a war – simply smiled broadly.

And why not? Just like that, he turned what appeared to be a career-ending loss into a spectacular – and important – victory. The only thing that he lamented was that his kids didn’t see it because it wasn't on television back home St. Petersburg.

“I don’t even know what got him,” a beaming Karmazin said. “It wasn’t a big punch. After he went down, though, then I got him real good.”

Roach was effusive in his praise afterward.

“I’m very proud of Roman,” he said. “He was caught and hurt but he survived. He showed us what kind of fighter he is. He has a lot of balls.”