Espino is ready to answer ‘the call’ against Pavlik 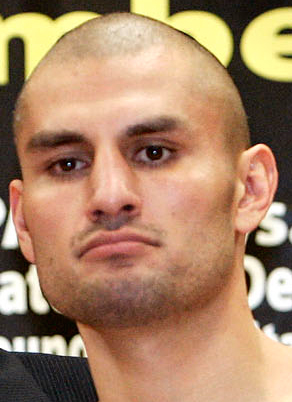 Miguel Espino (left) and his trainer John Bray (right) have been together since the start of his career. Bray, a former amateur star, has taught Espino all he knows but the 29-year-old fighter, who cares for his legally blind mother, has qualities that can't be learned in the gym. Espino will need all of his character and experience when he challenges heavy favorite Kelly Pavlik for the middleweight title this Saturday. Photo / Chris Farina-Top Rank

John Bray had a lot to say to Miguel Espino after his fighter stopped Alejandro Garcia in six rounds in March, all of it good.

Bray liked how Espino beat Garcia to the jab. He liked the constant pressure and the way his combinations came together, producing two knockdowns before the former 154-pound beltholder quit on his stool after the sixth round.

But Bray mixed in some advice with his praise.

“Stay ready and stay in the gym,” he told Espino, “this is the year you get the call.”

The call Bray spoke of is the call every promising young fighter dreams about. It’s the call that informs him of his title shot.

Espino (20-2-1, 9 knockouts) can be forgiven for not being as confident in Bray’s prediction as the trainer was.

The 29-year-old North Hollywood native has won 11 consecutive fights since his last loss, a close five-round decision to Peter Manfredo Jr. on The Contender back in 2004, but he’s been under the radar since taking part in the first season of the reality series. He has fought second- and third-tier fighters on club cards in hotel ballrooms, high school auditoriums, country clubs and armories.

Whatever casual fans he picked up during his brief appearance on the The Contnder (the Manfredo fight was his first and only bout on the show) have long forgotten about him.

It seemed as if the industry had forgotten about him, too.

After an active 2006 and 2007 — a span that included eight fights — Espino fought only once in 2008. Nobody called that year. His only bout this year was the Garcia fight, and with nothing scheduled on the horizon, there were no reason for him to believe his title shot would come in 2009.

However, the offer came in early November, and what an offer it was. Who would have thought that he would get an opportunity to challenge middleweight champ Kelly Pavlik in the final month of the year?

Certainly not Espino, who was in Culiacan, Mexico serving as a sparring partner for Julio Cesar Chavez Jr. when he got the call.

“The sparring with Junior was pretty easy,” Espino said. “They didn’t want me to go more than three rounds with him at a time, so I was just taking it easy, eating that good Mexican food and enjoying life when I got a call from Fernando Beltran.”

The Mexican promoter, who manages Chavez’s career in Mexico and works closely with Bob Arum’s Top Rank, which promotes Pavlik, told Espino that a Dec. 19 shot at the middleweight champ was his if he wanted it.

“I was in a restaurant, staring at a plate of tacos and an ice cold Coke when Beltran called,” Espino said. “I didn’t believe him when he gave me the news. Then Bob Arum spoke up.

“‘Hey kid, this is for real,'” Espino said, imitating the gravely voice of the hall-of-fame promoter, “‘you want it or not?’

One week later Espino was looking Pavlik in the eye at a Las Vegas press conference announcing their middleweight title bout, which takes place at the Beeghly Center in Pavlik’s hometown of Youngstown, Ohio, this Saturday.

Bray was practically giddy at the press conference but he maintains that he wasn’t surprised that Espino got a shot at the troubled middleweight champ.

“Did I think he’d get a shot at Pavlik when I told him the call would come earlier in the year?” Bray asked rhetorically. “No, of course not. But Miguel is an action fighter who doesn’t have many big names on his resume and he’s not a huge puncher, so I figured somebody would think he’s safe enough to pick him as an opponent. I was thinking it would be one of the German guys, Arthur Abraham or Felix Sturm.

“By the end of the year, though, after all the setbacks that Pavlik suffered, I wasn’t surprised at all that it was Kelly’s people who were making the call.”

Fans who know of Espino are happy that he’s getting the opportunity, but few give him much of a shot at taking advantage of it.

Bray obviously feels differently and he says the timing of Espino’s big break couldn’t be better. In fact, with all the recent drama in Pavlik’s life, he wonders whether the champ is ready for Espino.

Bray, a former amateur star and pro prospect, knows how much the first loss weighs on a young fighter’s mind, and Pavlik’s loss to Bernard Hopkins was in his words “a doozy.”

He knows how a nagging injury can disrupt a fighter’s momentum and shake his confidence. The Staph infection in Pavlik’s left hand resulted in the cancellation of two bouts, caused fans to question his heart and almost resulted in his death when he had a bad reaction to medication taken for the infection.

Bray has also read the internet rumors claiming that Pavlik checked into an alcohol rehabilitation center over the summer. He doesn’t know whether there’s any truth to the rumors, which were vehemently denied by Pavlik’s father and manager Cameron Dunkin, but he knows a little something about addiction. He knows it can ruin a career.

Drugs and alcohol helped run Bray’s pro career into the ground and probably contributed to the near-fatal stroke he suffered in 1999.

But Bray says Espino’s chances on Saturday have less to do with Pavlik’s personal problems and more to do with his fighter’s character.

“I came up with Shane Mosley in the amateurs,” Bray said. “I made the U.S. team in 1987. Shane made it in 1989. He never drank, never smoked, never chased women. He lived the good life, the clean life. Now here I am, 10 or 12 years retired, and Shane’s still fighting and winning on the world-class level. Now I’m not saying that Miguel has Shane Mosley’s talent. He doesn’t. He doesn’t have the talent that I had, but like Shane, he lives the way a fighter is supposed to. He lives clean and he stays in the gym. That’s why Miguel is a better pro than I ever was. He made a better transition from the amateurs than I did because he didn’t get caught up in the night life and drugs and all the crap that I did.

“He was more raw than I was when he turned pro, but he was more focused on his job. He was more disciplined. He was willing to work at his job and get better.”

Espino was the first fighter Bray trained after suffering his stroke. Bray was still recovering from it when he was introduced to Espino at Joe Goossen’s gym in Van Nuys, Calif., where he helped with the noted trainer’s fighters.

“Joe trained Miguel for his first fight in 2000, but he asked me to show him some things before his second pro bout,” Bray said. “Miguel looked at me — still half paralyzed, still slurring my words — and then he looked at Joe like, ‘What are you doing? This guy is a mess.’

“But we got along and I’ve trained him from his second fight on.”

Their nine-year journey to the title hasn’t been all roses. Bray’s expertise as a trainer and Espino’s confidence in him developed gradually as the 39-year-old Van Nuys native slowly rebounded from his stroke and former lifestyle.

“Miguel is a stubborn, proud kind of guy,” Bray said. “It probably took five years for me to gain his trust completely. Once I did, we really started to take off, and in that time I learned about what a special kid he is.”

Espino’s mother, 49-year-old Ana Garcia, suffers from retinitis pigmentosa, a genetic disease of progressive vision loss that has rendered her legally blind for most of the decade. He lives with her and he takes care of her, but he doesn’t like to talk about it.

In fact he’s been uncomfortable with the attention the media has given his relationship with his mother.

“I’m just doing what a son should do,” Espino said. “When she and my father divorced, I had to step up and be a man and take care of her. She always took care of me. Now it’s my turn. It’s not a big deal.”

“When boxing writers write about Miguel, he wants it to be for what he’s done in the ring,” Bray said. “He doesn’t want to be known for his mom and his story with her, but I always thought that was an incredible story because kids don’t do that any more. That’s what makes Miguel so special, but he doesn’t want people to feel sorry for him or his mom. That’s his pride. That’s his fighter’s pride.”

Espino started boxing when he was 12. He compiled a 90-10 record during his amateur career, which included a spot on the U.S. team from 1997 to 1999. He’s dedicated to the sport and obviously has strong character, which suggests that he’s not the “no-hoper” some fans have labeled him going into Saturday’s fight.

However, it’s his fighter’s pride that Bray spoke of that makes his title challenge, which is part of a dual-site Top Rank-produced pay-per-view show, worth the $39.95 price tag.

Espino is coming to fight.

Although he hasn’t fought since March, his mettle has been tested all year at the Fortune Gym in Hollywood, Calif., where he’s sparred with some of the best talent Southern California has to offer, including junior middleweight contender Alfredo Angluo, with whom he’s waged all-out gym war witon many occasions.

“He keeps on coming, that’s his game and he can get away with it because he can take a punch,” the 6-foot-4 Zugic said of his sparring sessions with Espino.

“I have every intention of making the most of this opportunity.” Espino said at Wednesday’s final press conference. “Kelly is tall, lanky and hits hard. The key for me is to stay focused throughout the fight, stay calm and stick to the game plan.”

The game plan is one that should make for a fun fight.

“The key to Miguel winning is to pressure Kelly, back him up,” Bray said at the final press conference. “I have watched every professional fight of Kelly's and know him as well as Miguel. I know his strengths and his weaknesses and there enough of them for Miguel to exploit. Miguel is a very good fighter with a huge heart. He's going to lay it all out on Saturday night.”

That’s exactly what a fighter should do when he gets the call.