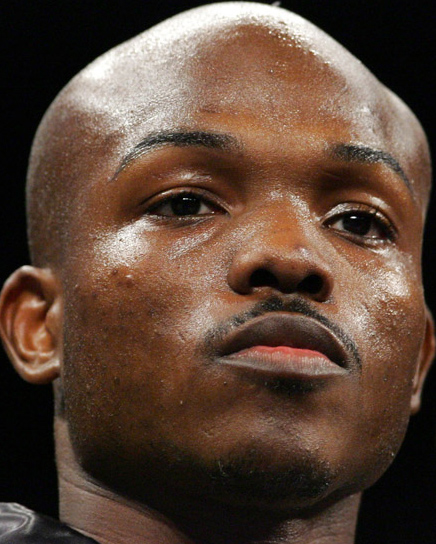 When THE RING's No. 1-rated junior welterweight Timothy Bradley (left) wasn't outboxing Lamont Peterson (right) from a distance during their 12-round title bout on Saturday, the two 140-pound standouts fought fiercely on the inside. Photo / Chris Farina-Top Rank

RANCHO MIRAGE, Calif. — Timothy Bradley is the best junior welterweight in the world.

He isn’t the champ. That distinction goes to Manny Pacquiao.

He isn’t the most popular or charismatic 140 pounder. Young guns Amir Khan and Victor Ortiz beat him out in that department.

He doesn't have the name recognition of some of the veterans of the division, such as titleholder Juan Urango and former beltholder Paul Malignaggi.

He isn’t the most exciting junior welterweight (although he isn’t boring by any stretch of the imagination). Slugger Marcos Maidana brings more action per round.

But for my money, Bradley is the man in the 140-pound division.

He proved it this year by outlasting Kendall Holt in April, by overwhelming Nate Campbell in August, and by outboxing Lamont Peterson to a 12-round unanimous decision in front of an enthusiastic hometown crowd at the Agua Caliente Casino on Saturday.

Bradley had to fight and box his heart out against Peterson (27-1, 13 KOs), exhibiting a degree of footwork, counter-punching ability and ring generalship fans had never seen from the Palm Springs, Calif., native.

He says he knew it would be the toughest fight of his career.

“I don’t really get too nervous for my fights, but this was one I got nervous for,” Bradley said at the post-fight press conference. “I haven’t felt like that in a long time. I felt like I did for my first amateur fights because I knew I was fighting a guy who has a good team behind him, someone with skills, and I knew he was going to bring it.

“And he did. Those body shots he landed, ooh! Those were some good body shots. I planned to come out and press him and work his body but that’s what he did to me, so I had to change my gameplan and box him.

“It was without question the toughest fight of my career. It was a gut check. He made me fight, and he made me do things in there that I normally don’t do.”

Bradley is usually an aggressive boxer-puncher who pressures his opponents. Against Peterson — a taller, rangier technician with an amateur background as extensive as his — Bradley had no choice but to show the other sides of his talent.

After an even first round, Bradley utilized his superior hand speed to beat the taller man to the punch with lead and counter right hands while evading Peterson’s return fire by bobbing into a crouch, taking a few steps back or by circling to his left.

With a minute left in the third round, Bradley dropped Peterson with a sweeping right across the top of his head.

“That was a Shane Mosley right hook (that landed) right behind the ear,” Bradley said of the only knockdown of the fight. “It knocks off your equilibrium.”

It may have scrambled Peterson’s balance for a few seconds, but the 25-year-old challenger was up quick, stomping his feet hard on the canvas to let Bradley know that his legs were still under him.

Peterson proved it by matching Bradley’s follow-up attack, engaging in brutal infighting with the hometown fighter. Both landed hard punches to the head and body but Peterson’s shots to the midsection were particularly vicious.

Peterson’s best punches were his body shots as he relentlessly stalked the 26-year-old titleholder over the second half of the fight. He appeared to land more quality punches in the middle rounds of the bout, but he was no longer boxing, and Bradley took advantage of Peterson’s aggressive mindset down the stretch of the fight.

“I let my balls get the best of me,” Peterson said bluntly at the post-fight press conference. “After getting knocked down I abandoned my game plan. I really lost it in the third round. I got up and said to myself ‘It’s time to fight.’ I wanted to win the round back, but I got away from boxing and from my jab.”

Bradley was the quicker, more active fighter in the late rounds. He landed the cleaner punches as he utilized fluid in-and-out, side-to-side movement with pro-style pivoting in close. His flashy feet were as impressive as his fast hands during Saturday’s bout, his fourth title defense.

Bradley said he wanted to fight more on the inside but heeded the instructions of his trainer, Joel Diaz.

Peterson and his trainer Barry Hunter didn’t fault Bradley for his tactics. They lauded him for the versatility he showed, as did Peterson’s promoter Bob Arum.

“We fully expected Lamont to win tonight but he lost to a superb fighter in Tim Bradley,” Arum said.

Hunter said he and his team had respect for Bradley coming into the fight and even more so afterward.

“California, y’all should be proud of the champion you have,” Hunter said.

Bradley’s promoter Gary Shaw hopes Hunter and Arum aren’t the only folks who were impressed with Bradley. Shaw believes that Bradley hasn’t received the respect he deserves so far.

More fans and boxing writers probably agree with Shaw after the Peterson fight.

Bradley doesn’t pack big arenas or possess a “crossover star” personality, but with each victory he’s convincing the public of just how good he is.

The mission for Shaw, Bradley’s manager Cameron Dunkin and co-promoter Thompson Boxing is to get one of the more popular 140-pound standouts, like Khan or Ortiz, into the ring with their fighter.

Shaw believes a showdown with Khan, a talented young titleholder who is wildly popular in Britain, is a possibility.

“The fight that I’m looking to do is an Amir Khan fight,” Shaw said at the post-fight press conference. “Right after tonight’s fight, I got a call from the head of the WBO (the sanctioning organization that recognizes Bradley). He told me that Frank Warren (Khan’s promoter) called him tonight and said he wanted to make a fight between Khan and Bradley.

“I had some preliminary discussions with Warren and Showtime a few months ago and I think it’s a fight that might be able to get done. I have no problem taking Timothy to England to fight Khan in front of 40,000 screaming Brits. I don’t think that’s a hard fight for Timothy. I’m surprised Warren wants that fight.

“Khan’s been stretched before and I’m more than happy to have Timothy stretch him again.”

Khan’s trainer Freddie Roach told RingTV.com that he would be willing to put his young star in with Bradley sometime next year.

Richard Schaefer, CEO of Golden Boy Promotions, which represents Ortiz and Maidana, told RingTV.com that Bradley is a potential future opponent for both fighters.

Malignaggi, who soundly outpointed Juan Diaz in their rematch on Saturday, appears to have regained his form and confidence and would probably relish the opportunity to pit his experience and savvy against Bradley's versatility and enthusiasm.

So if you’re not convinced that Bradley is the best junior welterweight in the world, chances are good that he’ll get the opportunity to prove it in 2010.

Bradley is looking forward to doing just that.

Zappavigna (22-0, 15 KOs), Liverpool, Australia, won by unanimous scores of 60-54. Macias (14-19, 6 KOs), Pacoima, Calif., who absorbed almost every hook and cross launched by the muscular up-and-comer, didn’t fight back until the final round.

Some have compared Zappavigna to Kostya Tszyu because he’s from Australia and he wears the same pig tail, but the young man is nowhere near as polished as the former champ was at the same stage of his career.

Featherweight prospect Salvador Sanchez, the nephew of the late great champ of the same name, outworked Rodrigo Aranda to an eight-round majority decision.

Sanchez (18-3-2, 8 KOs), Tianguistenco, Mexico, won by scores of 60-54, 59-55 and 57-57. The skinny featherweight, who sports the same Mexi-fro that his uncle did, had trouble with the counter punching of Aranda (8-12-2, 2 KOs) in the early rounds, but his concentrated body attack gradually wore down the game Las Vegas-based journeyman. Sanchez took the fight to Aranda in the final two rounds.

Hernandez (27-1, 18 KOs), Mexico City, Mexico, won by scores of 78-74 (twice) and 80-72, which doesn’t reflect the good work that Navarez (7-9-1, 4 KOs), Chinandega, Nicaragua, did on the inside periodically during the fight. However, Hernandez outworked Navarez with a constant jab, that set up clean uppercuts and hooks.