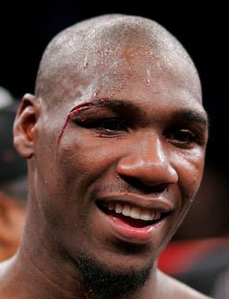 It’s a sports clich├® but the old saying “there were no losers” holds true for the Paul Williams-Sergio Martinez middleweight barnburner that took place Saturday in Atlantic City, N.J.

In fact, the savvy southpaw from Argentina earned respect among U.S. fans and gained ground in THE RING’s rankings, advancing from the magazine’s No. 4-rated junior middleweight to No. 1 in the 154-pound division, where the 34-year-old vet has fought for most of the decade.

Martinez’s promotion replaced Williams as the top dog in the junior middleweight division, a spot the 6-foot-3 windmill earned with an eighth-round stoppage of 154-pound beltholder Verno Philips last November.

However, Williams, who claims that he can still fight at welterweight, was also RING-rated at middleweight, where Saturday’s gutsy performance advanced him one notch, from No. 3 to No. 2.

“Paul Williams can probably still make 154 pounds, but the fact remains that he has not fought at that weight in more than 12 months,” said Nigel Collins, Editor-in-Chief of THE RING magazine. “Should he drop down to either junior middleweight or even welterweight in the future, his past work in those divisions will be taken into consideration when evaluating whether or not he should be again included in the either of those weight classes.”

The likelihood of Williams fighting at junior middleweight or welterweight again depends on the willingness of the top 154-pound and 147-pound contenders to face him.

Although Martinez made Williams look human, even vulnerable by literally teeing off on the towering southpaw in many rounds, fans shouldn’t hold their breath for other fighters to challenge the former welterweight titleholder.

If Williams never fights at the lower weights again, he can be proud of being RING-ranked either No. 1 or 2 in three divisions over the past three years.

Williams, the lone American in THE RING’s middleweight top five, may continue to have difficulty finding worthy opponents as his 160-pound peers are all European standouts who may not wish to leave the comfy confines of Germany and the UK.

And given the 28-year-old volume puncher’s strained history with Pavlik, it’s doubtful that fight will be back on in 2010.

Middleweight wasn’t the only division in the spotlight over the weekend. There was world-class action in other weight classes, which is reflected in this week’s RING ratings update.

Marco Huck (No. 5 last week) advances to No. 4 on the strength of his win over Ola Afolabi (No. 8 last week), who falls to No. 10. Huck’s move up also pushes down Giacobbe Fragomeni (No. 4 last week) to No. 5. Danny Green enters at No. 8 following his first-round TKO of Roy Jones Jr. The realignment also forces out BJ Flores (No. 10 last week).

Eduard Gutknecht enters at No. 10, thanks to his victory over Karoly Balzsay (No. 10 last week), who exits.

Williams (No. 3 last week) changes places with Sebastian Sylvester (No. 2 last week) following his outstanding bout with Martinez. Matthew Macklin (No. 6 last week) moves up to No. 5 after beating Rafael Pintos, bumping down David Lopez, who has been inactive since April 2009, to No. 6.

Williams (No. 1 last week) is now rated exclusively at middleweight because he has not fought at 154 pounds in more than a year. Martinez (No. 4 last week) jumps to No. 1 due to his extremely close loss to Williams at middleweight. Everybody rated No. 5 through No. 10 last week climbs one rung each, while Joachim Alcine returns at No. 10.

WELTERWEIGHTS: Carlos Quintana (No. 8 last week) is now campaigning at junior middleweight, but has yet to accomplish enough in that division to earn a ranking. Quintana’s departure allows Luis Collazo (No. 9 last week) and Isaac Hlatswayo (No. 10 last week) to advance one position each. Selcuk Aydim is new at No. 10.

Amir Khan’s one-round blowout of Dmitriy Salita moves Khan from No. 3 to No. 2, while inactive Ricky Hatton slips from No. 2 to No. 3.

Kevin Mitchell (No. 10 last week) departs because he now fights at lightweight. He is replaced by Ji Hoon Kim.