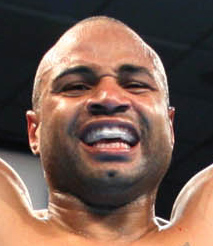 The Ring rating: No. 4 junior middleweight

Skills: It’s easy to tab Martinez as the “better-skilled” fighter in this matchup since the Argentine southpaw is a boxer by nature, a stick-and-move specialist who works everything — but mainly a fast straight left — off of his busy jab. Williams, on the other hand, is a volume-punching pressure fighter who is obviously offense minded. However, the towering southpaw has sharpened up his technique considerably since his breakthrough victory against Margarito and his lone loss to Quintana at welterweight. The junior middleweight/middleweight version of Williams possesses a sharp jab, arrow-straight left, compact right hook and even some head movement. And unlike Martinez, Williams has the ability to fight effectively on the inside.
Edge: Even

Power: Martinez has proven to have above average pop when he’s able to time his power shots just right as evidenced by the one-punch left-to-the-body shot KO he scored vs. Saul Roman and short left cross that should have resulted in a seventh-round knockout of Kermit Cintron, but he generally doesn’t sit on his punches. Williams usually wears his opponents down with volume punching and smothering pressure, however he’s shown one-punch KO power in his rematch with Quintana and his first middleweight bout vs. Andy Kolle (who was flattened by a single right hook). The hunch here is that Williams, who has proven power at 160 pounds, is the harder puncher.
Edge: Williams

Speed and athletic ability: Both Williams and Martinez are good athletes, however, the Argentine possesses better speed, agility, and hand-eye coordination.
Edge: Martinez

Defense: This is a tough category to assess because while Martinez is able to use his legs and quick reflexes to avoid incoming punches, he has the terrible habit of keeping both hands down around his waist. However, Williams, who does manage to keep his hands up, relies on a good offense to be his defense. The thought here is that Martinez has the edge in defensive prowess because he actually makes an effort to avoid getting hit, while Williams’ warrior nature sometimes gets the better of him.
Edge: Martinez

Experience: One would assume that Martinez, a 12-year veteran with almost 50 pro fights, is the lock in this department, but a look at both fighters’ records reveals that Williams has faced better opposition. Williams has fought five current or former titleholders — Wright, Margarito, Quintana, Phillips, and Mitchell — going 5-1 in six fights with this quality quintet. Martinez has faced two titleholders, Margarito (who stopped him early in is career) and Cintron (who held him to a draw).
Edge: Williams

Chin: Both men can take a solid shot, but Williams’ beard is more tested because of his aggressive style. Williams has never been down. Although Martinez appears to have a good chin, he was stopped by Margarito in 2000.
Edge: Williams

Conditioning: Both men are always in fantastic physical condition. Martinez has to be in order to move for 12 rounds; Williams must be in order to average 100 punches per round.
Edge: Even

Wear and tear: You would think that Williams’ aggressive style would lead to more wear and tear on his body but as his nickname suggests, he’s usually the one dolling out the punishment. Williams ended most of his fights within the first two or three rounds during the early years of his career. He wasn’t taken into the late rounds until he began fighting fellow prospects and contenders. Williams has fought eight rounds or more on only eight occasions. No so for Martinez, who is used to going the distance and putting “fighter’s mileage” on his legs. The Argentine boxer has fought eight rounds or more 19 times.
Edge: Williams

Outcome: Martinez’s fleet footwork and superior hand speed will enable him to land select power punches in the early rounds, but Williams will take them with little effect and gradually impose his greater size and punch output on the older, smaller man by the middle of the fight. As Williams stalks forward, working both hands and slowly cutting off the ring, Martinez’s offense will drop significantly. Martinez needs to have his feet planted before he gets off and Williams will not allow him to stand his ground for a moment without swarming him with body-head combinations. By the sixth and seventh rounds, Williams will begin to back Martinez into corners or the ropes and work the veteran over. Martinez won’t have an answer for the Punisher’s relentless pressure and volume punching.