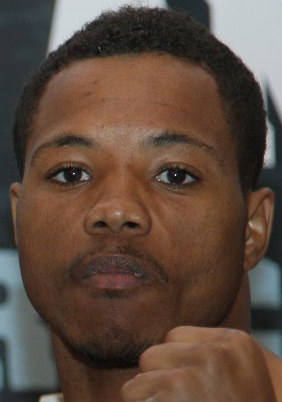 OAKLAND, Calif. — The undercard of the Mikkel Kessler-Andre Ward super middleweight title bout featured a few Bay Area talents, the most popular being welterweight prospect Karim Mayfield, of nearby Daly City, Calif., who has fought on many of Ward’s undercards.

Mayfield (11-0-1, 7 KOs), who scored the only knockout on the undercard by stopping Francisco Santana (11-2, 5 KOs) in the fifth round of their rematch, didn’t disappoint the local fans at the Oracle Arena.

In their first bout, which took place in San Jose earlier this year, Santana, of Santa Barbra, Calif., dropped a close decision to Mayfield in what many observers viewed as a “hometown” verdict for the area fighter.

For four rounds the rematch resembled the first bout in that it involved a lot of grappling and spots of inactivity that made for difficult rounds to score, but early in the fifth Mayfield connected with his best punch, an overhand right, that dropped Santana.

Santana beat the count but could not fend off an energized Mayfield who pressed him to the ropes and swarmed him to the canvas with an assortment of power punches that forced referee Dan Stell to wave the bout off at 2:27 of the round.

Martyniouk, originally from Estonia, won by unanimous scores of 40-36 but the fight was more competitive (and entertaining than the scorecards indicate), although the former amateur standout controlled every round.

Martyniouk flashed fast hands and feet, scoring with his left (jab, hooks and body shots) while displaying nice lateral movement. However, Martinez applied constant pressure and was able to score whenever Martyniouk’s back touched the ropes. Martyniouk stood his ground in the fourth round and got the crowd involved by exchaging with Martinez.