Agbeko and Perez have a lot in common 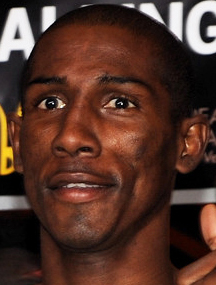 Judging by their personalities, Joseph Agbeko and Yonnhy Perez are as different as night and day.

Agbeko, the bantamweight titleholder from Ghana who burst into fan consciousness with his upset victory over Vic Darchinyan in April, is a brash and gregarious sort who isn’t afraid to predict a KO victory.

Perez, a former Colombian amateur standout who quickly developed into a pro contender, is a quiet and humble man who prefers to do his “talking” in the ring.

But don’t let their demeanor at press conferences and media workouts fool you. The two bantamweights, who will clash in a 12-round bout for Agbeko’s 118-pound belt at the Treasure Island Casino in Las Vegas this Saturday, have much in common, which is why their Showtime-televised fight is must-see TV.

Agbeko and Perez are strong-willed, battle-tested boxer-punchers who left loved ones in their native countries to pursue their boxing careers in the United States.

Agbeko, a free-swinging stalker with an iron chin, leaves behind his wife and two girls — 5-year-old Beyonce and 3-year-old Keira — whenever he travels from Accra, Ghana to John’s Gym in the Bronx, where he’s trained for the last three years.

Perez, an aggressive-but-versatile technician, leaves behind his wife and two boys — 9-year-old Yonnhy and 2-year-old Mateo — whenever he travels from Cartagena, Colombia to Santa Fe Springs, Calif., where he has trained since he turned pro in 2005.

Both fighters spend more time training in the U.S. than they do with their families, which is why they are always in superb condition and hell-bent on winning.

Perez (19-0, 14 KOs) went toe-to-toe with top contender Silence Mabuza for 11 intense rounds before stopping the two-time title challenger in the 12th round of their slugfest in May.

Perez, 30, believes he’s in the same position Agbeko was prior to the Darchinyan fight, that of the unheralded challenger.

Although it was Agbeko’s title that was on the line when he fought Darchinyan, the media spotlight was on the favorite who had earned pound-for-pound status with his consecutive knockouts of Dmitri Kirillov, Cristian Mijares and Jorge Arce.

Now it’s Agbeko, still sky high from his unanimous decision over Darchinyan, who is garnering most of the media attention with his bold predictions of a knockout victory.

Despite his impressive stoppage of Mabuza in the South African’s native Johannesburg (a fight that wasn’t televised in the U.S.), Perez is still an unknown to most American fans and boxing media.

“Nobody expects the guys who are climbing up the ladder to win,” Perez said at a media workout at his Santa Fe Springs gym last Thursday. “People always expect it to be the guys at the top. I really don’t care what people think about my chances in this fight. I’m going up the ladder and I’m going to win.”

Perez, isn’t without his believers. Alex Camponovo, matchmaker for Thompson Boxing Promotions, the 30-year-old Colombian’s co-promoter along with Gary Shaw, says Perez proved his world-class potential when he scored a first-round knockout of Samuel Lopez in May of 2007.

“That fight told me that Perez had the goods to go all the way,” Camponovo said. “Lopez is a rugged southpaw with a very good punch. He was 17-4 when Yonnhy fought him.

“I expected a tough fight because we had brought Lopez to California two months before the fight, so we knew Lopez was ready.”

Perez was 5-0 when he signed with Thompson Boxing. The Southern California-based promotional company kept him busy on their monthly club shows in Ontario and Corona, Calif., fighting him three times in 2006 and six times in 2007. Shaw was brought in mid-way though 2007 and the co-promoter immediately added Perez to his cards that were televised on Showtime’s ShoBox: the Next Generation series.

Perez’s quick rise to world-title contention mirrors the path of 140-pound beltholder Timothy Bradley, who jumped straight from the Southern California club circuit to a title fight that he won in England last year.

Bradley, who is also co-promoted by Thompson Boxing and Shaw, has a lot in common with Perez, according to Camponovo.

“They are similar in that they both work their asses off in the gym,” he said. “The don’t take any shortcuts in their training and because of their work ethic they aren’t afraid to challenge themselves.

“We were aggressive with how they were developed in the beginning of their careers. They fought often and they weren’t built up with “walk-throughs,” at least not on paper. If they blew through an opponent, it was because they earned it, not because the opponent laid down. It helped that they were already confident fighters, but I think the way they were developed built that confidence up even more and they were ready to win the world title when they fought for it.”

We will see whether Perez has what it takes to dethrone a titleholder who is as hungry and dedicated as he is.

“I enjoy fighting the best boxers,” he said at last Thursday’s workout. “Perez is a very dedicated boxer. He is strong, skilled, and undefeated in 19 fights. I bring out everything for fighters like him.

“I’m going to enjoy this fight, and after I knock him out, he will congratulate me. He will thank me for helping him see the light that I am the best bantamweight in the world. I’m the only one who can beat him. I’ll tell him to keep training hard so he can beat the other bantamweight champions.”

Regardless of who prevails on Saturday, fight fans are going to be treated to a fight worth watching.

Thursday’s media workout was my first visit to Perez’s gym in the Santa Fe Springs Activity Center. I wish I had taken the time to check it out years ago. I’m told Perez has engaged in many memorable sparring sessions with good friend and amateur rival Abner Mares before his fellow bantamweight contender moved to Mexico City to train with Nacho Beristain for a few years. In recent years, Perez’s main sparring partner has been featherweight prospect Ronny Rios.

Perez beat Mares, who represented Mexico at the 2004 Olympics, at a tournament in Venezuela before the two met at the 2003 Pan American Games, where Mares out-pointed the older Colombian. Perez is co-managed by Mares’ father.

WILD CARD WITHOUT MANNY AND FREDDY

I dropped by the Wild Card the day before the Agbeko-Perez media workout and the famous boxing club was eerily quiet without the presence of owner Freddy Roach and his star fighter, Manny Pacquiao.

Mayorquin has been working the mitts with 140-pound beltholder Amir Khan, who just began camp for his Dec. 5 defense against Dmitriy Salita, while Reid has looked after undefeated junior middleweight Vane Martirosyan and former Cuban amateur star Guillermo Rigondeaux, who was there Wednesday.

Cruiserweight contender Ola Afolabi also popped in while I was there. For years Afolabi’s only claim to fame was that he was one of the best gym fighters in Southern California. That changed when he cold-cocked Enzo Macarinelli in the ninth round of their fight on the Khan-Marco Antonio Barrera undercard in March. If the Afolabi wins his Dec. 5 bout with Marco Huck in Germany, the London native will become a major player in a division that may have lost yet another champ to the heavyweights.

(By the way, Afolabi thought Andrew Golota was too big for Tomasz Adamek. Reid, who trained Lamon Brewster for the former heavyweight contender’s one-round destruction of the Foul Pole in 2005, correctly assumed that Adamek’s speed would bewilder the bigger man.)

I love talking boxing with fighters and trainers. I had a really good time chatting with Reid’s super middleweight prospect Jason Douglas, a former Canadian amateur standout who is scheduled to fight Aaron Pryor Jr. on Dec. 12 at The Orleans Casino in Las Vegas.

I missed the sparring at the Wild Card gym but made up for it by stopping by the Azteca Boxing Club in Bell, Calif., last week and this week.

Karass, who takes on The Contender grad Alfonzo Gomez in the opening bout of the Cotto-Pacquiao pay-per-view broadcast, has been putting it on Jose Armando Santa Cruz, the former lightweight contender now campaigning at welterweight.

Segura, who defends his 108-pound title against Sony Boy Jaro in Mexico on Nov. 21, has been getting excellent work from former bantamweight title challenger Nestor Rocha and Japanese flyweight prospect Takashi Okada.

Despite having only one pro bout under his belt, Okada hung tough with Segura, who relentlessly pressed forward and ruthlessly attacked his body.

However, the former national amateur champ (I’m told he finished with a 85-15 record) displayed good balance, nimble feet and a fast one-two combination that he put to good use whenever he was able to establish some distance.

Okada, who is being trained by Rudy Hernandez during his Southern California stay, has potential.

I’m glad I got to witness the start of his pro education.