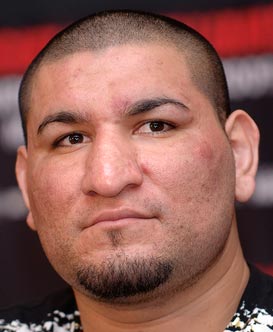 Chris Arreola is wasting no time getting back into the ring after his technical-knockout loss to Vitali Klitschko on Sept. 26.

Arreola has agreed to fight on the undercard of the fight between Paul Williams and whatever opponent replaces Kelly Pavlik on Dec. 5, Arreola's trainer, Henry Ramirez, confirmed. THE RING’s No. 6-rated heavyweight is scheduled to begin two-a-day training on Monday.

No opponent has been signed but David Tua, Ray Austin and Oleg Maskaev are among those who have been mentioned.

The card, scheduled to take place in Atlantic City, N.J. when Williams was to fight Pavlik, could be moved to the Los Angeles area. Arreola lives in Riverside, Calif., which is near L.A.

“The best way to get over a fight is to start preparing for another one,” Ramirez said. “ÔÇª We’re just waiting to hear the name. This doesn’t give him too time off but, hey, the problem Chris has had is too much time between fights. That’s not going to be a problem now.

“Some might feel it’s too soon after a disappointing loss but we don’t feel that way. An opportunity came and we’re getting back into the ring.”

Indeed, some will wonder whether Arreola should take more time off after 10 hard rounds against a monster like Klitschko.

However, Ramirez said he didn’t absorb the physical punishment one might assume he did.

“People want to say he was beaten to a pulp,” he said. “Maybe if I’d allowed the fight to go two more rounds, then he might not be able to fight on Dec. 5. He was over it that night, though. If I thought he wasn’t physically ready, he wouldn’t be fighting.”

The most-exciting possible opponent might be Tua, the big-punching former contender who stopped Shane Cameron in two rounds on Oct. 3 in New Zealand. A matchup between the two brawlers might generate more enthusiasm than the Williams fight, regardless of opponent.

However, Ramirez doesn’t believe HBO will put enough in the pot to pay both Arreola and Tua what they will expect. Williams and his opponent, as the main-event fighters, would get the lion’s share of money.

“Who knows whether it could happen?” Ramirez said. “I have a feeling money will be an issue, though. ÔÇª I spoke to (promoter) Dan (Goossen) and Tua’s name came up but he doubted it would happen. All I know is that we start training tomorrow.

“We’ll start with conditioning and then, assuming next week they have a name, we’ll zero in on who to use for sparring. And we’re not going to relocate; we’re going to train here in Riverside.”