Will over skill: Froch edges Dirrell by split decision 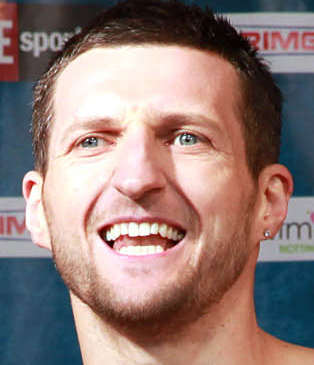 Carl Froch is not the most skilled or talented super middleweight in the world but he is undefeated for a reason. The bruising British beltholder, who is as tough and confident as they come, somehow finds a way to defeat better-skilled and more talented boxers. Photo / Tom Casino-SHOWTIME

You may not think Carl Froch deserved the split decision he was awarded against Andre Dirrell in his native Nottingham, England on Saturday, but you have to give the British slugger credit for finding a way to make things tough on his far-more-talented American opponent.

Froch (26-0, 20 knockouts) emerged from his first fight in Showtime’s Super Six World Boxing Classic 168-pound tournament with two points for the 12-round decision he won with two scores of 115-112 (seven rounds to five with a point deduction from Dirrell). The third judge scored the bout 114-113 for Dirrell (18-1, 13 KOs), who was docked one point for excessive holding in the 10th round by referee Hector Afu.

Afu’s point deduction seemed excessive to most viewers considering that Froch freely and flagrantly engaged in roughhouse tactics from the fifth round to the final bell without being penalized.

It may not have been fair, and it certainly wasn’t fun to watch, but it was exactly what Froch, who appeared hopelessly outclassed in the early rounds, needed to do in order to compete with Dirrell.

Froch has the worst technique of the six super middleweights participating in this unique tournament. The other five participants are also much better athletes than the rugged Englishman.

However, Froch is the definition of “will over skill.” He may not be very fast or accurate, and he certainly isn’t the biggest banger out there, but he finds a way to win.

Froch has done it against other skilled boxers who were better athletes in his last three fights.

Prior to edging Dirrell, Froch scored a dramatic final-round knockout of Jermain Taylor in April. He was trailing on two of the official scorecards when he casually walked down and whacked out the exhausted former middleweight champ.

How does he do it?

In any other sport, a better athlete with superior technique will top a lesser-skilled player. But toughness counts in boxing, and Froch has plenty of that.

He isn’t lacking in confidence, either, and it’s backed by a very good chin.

Froch has also had some luck on his side.

He was lucky Pascal opted to trade with him rather than use his speed and hand-eye coordination to box and move.

He was lucky Taylor always fades in the late rounds and didn’t know how to hold on in the final minute of the final round of their fight.

He was lucky he had the hometown advantage against Dirrell.

Froch doesn’t believe luck has anything to do with his success or his victory over Dirrell.

“I thought I won the fight from round one through round 12,” he said afterward. “(Dirrell is) very fast, (has) very quick hands, (and) good range. If you put speed and timing and accuracy together with negativity, which is what it was tonight, negativity, then you can survive anyone.

“He didn’t want to stand and fight. The minute I got in close quarters, he either held on or fell to the floor.”

Dirrell did slip to the canvas numerous times in the bout, but the one time he landed hard, in the fifth round, was because Froch hip tossed him there.

Up until that point in the fight, the lightning-fast switch-hitter was doing a good job of staying out of range and pot shotting Froch with quick jabs and power punches from a southpaw stance.

Froch could not compete with Dirrell’s speed and did not have the reflexes or range to counter punch the 26-year-old Michigan native. He had to do something. So he did his best to turn the boxing match into a brawl.

Once he saw the frustrated look in Dirrell’s eyes after the body slam, Froch employed a variety of rough stuff, from headlocks to holding and hitting to rabbit punches (blows to the back of the head), over the next seven rounds.

“What was I supposed to do?” Froch said. “If he’s not going to stand and fight, like a man, like a warrior, then what can I do but take what’s in front of me.

“My fans come to see a fight. They know what I’m capable of and I wasn’t able to show what I can do. Every time I got close and tried to have a trade off he leaned right back and held or ducked down or fell to the floor.

Froch’s tactics took Dirrell out of his game from rounds six through 10. Dirrell abandoned his jab, which was working well in the early rounds, and he initiated most of the clinches, as Froch claimed.

However, the worst thing the young and largely unproven boxer did Saturday night was split his concentration between his ever-advancing opponent and the referee, to whom he repeatedly complained.

Afu’s point deduction in the 10th was a sign that all of Dirrell’s protests were wasted breath. He should have concentrated on Froch and increasing his offense as the Englishman lunged forward. When Dirrell let his hands go in rounds 11 and 12, he got results, occasionally buzzing the ultra-tough titleholder.

Although he lost his way for a few rounds, Dirrell thought he did enough to win the fight.

“We knew where we are,” Dirrell said about the scoring of the fight. “(Froch) came on strong in the late rounds but I boxed enough to get a decision.

“I still don’t know why (the referee) took a point from me. I’m still clueless (about losing) a point for leaning on him when he (had) been holding (and) hitting me in the back of the head. He (was) pushing me down to one knee. He (was) rough the whole fight.”

Although disappointed, Dirrell remained positive after the fight and viewed his first 12-round bout as a learning experience.

“I’ve worked my ass to get where I need to be,” he said. “Now I know can go 12. I just got to get in the gym, learn from my mistakes, and execute my game plan a little better next time.”

He had better do just that. His opponent in the next round of the tournament is Arthur Abraham, the formidable former middleweight titleholder who knocked out Taylor in chilling fashion on Saturday. Abraham is every bit as rough and tough as Froch, but a much better technician.

Froch’s next opponent in the Super Six is Mikkel Kessler, the Danish beltholder who is considered the best technician of the group by most fans and media.

Froch says he can’t wait to get it on.

“I got a slippery little sucker (Dirrell) out of the way,” Froch said. “Now I’ll fight a proud warrior. Mikkel Kessler will stand and have a fight and exchange blows at times. He’s a slick boxer but at times he will trade with me and that’s what fans want to see. Kessler will bring that fight. It will be a massive fight.”

And Froch will likely be a massive underdog in that fight, especially if Kessler wins his first round bout against Andre Ward on Nov. 21.

Of course, that role is nothing new to Froch.

The supremely confident underdog is no doubt looking forward to once again finding a way to beat a fighter with better skill, talent and technique.