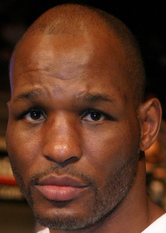 Andre Dirrell required two attempts to make the super middleweight division-limit of 168 pounds, but was all smiles after tipping scale at 167¾ on Friday before several thousand people at the famed Market Square in Nottingham, England. Dirrell will challenge Carl Froch at the Trent FM Arena in Nottingham. It will be the first fight for the undefeated super middleweights in the Super Six World Boxing Classic. Photo / Tom Casino-SHOWTIME

Super middleweight beltholder Carl Froch and his challenger Andre Dirrell both weighed in at 167¾ pounds on Friday in front of an estimated crowd of 3,000 people at the famed Market Square in Nottingham, England.

Froch (25-0, 20 KOs), a Nottingham native, will attempt to defend his title on home turf at the Trent FM Arena, where a sellout crowd of about 8,000 fans is expected.

The 12-round bout is one half of the first stage of the inaugural Super Six World Boxing Classic Cup on Saturday, Oct. 17, and will be broadcast live on Showtime in the U.S., beginning at 8 p.m. ET/PT (delayed on the West Coast).

Dirrell (18-0, 13 KOs) made weight on his second attempt, having weighed in earlier in the evening at 168.4 lbs. He had up to two hours to make the official weight for the title fight, but took approximately 45 minutes to return to the scales at 167¾.