Vazquez-Marquez IV in the works 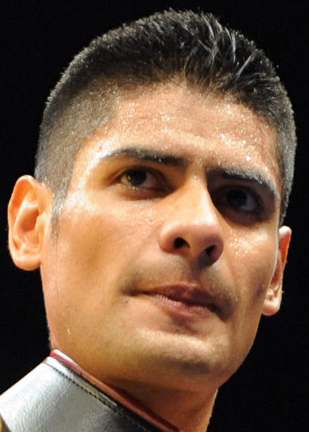 Israel Vazquez says he’s focused on the man he’ll face on Saturday night in Los Angeles, Angel Priolo. And names such as Juan Manuel Lopez and Chris John have come up as possible opponents for the near future.

However, Vazquez’s team acknowledges that one matchup supersedes all else: Vazquez-Marquez IV.

Vazquez, 31, and Rafael Marquez, who engaged in a brutally classic trilogy in 2007 and last year, apparently both want a fourth fight as soon as possible because they can’t make anywhere near the same money fighting anyone else.

The fight would likely take place on Showtime, the network that televised the first three unforgettable installments.

“I know people are talking about Lopez and John,” said Frank Espinoza, Vazquez’s longtime manager. “At this point of Israel’s career, though, he wants to make as much money as he can. The only way he can do that is to fight Marquez again. He won’t make good money fighting these kids.

“And, in all reality, there aren’t a lot of names out there at 126 (pounds), where he wants to campaign at.”

One problem that will have to overcome is Marquez’s uncertain management situation.

Marquez claims that he is no longer under contract with promoter Gary Shaw, who counters by saying the fighter “is trying to get out of his contract.” Also, Marquez and brother Juan Manuel apparently have released manager Jaime Quintana, further complicating efforts to make a fourth fight.

However, there is reason to believe the fight will happen. Richard Schaefer of Golden Boy Promotions – which promotes Vazquez and Juan Manuel Marquez – received permission from Shaw to try to put together Vazquez-Marquez IV with the provision that Shaw is somehow compensated.

“I’d like to be a part of it,” said Shaw, Marquez’s promoter for all three fights against Vazquez. “If I can’t be, then I want what I’m deserving of.”

He and Schaefer are on the same page.

“Look, I don’t want to be in the middle of that,” he said. “I’m not interested in doing anything with Marquez unless both Gary and Jaime Quintana are on board and taken care of. I talked to Gary and said, with his permission, that I would try to work out a deal with Marquez’s people that makes sense for me.

“Then I’d go back to Gary and Jaime and see if it makes sense for them. I’m willing to buy him out, pay for this, do that, whatever structure it should be.”

The next question is should a fourth fight be made?

From an entertainment perspective, the answer would probably be yes. It seems most fans loved the first three fights and don’t see any reason why another one would be any different.

However, some wince at the thought because of the savage nature of the series. They’re not entirely comfortable with two damaged fighters – which is how some perceive them – doing battle again.

Vazquez showed no signs of decline during the series. And he’s had a 19-month hiatus – because of eye surgery – to give his body time to heal. He says he feels great and “has a lot more to accomplish in boxing.”

One never knows what impact constant punishment will have on a fighter’s body, though.

Espinoza and Schaefer agree that Vazquez’s fight against Priolo, a journeyman will little chance to win, at Nokia Theater will give them and everyone else an idea of where Vazquez stands.

“History has shown that such tough wars do take something out of you,” Schaefer said. “Take Erik Morales. You saw in his last fight or two signs of what so many tough fights over a long period can do. The same with (Marco Antonio) Barrera.

“That’s why this fight [on Saturday night] is so important. We’ll see if those fights have taken anything out of Israel and how the eye holds up.”

Again, Vazquez isn’t worried. He said he has felt good in workouts, during which he and trainer Rudy Perez have been working more on defense. And he said he doesn’t even think about the eye.

Vazquez also doesn’t want to look past Priolo but admits he’s intrigued by the idea of a fourth fight against his nemesis both because the fans want to see it and because he feels he has unfinished business.

Vazquez retired on his stool with a badly broken nose after the seventh round in the first fight but won the next two, a sixth-round TKO and a split decision. A fourth fight, he said, could settle once and for all who is the better of the two.

“Yes, I want a fourth fight,” Vazquez said through a translator. “I want to clarify things. I know some people think I didn’t win the third fight, this and that. That’s one reason I want the fight. And I know the fans want it. So why not?”

And what about those who worry about his health?

“Listen, we’re professionals,” he said. “We were made for boxing, to hit and be hit. You have to do everything possible to get the victory. That’s what we do. And I don’t see anything wrong with it.

“People in the media think I’ve gone downhill. The test will come on Saturday. Everyone’s minds will be clear once they see me fight.”