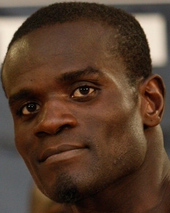 HBO is televising Pavlik-Williams and Clottey-Quintana, a scheduled 10-round junior middleweight bout, will be part of that live broadcast.

Clottey (35-3, 20 KOs) is coming off a competitive split decision loss to welterweight titlist Miguel Cotto on June 13. The New York city-based Ghanaian thought he had secured a bout with titleholder Shane Mosley that was tentatively scheduled for Dec. 26 but when the backing for that fight (HBO) fell out, he was offered a spot on the Pavlik-Williams undercard.

Quintana's willingness to fight Clottey was stroke of luck for the tough African fighter. The crafty Puerto Rican southpaw is still highly regarded despite being stopped in one round in this rematch with Paul Williams last year.

Quintana (26-2, 20 KOs), who won a 147-pound title when he handed Williams his only loss last January, is THE RING's No. 7-rated welterweight. Clottey, who beat Zab Judah for a belt last year, is the magazine's No. 4-rated contender.

The winner of their showdown positions himself for a significant fight, at welterweight or junior middleweight, in 2010.