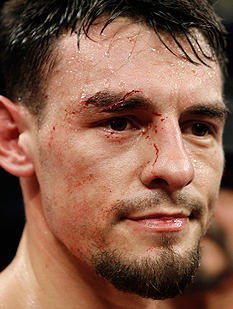 The promotional difficulties that put Robert Guerrero’s career on hold in 2007 and 2008 have resurfaced, creating a mess.

Goossen Tutor claims it has the rights to Guerrero in light of the ruling. However, Guerrero has been fighting for Golden Boy Promotions.

“As a practical matter, Goossen Tutor Promotions is still the promoter of Mr. Guerrero and I’ll leave it to my client to discuss his future promotional plans,” Nomi Castle, Goossen Tutor’s attorney, said in a statement.

Guerrero’s attorneys said in a statement that Tuesday’s ruling was based on a technicality and that the contract with Goossen Tutor is now expired.

The fighter left Goossen Tutor in 2007, claiming his contract had expired. Goossen Tutor said the contract included extensions for injuries or suspensions and was not expired.

The arbitrator ruled in Guerrero’s favor last November. The question was: Who actually made the ruling?

Then-CSAC Executive Director Armando Garcia conducted the arbitration and issued a decision as per the state agency's rules, according to Guerrero’s attorneys, although Garcia failed to sign the award. Goossen Tutor claims the decision was authored by Deputy Attorney General Earl Plowman and never even seen by Garcia.

Goossen Tutor apparently was able to convince Superior Court Judge Robert H. O’Brien that Garcia was the arbitrator yet had not made the decision or signed the award.

“This was the correct decision,” Castle said. “It was the one we were after and the court recognized that there was corruption and fraud on the part of the Commission and the way they handled this matter.”

“The Superior Court’s decision was not based upon the substantive merits of Guerrero’s claims against Goossen Tutor Promotions but was based upon the California State Athletic Commission’s failure to obtain arbitrator Armando Garcia’s signature on the award, which Garcia indicated under oath in July of this year that he was prepared to sign,” the statement read.

The statement goes on to say: “The vacatur of the arbitration award by the Superior Court has no effect on the validity of the Guerrero-Golden Boy Promotional Agreement, and Golden Boy remains the exclusive promoter of Robert Guerrero.”